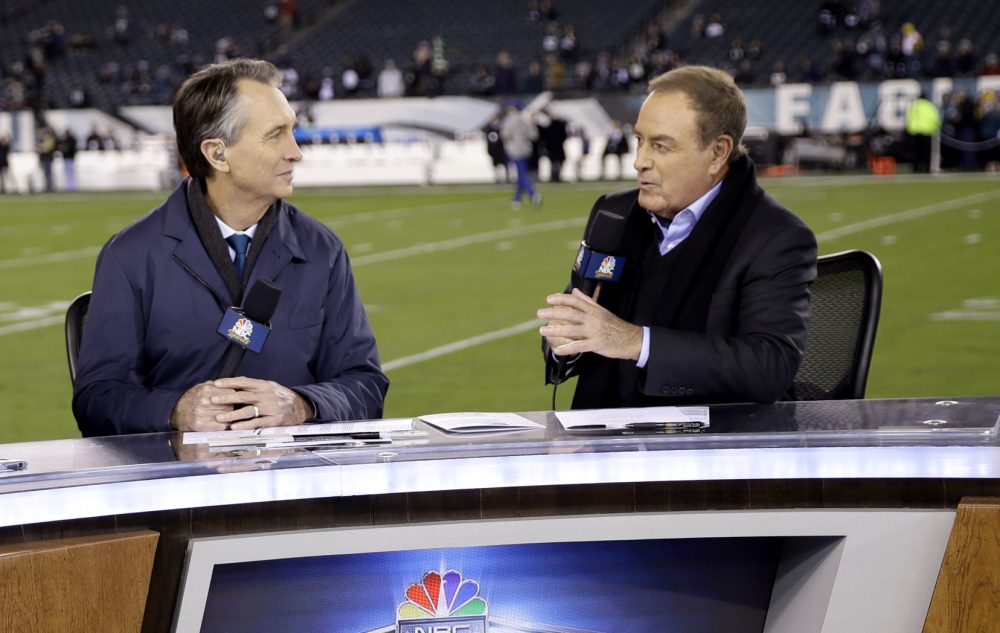 You don’t need to hail from the cities of Cleveland and Pittsburgh to know that the rivalry between the Browns and the Steelers has been reborn.

“Nothing lasts forever,” said Al Michaels during a conference call with the media Wednesday afternoon. “Even though it’s been a one-sided rivalry, I think it’s the dawn of maybe a new era here. Pittsburgh is annually good and Cleveland should be pretty good for a number of years when you have a really good quarterback, a lot of fun. You have a great running back, a great offensive line. You have a head coach who did a hell of a job this year.

“I think Cleveland-Pittsburgh is one of the better rivalries going forward.”

Michaels and Cris Collinsworth, with Michele Tafoya as the sideline reporter, will call the Sunday night wild card game between the AFC North Division rivals. Tony Dungy, who will be part of the team that calls the Washington-Tampa Bay wild card game Sunday and played two years for the Steelers, also weighed in on the teams’ history.

“I can remember the first time I played (the Browns) in 1977, going to Cleveland, Jack Lambert told me, ‘Whatever you do, once you come out of the dugout, don’t take your helmet off on the field because these fans don’t like us, they’re crazy,’” said Dungy, who won a Super Bowl with the Steelers in 1978. “As a rookie, I put that in my memory bank, I never took my helmet off. (Lambert) got thrown out of the game for taking his helmet off. I remember looking at him and saying, ‘What did you just tell me?’

“It was that type of game. We had some back and forth with those guys. They were always tough games. Healthy respect. But it was pretty strong, no question about it.”

While the Browns and Steelers engaged in fierce battles near the end of the 1900s — including seven straight Cleveland wins between 1986-89 — it’s been a one-sided matchup — the Steelers have won 36 of 45 games — since the Browns returned to Cleveland in 1999.

But the rivalry has tightened recently — the teams have split regular-season meetings the last two seasons, battled to a tie in 2018 and had three games decided by less than four points in 2017.

“You know what’s kind of interesting about it is that now the Cleveland Browns are the power football team,” said Collinsworth, who faced both teams twice a year as a member of the Cincinnati Bengals from 1981-88. “The Pittsburgh Steelers are the throw-it-quick, passing kind of team. Forever you always thought of the Steelers as … they’re going to run it right down the field.

“It’s power against power now. It’s really made the rivalry a little bit better for me.”

The commentators referenced the fact that Cleveland will be without coach Kevin Stefanski and starting left guard Joel Bitonio, who both tested positive for COVID-19 and will miss the Browns’ first playoff game in 18 years.

“They’re going to miss Kevin Stefanski not being there on the sidelines,” Dungy said. “The actual mechanics of it are not going to be that different. They’re all in the process of formulating the game plan and the calls. … (offensive coordinator) Alex (Van Pelt) will have a good feel for that.”

“I think (the loss of Bitonio) impacts (the battle on the line) a lot in part because of who they’ve got behind, between Nick Harris and Chris Hubbard, the guys that were supposed to take his place,” Collinsworth said. “Who fits into that guard position now? Especially when you’re going against the likes of (Stephen) Tuitt, (Cameron) Heyward, (Tyson) Alualu … the pass protection being such a key component.”

The panel was asked what factors might lead to Cleveland sustaining the success it’s had this season. Collinsworth broke out the word that has been embraced in recent years by the franchise — analytics — during his response. Dungy countered with an old-school answer.

“I talked to Kevin Stefanski a few times. He’s changed the attitude and the culture, nothing to do with analytics,” Dungy said. “They chart on offense the number of times they knock a defensive player off his feet — they keep track of that — and they’re doing it at a very high rate. The leader in that category is Jarvis Landry.

While there was minor debate on why Cleveland has thrived or how it might continue to rise, everybody was in agreement that the Browns’ showdowns against the Steelers were never going to be meaningless.

“It’s always going to be a rivalry,” Dungy said. “I think there was a time when the Browns had never won a game in Three Rivers Stadium or hadn’t won in years and years. They were still knock-down, drag-out dogfights. Every time we went to Cleveland, it was a dogfight.

“I think you’re going to see the same type of game Sunday night.”

Kevin Stefanski “disappointed” he and others will miss playoff game but determined to “find a way to get a win”
Mike Priefer “honored and humbled” to be acting coach; Alex Van Pelt will miss Kevin Stefanski’s sense of humor, calm demeanor during game