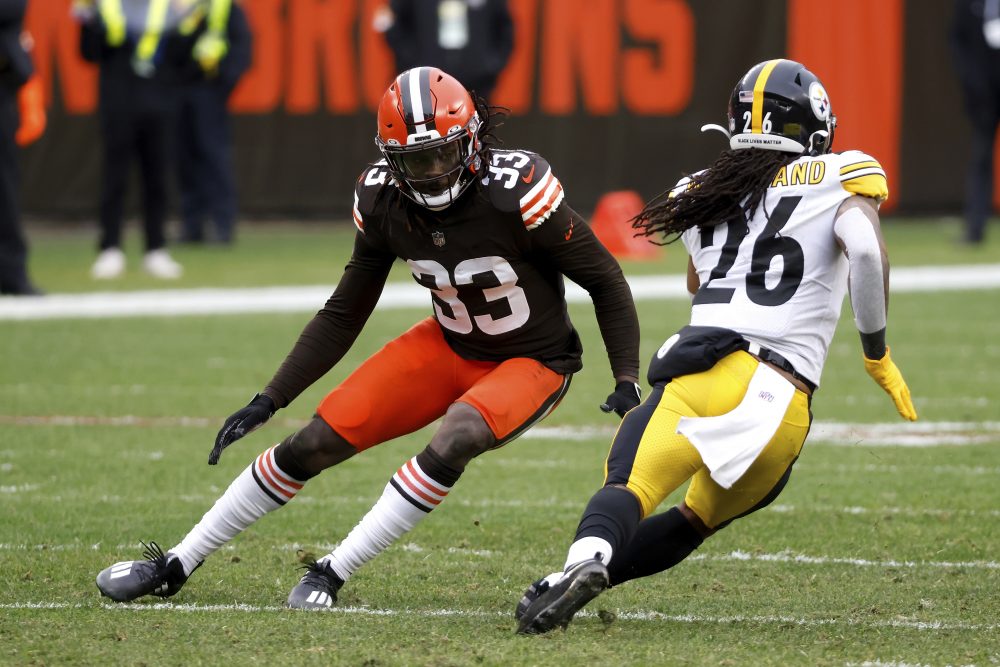 The Browns had another COVID-19 setback Thursday after a one-day respite.

Strong safety Ronnie Harrison tested positive, was placed on the COVID-19 reserve list and will miss the playoff game Sunday night against the Steelers, adding to the list of players and coaches sidelined by the virus.

The team facility remained closed for the third day in a row and practice was canceled for the second straight day.

The Browns hope to be able to practice Friday and Saturday, but the NFL hasn’t given permission. Dr. Allen Sills, the league’s chief medical officer, told NFL Network “some” transmission of the virus within the team was found this week for the first time. The league is trying to prevent an outbreak and keep the game on schedule.

Linebacker B.J. Goodson was activated from the list Wednesday.

“Coach Stefanski talks about it all the time, we have to hit the curveball, and we have been thrown another one,” receiver Jarvis Landry said. “The last couple of weeks have just been tough for us, but at the end of the day, we have to answer the call each and every time.”

Harrison returned for the regular-season finale Sunday after missing four games with a shoulder injury. Karl Joseph will fill his starting role.

“Since he has gotten here, he has been a guy who I have been excited about to be able to take the field with knowing his versatility and his ability to make plays,” Landry said of Harrison. “He has done that for us in a countless amount of games. He is definitely vital to our defense and to our team, and it sucks that he is going through this and missing more games due to COVID.”

Defensive coordinator Joe Woods said he doesn’t know if he’ll have Ward, his No. 1 corner, back from the COVID list in time to play Sunday.

If Ward can’t play, Robert Jackson would make his second straight start — the second of his career. He struggled against the Steelers on Sunday, including allowing the long completion that set up a late touchdown.

“Hopefully he can make that jump this week, because I definitely think they’re going to target him,” Woods said.

Woods would love to have Ward at his disposal but said it was too early to tell if he would.

“We will wait and see,” Woods said. “I do not know what the outcome of that is going to be, but we do have guys who have some experience and got some experience last week playing so I feel like we will be good either way.”

The defense should get a boost with the return of Goodson. He missed two games following a positive test.

“He’s the quarterback of our defense,” Woods said. “It’s definitely good to get back a player that’s played well for us.”

Bitonio’s positive test hit differently than those of others who’ve had to miss games. He’s the longest-tenured player on the roster and will miss his first chance to play in a playoff game.

“He is important to our team. He is important to the Cleveland Browns and the history that we have accomplished this year,” Landry said. “It sucks what he is going through. We know how much this game means to Joel and what he would give to be out there. That is definitely something that we all have in mind.

“This is definitely one for Joel, absolutely.”

“We feel for him,” Mayfield said. “I think that would be the only thing taking away from the excitement.”

Landry revealed Michael Dunn is in line to start for Bitonio. Dunn was undrafted in 2017, spent time in the AAF and XFL, didn’t appear in a game until this year and has played one snap on offense.

The Steelers announced their request to allow more fans into Heinz Field was denied by the state. The state limits total people in the stadium to 2,500, so the Steelers will permit only family and friends.

Cornerback Joe Haden, who began his career with the Browns, remained on it. He reportedly tested positive Saturday and won’t be eligible to play.

Rookie receiver Donovan Peoples-Jones (concussion) wouldn’t have practiced if the Browns had one.

“He is definitely in a positive state of mind,” Woods said. “OV did a great job.”