Relying on run game, rested Nick Chubb could be recipe for success 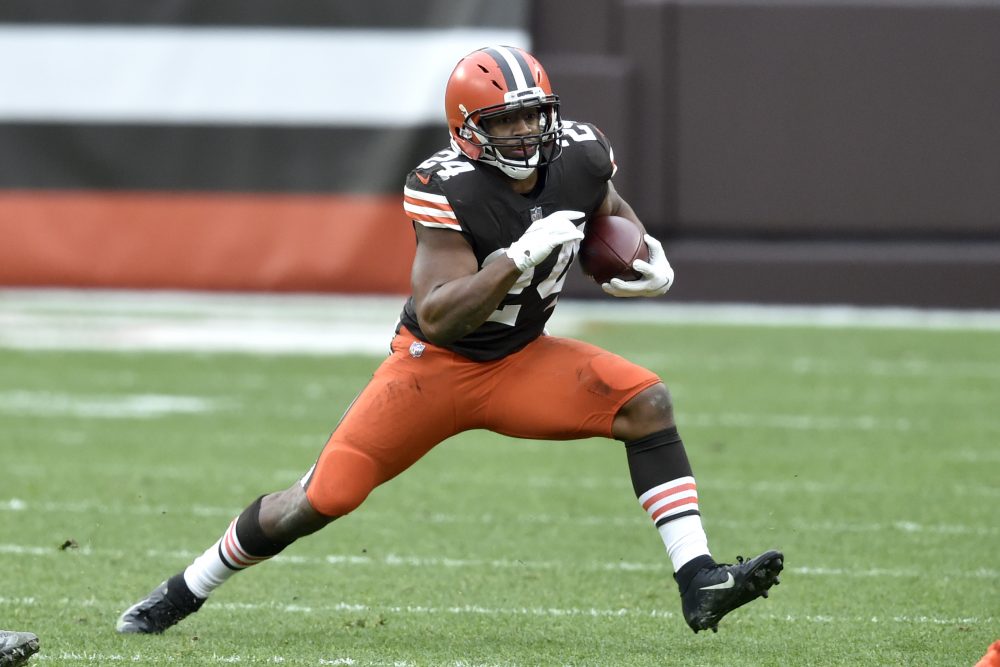 The season has shown when the Browns run the ball effectively they most often win.

That approach doesn’t figure to change Sunday night, even without coach Kevin Stefanski and three-time Pro Bowl left guard Joel Bitonio, who are on the COVID-19 list and will miss the playoff game against the Steelers.

“That is what we have done when we have had success all year,” said right tackle Jack Conklin, who was named first-team All-Pro on Friday. “It has been running the ball, and I do not think we change that now. It is always the goal, and I think that is what really the offensive linemen want to do.

“When you can run the ball, it helps you in all other aspects of the game. When you are running the ball well, the play-action works well and drop backs. Some teams are more worried about the run, and that leads to open passers and it really just takes the fight out of a lot of guys when you are running them over in the run game.”

Conklin’s availability is in question after he missed practice Friday with an illness, and Michael Dunn, who was promoted from the practice squad, will fill in for Bitonio after logging one offensive snap during his NFL career. Kendall Lamm will replace Conklin if necessary.

Obviously, a big factor in Cleveland’s rushing attack is Nick Chubb. Though the Browns have employed a 1-2 punch at running back with Kareem Hunt spelling Chubb, there’s no doubt he’s the No. 1.

Despite missing four games with a knee sprain, Chubb ranked among the NFL rushing leaders in yards (seventh with 1,067), yards per carry (fourth, 5.6) and touchdowns (tied for fourth with 12). His TD count is the most for a Cleveland running back since Leroy Kelly’s 16 in 1968.

With Stefanski wanting his backs fresh for the playoffs, Chubb’s carries were cut to 25 over the final two regular-season games. He rushed for 104 yards on 14 attempts in a 24-22 win over the Steelers in the finale, but most of the yards came on 47-yard TD on the opening drive that pushed him over 1,000 yards.

“It is important to have those guys fresh throughout the course of the game,” said offensive coordinator Alex Van Pelt, who will take over play calling for Stefanski on Sunday. “We will have a plan going in and how many touches guys will get, and we will try to stick to that.”

After limited attempts the past two weeks, Chubb is likely champing at the bit to play a significant role in the Browns’ first playoff game since 2002.

“I think Nick is extremely eager to get back out there any and every Sunday and compete. That is just the type of guy he is,” quarterback Baker Mayfield said. “This is why we love to have him here.

“I am not in control of how much we see of him, but I respect his game,” Tomlin said. “I have always respected his game. I did not see anything last weekend in the stadium that I had not seen over the course of his career in Cleveland or even in Athens, Ga., prior to that. There is a consistency in his play that is really awesome.”

Cleveland had had more success running straight ahead in two games against the Steelers.

“Obviously, they are a great defensive team,” wide receiver Jarvis Landry said. “They have always been that way since as long as I can remember. We are going to have to be as sound as we can on the offensive side of the ball for sure.”

“Just being physical and that is the key, guys finishing their blocks and extra effort,” Hunt said. “Everybody has to have those extra-effort plays, playing through the whistle.”

Myles Garrett vows to treat 1st playoff game like it’s his last: “Anything we get, we are going to have to take”
Denzel Ward won’t play vs. Steelers, but Ronnie Harrison, Malcolm Smith, Harrison Bryant activated from COVID reserve list