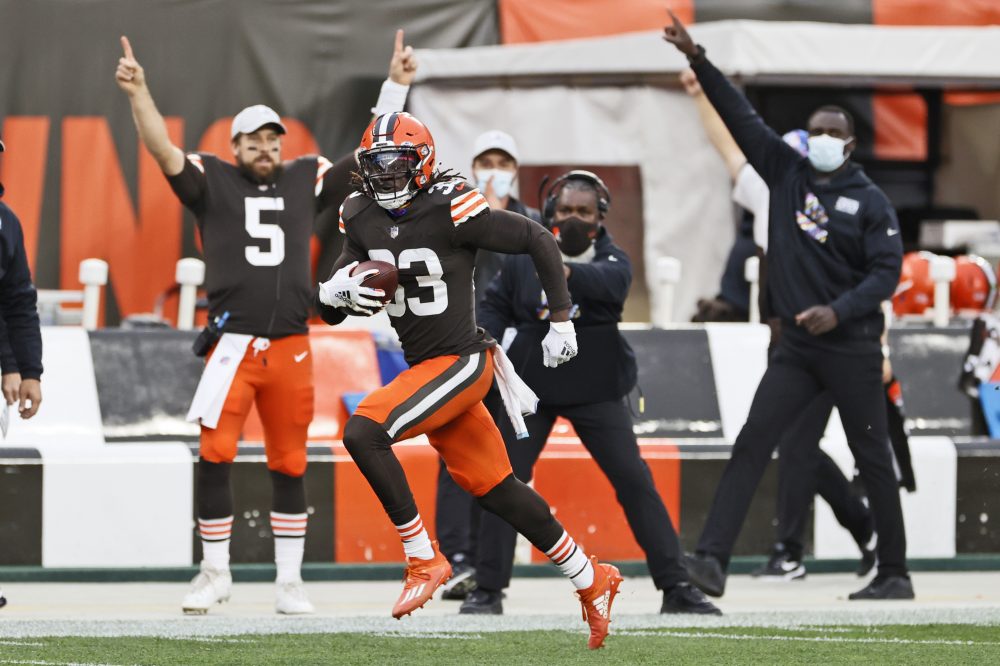 The Browns got three more players back from the COVID-19 reserve list Saturday. They took the field for a second straight day for an extended walkthrough. They prepared to depart for Pittsburgh for the first playoff game in 18 years.

The news wasn’t all good.

No. 1 cornerback Denzel Ward remained on the COVID list and won’t play Sunday night. He tested positive Dec. 31, so the minimum 10-day isolation period had passed, but wasn’t cleared to return.

Nickelback Kevin Johnson remained on the list, as well.

With coach Kevin Stefanski and Pro Bowl left guard Joel Bitonio also among those out after testing positive, the short-handed Browns are a touchdown underdog to the hated Steelers.

“We are not paying attention to too much outside noise. Just understanding that we have a great opportunity to play football in January in a playoff game. Regardless of the situation, we still have to show up and go play.”

Strong safety Ronnie Harrison, linebacker Malcolm Smith and tight end Harrison Bryant were activated from the reserve list Saturday among a flurry of roster moves. They participated in the walkthrough at 1 p.m.

Right tackle Jack Conklin’s status didn’t change and he remained questionable with an illness. He drove separately to Pittsburgh.

No. 2 cornerback Terrance Mitchell (not injury related) was also listed as questionable, but the expectation is he’ll play. He also traveled separately.

After a two-week stretch of COVID cases that repeatedly closed the team facility, the Browns took extra precautions. The coaches also drove to Pittsburgh after six members of the staff tested positive over the last two weeks, keeping them separate from the players and providing more room on the flight.

The return of Harrison was a surprise.

He and practice squad linebacker Montrel Meander tested positive for COVID-19 on Thursday and were placed on the reserve list. But they tested negative multiple times since the positive, and the NFL cleared them to be activated.

Harrison returned for the regular-season finale vs. the Steelers last week after missing four games with a shoulder injury. In 11 games and seven starts, he had 38 tackles, an interception returned for a touchdown, seven passes defensed, a sack and a fumble recovery.

“The guys love being around Ronnie,” coordinator Joe Woods said. “He is just like the kid on the playground who just loves to play football. He brings a lot of energy to our defense.

“He was off a little bit, but that was just him getting his legs back underneath him. I feel like he will definitely play better, but having him out there is big for us. He is always around the football.”

Safety Jovante Moffatt was determined not to be a close contact of someone who tested positive, as originally thought Friday, and remained on the roster.

Defensive tackle Joey Ivie was released from the practice squad.

Robert Jackson is expected to get the starting call for the second straight week — and second time in his career — in place of Ward. Jackson struggled in the finale.

“I am totally confident in Robert and have seen what he has done,” Woods said. “For him to go out in that game and the magnitude of that game, I felt like he did some good things, and some of the other things that he got beat on, we can get him a little bit better prepared technically to have some success.”

The Browns have lost 17 straight in Pittsburgh and are 2-23-1 against quarterback Ben Roethlisberger. Add to that another week filled with adversity.

“Just win. You can’t have any other mentality,” defensive end Myles Garrett said. “Anybody can be beat. It does not matter who you have up. You are paid to be a performer, no matter where you sit on the depth chart — first or third.

“Nobody is going to sit here and tell you that we are counting ourselves out. These guys are hungry, and we are going to take it to them.”

Receiver Jarvis Landry said that must start from the first snap.

“The way that I have always approached the game was you always take the game to the opponent,” he said. “You never try to match somebody else’s intensity. You always start with the knockout punch. That is something that I will definitely be transparent with my team about. If not, then it is more just tell them, ‘Just watch how I play today and match what I am doing today.’ We will see if that is enough.”

Relying on run game, rested Nick Chubb could be recipe for success
Browns’ final COVID-19 tests all come back negative before tonight’s playoff game in Pittsburgh