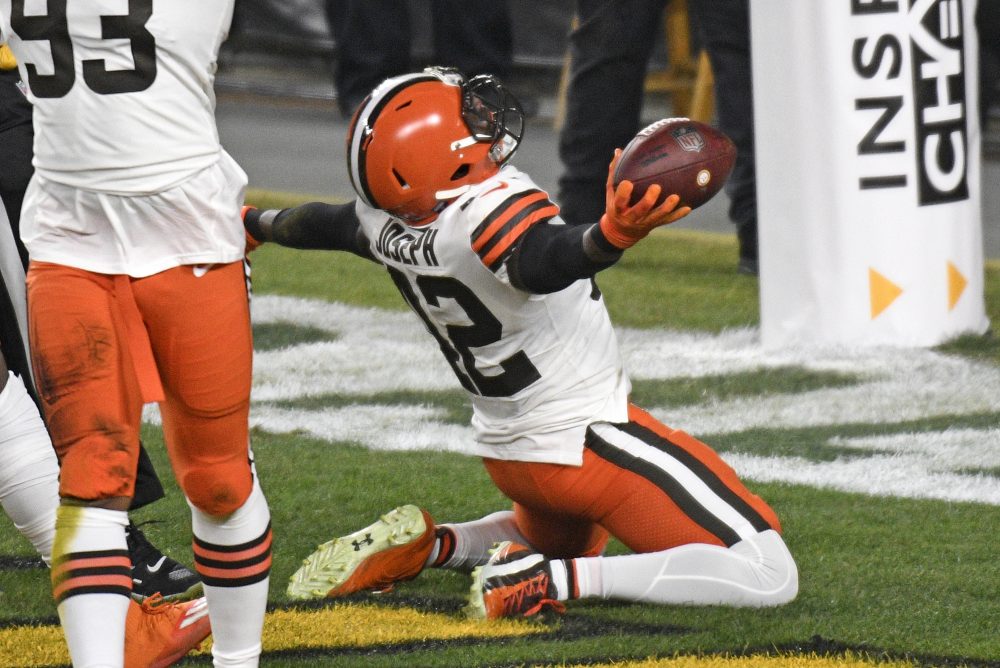 The Browns established months ago they were resilient.

They crossed over to remarkable Sunday night in Pittsburgh.

The Browns said for a week they weren’t satisfied with just making the playoffs for the first time in 18 years. They proved it with a 48-37 win at Heinz Field, which had been a house of horrors for nearly two decades.

It hosted only happiness Sunday for the Browns.

The joy began on the opening play, a fumble recovery for a touchdown by safety Karl Joseph after a snap over the head of aging Steelers quarterback Ben Roethlisberger. It didn’t stop.

“We believed,” quarterback Baker Mayfield said to NBC on the field after the win. “People on the outside don’t matter to us. It’s on the inside and we believed the whole time and that’s all that matters.”

The touchdown-underdog Browns beat the odds, overcame a week of incredible adversity and stunned coach Mike Tomlin, Roethlisberger and the Steelers.

The Browns did it without coach Kevin Stefanski, top cornerback Denzel Ward and Pro Bowl left guard Joel Bitonio after they tested positive for COVID-19. They did it without practicing Wednesday and Thursday.

Steelers receiver JuJu Smith-Schuster suddenly has the offseason to contemplate just how far the Browns have come. He will have to wait at least another week before having a complete answer.

“I think they’re still the same Browns teams I play every year,” he told reporters during the week. “They have a couple good players on their team, but at the end of the day, I don’t know. The Browns is the Browns.”

Mayfield, who went 21-for-34 for 263 yards, three touchdowns and a 115.2 passer rating in his first playoff appearance, quoted Smith-Schuster in a pregame Instagram post that included a hype video.

Defensive end Myles Garrett was asked Friday if the Browns had already shown they’re not the same old Browns.

“We will have to prove it when we see them on Sunday,” he said.

The Browns set an NFL-playoff record with 28 first-quarter points. The most points the Browns had scored in a first quarter in the postseason were 14 on Dec. 26, 1954.

Joseph got the party started by jumping on the snap from Pro Bowl center Maurkice Pouncey that sailed past Roethlisberger. Garrett nearly jumped on the ball at the 1, but it squirted into the end zone, where Joseph recovered.

Nickelback M.J. Stewart Jr., only playing because nickelback Kevin Johnson is on the COVID list, followed with his second interception in two straight games against the Steelers. He had a pivotal pick last week in the 24-22 win that clinched the Browns’ first playoff spot since 2002.

Three plays after Stewart’s interception on a terrible short throw by Roethlisberger, Mayfield threw down the left seam for receiver Jarvis Landry (five catches, 92 yards, TD), who made safety Terrell Edmunds miss for a 40-yard catch-and-run for a touchdown.

After the defense stuffed a run on third-and-1, the Browns went 65 yards in six plays. Kareem Hunt drove his legs to finish an 11-yard touchdown run.

Defense gets off to blazing start, sets table for upset playoff victory with barrage of takeaways

Safety Sheldrick Redwine grabbed a tipped pass and returned the pick 30 yards to the 15-yard line. Hunt quickly scored from 8 yards behind a block from pulling center JC Tretter for a 28-0 lead with 1:56 left in the first quarter.

Defensive end Porter Gustin added a diving interception in the second quarter on a pass tipped by tackle Vincent Taylor. It was another example of backups coming up big for the Browns, as they have in a year filled with injury and COVID absences. The five people responsible for the takeaways have come off the bench for some or all of the season.

Roethlisberger was 20-for-30 for 177 yards, three interceptions and a 42.6 passer rating in the half. He finished 47-for-68 for 501 yards, four touchdowns, four interceptions and an 85.5 rating. The completions set an NFL record for any game.

While Roethlisberger looked like a quarterback on his last legs, the Browns looked like an up-and-coming threat in the AFC.

Tight end Austin Hooper (seven catches, 46 yards, TD) scored the final touchdown of the half with 34 seconds left on a 7-yard catch when he was uncovered on a blitz. The nine-play, 64-yard drive was a strong answer after the Steelers had cut the deficit to 28-7.

Like he did in the finale, Mayfield made a clutch play with his legs, scrambling for 6 yards on third-and-6 from the Cleveland 40. A 24-yard swing pass to Chubb and a 12-yard Hunt run set up the score.

The players made special teams coordinator Mike Priefer and offensive coordinator Alex Van Pelt look like geniuses in their temporary roles as acting coach and play caller, respectively, with Stefanski watching from his basement at home.

Priefer, a native of Cleveland, got emotional talking about what the win meant for the fans.

“The faster, more physical team was going to win the game, and I thought we did a good job in that regard, as well,” he said. “They never batted an eye.”

But nothing’s easy in Cleveland.

So fans watched the Steelers kick a 49-yard field goal to end the first half and score touchdowns on their first two possessions of the third quarter to pull within 35-23 with 2:57 left in the quarter. The memories of a blown late lead in the playoff game 18 years ago in Pittsburgh returned.

When Tomlin decided to punt after facing fourth-and-1 from the Pittsburgh 46-yard line on the first play of the fourth quarter, the Browns made him pay. Landry had a 17-yard catch-and-run on third-and-2 from the Cleveland 28 and caught a 15-yarder to set up the backbreaker.

Van Pelt made the call of the game on second-and-10 from the Steelers 40, and the Browns — with All-Pro right tackle Jack Conklin on the sideline since the second quarter with an injured hamstring — perfectly executed a screen pass to Chubb, who broke a couple of tackles on the way to a 40-yard touchdown and 42-23 lead with 12:32 left.

The Steelers scored again, but two field goals by Cody Parkey and an interception by linebacker Sione Takitaki provided the cushion before a late Steelers TD.

The Browns won’t be able to celebrate too long, as they have a date with quarterback Patrick Mahomes and the defending Super Bowl champion Chiefs on Sunday afternoon.

“It’s back to work,” Chubb said. “We’re not going to celebrate this win too much longer. It’s time to get back to work and focus on our next opponent.

“I’m excited, but this is just the first round. We have a long ways to go.”

The Browns could get back Stefanski, Ward, Bitonio, Johnson and receiver/special teamer KhaDarel Hodge off the COVID list. They’ll be the underdog regardless.