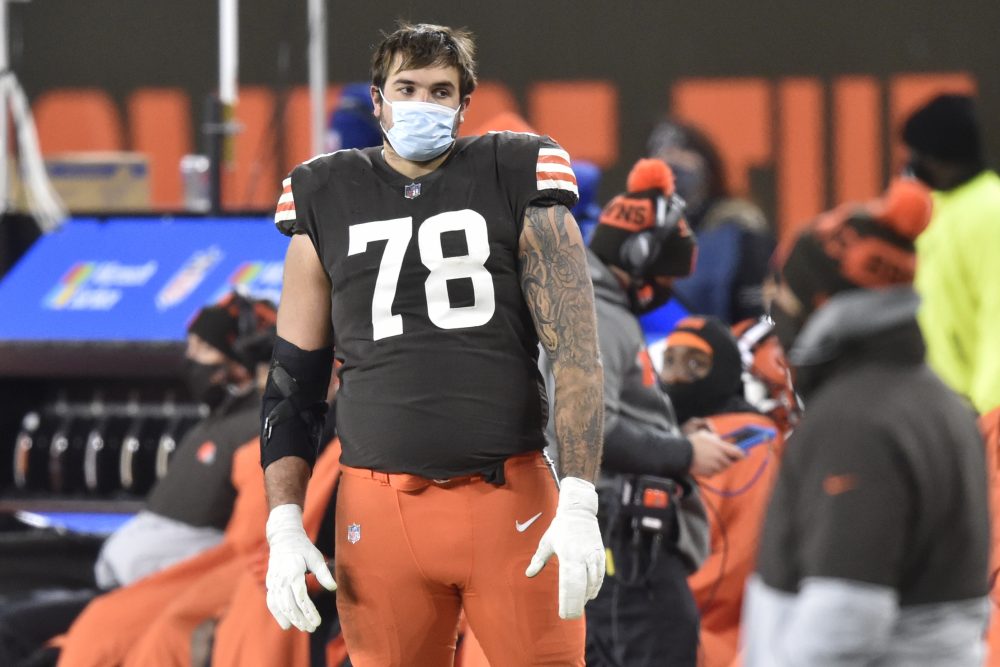 Right tackle Jack Conklin and cornerback Terrance Mitchell are active and expected to start tonight against the Steelers after being listed as questionable Friday.

That’s a huge relief for the Browns, who were already short-handed after a series of positive COVID-19 tests.

Conklin, named a first-team All-Pro on Friday for the second time in his career, didn’t practice Friday with an illness after reporting symptoms. But he continued to test negative and was cleared to play in the team’s first playoff game since 2002. He’ll match up against Steelers outside linebacker T.J. Watt, who led the league with 15 sacks.

The availability of Mitchell, the No. 2 cornerback, is critical with No. 1 corner Denzel Ward on the COVID-19 reserve list after testing positive last week. Mitchell registered what was believed to be a false positive Friday and was listed on the official injury report as not injury related. The result was confirmed as a false positive and he was cleared to play.

He and Conklin drove separately to Pittsburgh as a precaution while the rest of the players flew. The coaching staff also drove after coach Kevin Stefanski and three assistant coaches tested positive during the week.

The team announced Robert Jackson is expected to start for Ward for the second straight week and Michael Dunn is expected to make his first NFL start in place of left guard Joel Bitonio, who tested positive.

All the players listed as questionable, including rookie receiver/returner Donovan Peoples-Jones (concussion) are active.

Defensive end Myles Garrett was named the game captain for the second straight week by Stefanski. The choice worked in the 24-22 win over the Steelers in the regular-season finale, and Garrett was named first-team All-Pro and a Pro Bowl starter.

The Browns’ virus tests all came back negative Sunday, the final hurdle for the wild card game at Heinz Field to go on as scheduled.

The negative tests were good news for a Browns organization that couldn’t get into its facility or practice until Friday after a string of positives over a couple of weeks.

Special teams coordinator Mike Priefer will be the acting coach, and offensive coordinator Alex Van Pelt will call plays in place of Stefanski.

The key absences cross over to the roster. Ward, Bitonio, nickelback Kevin Johnson and receiver KhaDarel Hodge are out.

Quarterback Baker Mayfield provided pregame motivation for his teammates about 4½ hours before kickoff.

Not only did he post a hype video on Instagram, he captioned it “Browns is the Browns,” a clear reference to midweek comments by Steelers receiver JuJu Smith-Schuster. Many of Mayfield’s teammates commented.

“You got me hyped..” linebacker Mack Wilson wrote.

“I think they’re still the same Browns teams I play every year,” he told reporters. “I think they’re nameless gray faces. They have a couple good players on their team, but at the end of the day, I don’t know. The Browns is the Browns. It’s one of those things, AFC North football. They’re a good team. I’m just happy we’re playing them again.”

Garrett was asked Friday if the Browns had already proved they’re not the same old Browns.

“We will have to prove it when we see them on Sunday,” he said.

BLASTS FROM THE PAST

“Thanks for this season and know that old guys like me are pulling for you.”

“Let’s overcome all the adversity and every challenge in your way.”

“This is finally the dominant franchise that it used to be for so long,” Thomas said. “We’re back, baby. We’re not stopping till we win the Super Bowl. Let’s go!”

Quarterback Bernie Kosar and running Kevin Mack also chimed in, but receiver Webster Slaughter stole the show among the players from the great teams of the 1980s.

“We’re extremely proud of the performance you guys have put together this year,” said Slaughter, who’s in a Mayfield jersey. “Baker, I’ve been sitting here dressed like this since Monday. That’s how excited we are about this game. Let’s go! Let’s go!”

He screamed the final part.

Webster Slaughter getting us so hype with his message to the team: pic.twitter.com/zgHLV9er6P

Stefanski planned to watch the game from the basement of his suburban West Side house. He tested positive for COVID-19 on Tuesday, quarantined and worked from home all week.

He was allowed to communicate with people in the locker room until they took the field for kickoff.

“I think the players and I know the coaches understand this, we have established who we are over the course of the season so the guys know that,” he said Friday. “They do not need me to remind them about any of that at this point.

“I can’t stress enough how much I trust the coaches we have and the players to do their jobs.”

Pro Football Focus graded the Browns offensive line as the best in the NFL.

Wyatt Teller led right guards with a 92.9 grade after posting a 56.7 last year. His strength was run blocking. Conklin was the highest-graded right tackle (84.3), allowing a pressure rate of only 2.9 percent.

** Mayfield finished the regular season 15th in the league with a 95.9 passer rating.

** Nick Chubb ranked seventh with 1,067 yards rushing, tied for fourth with 12 rushing touchdowns and fourth with 5.6 yards per carry. He missed four games with a knee injury.

** Garrett was sixth with 12 sacks despite missing two games with COVID-19.