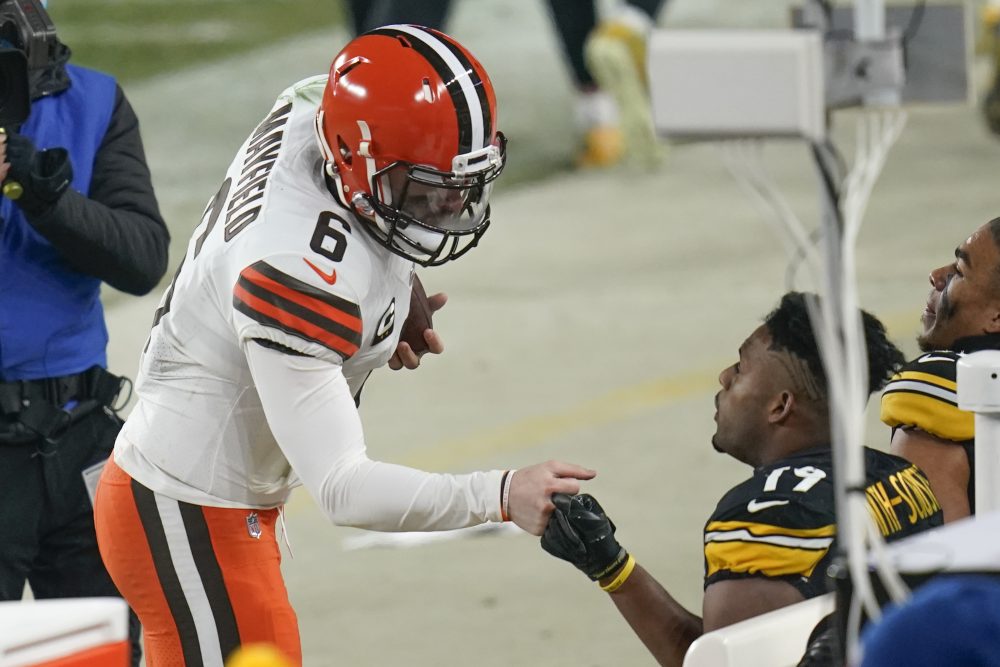 These aren’t the same old Browns and haven’t been since Week 2, when they rebounded from a 38-6 opening loss to start a four-game winning streak.

In case Smith-Schuster, the outspoken, misguided Steelers receiver, or anyone else still needs convincing, let me count the ways in which the Browns have changed.

** Coach Kevin Stefanski knows how to attack an opponent. He has a wonderful sense for what’s needed to win in a given week and maximizes his team’s chances to do it.

** He sets a measured tone for the team while getting complete buy-in from the players.

** Quarterback Baker Mayfield has evolved into a big-game winner. His composure and ability to execute the game plan were impressive against an intimidating Steelers defense, and he’s on a streak of 19 touchdown passes to one interception.

** The offensive line is arguably the best in the league when healthy. And it holds its own when not, which was on full display Sunday night with Pro Bowl left guard Joel Bitonio (COVID-19) and All-Pro right tackle Jack Conklin (hamstring) out.

** Nick Chubb is perhaps the NFL’s best running back. That he’s the team’s hardest worker is even more impressive.

** Kareem Hunt is the best backup running back in the league and might run harder than Chubb. That’s saying something.

** Receiver Jarvis Landry revved up the culture change with his “contagious” speech captured on “Hard Knocks.” Landry wasn’t going to be content with losing or less than maximum effort and that eventually spread throughout the team.

** The depth of talent compiled by first-year general manager Andrew Berry combined with strong coaching allows players at the bottom of the roster to make significant contributions. This was demonstrated time and again Sunday night, as backups M.J. Stewart Jr., Sheldrick Redwine and Porter Gustin had interceptions and Michael Dunn played great at left guard. That’s only a few of the examples.

** A resilience uncommon among NFL teams and unprecedented in the expansion era of the Browns. Coupled with smart, disciplined play, it’s a special mix.

** Personalities too strong to let the losing persist. Stefanski, Mayfield, Garrett, Landry and so many more aren’t burdened by the heartbreak and dysfunction of the past. They changed the Browns to where they are no longer recognizable.

Smith-Schuster must be able to see that now.

Commentary: Unlikely and inspirational win just might be Cleveland’s greatest ever
Commentary: Upsets can happen — even for the Browns