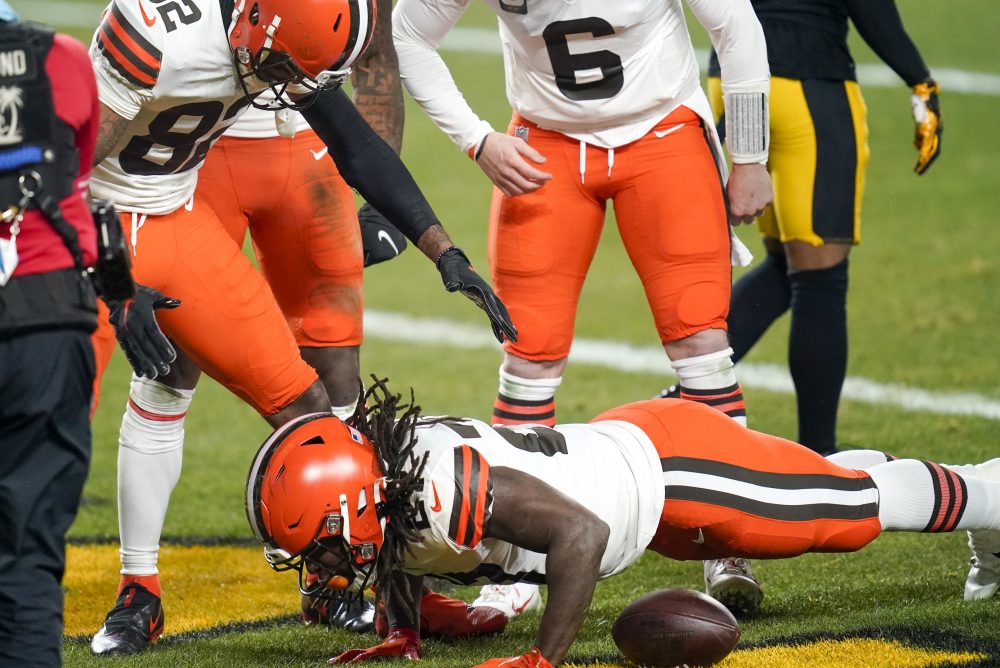 Given everything, and EVERYTHING doesn’t come close to covering it all, it’s arguably the greatest win ever by a Cleveland sports team.

That’s a big statement, but this is a big moment.

And especially a Kevin Stefanski moment.

At one point you had to wonder if the Browns could win the game before they ran out of players. There were so many new ones, they were introducing themselves to each other as they were taking the field.

hey had no head coach. They were missing four assistant coaches and four players. They lost — what was it? — two, three or four more players during the game? I lost track. In the fourth quarter I’m pretty sure I saw their bus driver line up at cornerback.

But the Browns, who had absolutely no business beating the Steelers, beat the Steelers 48-37 in an AFC wild card playoff game.

There were Browns players on the field that nobody knew, or even heard of, who contributed to the greatest win ever by a Cleveland sports team.

They won it while their head coach was sitting at home, in his basement, watching the game on TV like any ordinary fan.

But Stefanski is an extraordinary coach, and it was proved again Sunday night, when the Browns won a game, an important game, a historic game, that they had absolutely no business winning.

They won it because of the culture Stefanski and his coaches instilled in the team at the beginning of this pandemic-ravaged season. Stefanski, under COVID-19 house arrest, sent his team to a foreign city to play their archrival, in a nearly empty stadium, in a win-or-go home game — that they played without him, and won without him. He was there in spirit, however, and that spirit ambushed the Steelers in a first-quarter turnover-fest by the end of which the Browns led 28-0.

In the first half the Browns defense and the Steelers offense took turns stopping the Steelers. The Steelers stopped themselves. The Browns kicked off and 14 seconds later they were winning 7-0.

In the second half, the Steelers offense was almost unstoppable, but the Browns made just enough plays at all the right times to stay ahead of that giant black and gold boulder that was thundering down the hill toward them.

It got a little hairy late, but hairy never caught the Browns. Neither did the Steelers. Grossly undermanned, alarmingly coach-depleted, the Browns authored perhaps the most improbable victory in franchise history, if not NFL history.

The stats scream that this had to be a Steelers victory, probably a blowout.

But the Browns’ competitive spirit, the Browns’ spectacular skill position players on offense and the culture hammered into the roster by the rookie head coach paid off big-time, on national TV.

It was a feel-good rags-to-riches victory in a rags-to-riches season. Not only were the Browns missing their head coach and some key assistants, they weren’t even able to practice for most of the week.

In order to avoid any more positive COVID-19 tests, they split up and made the trip from Cleveland to Pittsburgh in planes, trains and automobiles. For all we know, a couple of them may have paddled down one of the three rivers, left their canoes on the bank, went into the stadium and beat the Steelers, ending the season of a Pittsburgh team that at one point was 11-0.

The Browns, with a COVID-19-impacted Swiss cheese roster and without their full complement of coaches, with almost no practices between games, beat the Steelers twice in eight days, and dropped 72 points on them in the process.

Surely the Browns are now America’s Team. Who wouldn’t fall for this bunch? What other team in any sport overcame more in the last week — or more in the last 18 years, for that matter 00 than the one that, in the fourth quarter of Sunday’s game, had an injury-ravaged offensive line that included two used car salesmen and an accountant.

OK, so that’s an exaggeration. But not by much.

If it’s not the greatest win ever by a Cleveland sports team, it’s the most satisfying. The most impressive. The most uplifting, at a time when all of our ups could use some lifting.

This was more than a playoff win. This was a testament to the human spirit, and the will to compete.

This Browns win, and this Browns team will forever be remembered for that.

Browns-Steelers Matchups: Who’s got the edge?
Commentary: From coach to QB to resilience to results, these certainly aren’t the same old Browns