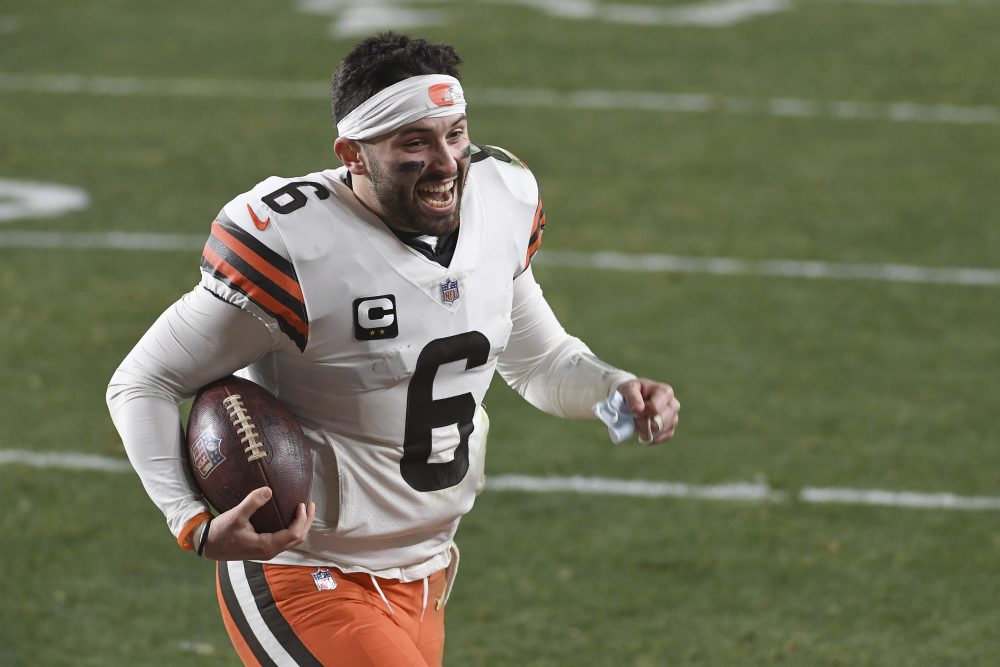 In an honest moment at the start of training camp, Baker Mayfield admitted doubting himself during the personal and team struggles of 2019.

“I would say I lost myself by not having that success,” he said in August.

With a new coach in Kevin Stefanski, a new system that caters to his strengths and a season of triumphs throughout a trying 2020, Mayfield is as confident as ever. The self-belief that made him a Heisman Trophy and No. 1 overall draft pick is contagious and powered the Browns to a 48-37 upset of the Steelers on Sunday night in Pittsburgh.

The Browns are in the second round of the playoffs for the first time since the 1994 season — and they’re not surprised, even if everyone else is.

“We believe in the people in this room no matter what’s going on,” Mayfield said after the game. “As soon as the COVID news came out that we were missing some key guys, obviously starting with our head coach, we knew that everybody was counting us out. We knew what mentality we were going to have, and it is just to cut it loose, go out there and give it everything we have. There was no added pressure or no extra anything. It was just for us to go out and do our job because no one believed in us, besides us.”

The Browns could barely celebrate ending a 17-season playoff drought because Stefanski, Pro Bowl left guard Joel Bitonio and three others were added to the COVID-19 list Tuesday. The team couldn’t practice until Friday, didn’t get No. 1 cornerback Denzel Ward back in time for the game and was counted out by many.

Mayfield wouldn’t have it any other way. And he expects the same thing Sunday in Kansas City against the defending Super Bowl champion Chiefs, who opened as much as a 10-point favorite.

“Sounds pretty normal to me,” he said.

“One of the best things about Baker is he is so very much himself at all moments,” Stefanski said Monday. “He is an authentic person and I think that rubs off on his team. The way he leads by example, the way he leads vocally, the guys respond to him.

“And you’re right, he has been counted out a bunch in his life.”

Mayfield was staked to an early lead by Karl Joseph’s fumble recovery in the end zone after a high Steelers snap on the first play. The takeaways kept coming via four Ben Roethlisberger interceptions, and Mayfield kept making the Steelers pay.

Against a defense that led the league with 56 sacks — and with an offensive line missing Bitonio and All-Pro right tackle Jack Conklin, who left in the second quarter with a hamstring injury — Mayfield showed the composure and precision of a playoff veteran, not the rookie he was. He went 21-for-34 for 263 yards, three touchdowns, no turnovers and a 115.2 passer rating. He wasn’t sacked.

“That is what I kept telling myself all week is if I do my job, don’t put any added pressure, take care of the ball, do the things that we have been talking about the whole all year and put us in position to have success, the rest would take care of itself,” he said.

“That guy has an amazing amount of self-confidence in a good way and I know he has some swagger to him, but I love the way he handles adversity,” said acting coach Mike Priefer, a native Clevelander who choked up talking about what the win meant to the fans. “The way he responded when Pittsburgh was coming back in the second half, it was extremely impressive.”

Center JC Tretter said the swagger is part of the authenticity.

The team’s resilience in a season of adversity has been evident since they won four straight following a 38-6 loss in Baltimore to open the Stefanski era. The traumas and tribulations of last week felt like more of the same.

Outside doubts seem to make Mayfield’s inner belief grow. And his teammates follow his lead.

“The best thing about it was the mentality of everybody saying, ‘Hey, we did not just want to just win this game,’” he said of the celebration in the locker room. “Like I said last week, it is just the steppingstone to where we eventually want to go. For a lot of guys, it was a huge win — my first playoff win, for starters — but nobody here is satisfied yet.”

Mayfield talked about changing the culture of the organization even before the Browns drafted him with the first pick in 2018. Mayfield’s new focus is raising the bar of expectations for a team and city used to pain and suffering.

Before heading to the locker room, Mayfield ran toward defensive end Myles Garrett and the back-to-back No. 1 picks celebrated with a midair shoulder bump.

“A great feeling. Surreal,” Mayfield said. “I told people we were all brought in here for a reason and you are starting to see that. That is why I continue to talk about the new standard and turning this thing into a winning culture.”

Garrett said it’s easy to believe in this team after witnessing the talent and desire up close.

“It is a real pleasure to play on the same team as him. He has been rolling. He has really caught his stride. I can’t wait to see what he can do at this time next week.”

The Chiefs may want to hold back on the bulletin-board material. Mayfield fuels himself on slights.

He turned his hat backward for the Zoom interview in recognition of a long-running feud with radio host Colin Cowherd, and may never let Steelers receiver JuJu Smith-Schuster live down his comments last week.

“I think they’re still the same Browns teams I play every year,” he told reporters. “They have a couple good players on their team, but at the end of the day, I don’t know. The Browns is the Browns.”

Mayfield quoted Smith-Schuster in a pregame Instagram post, approached him on the Steelers bench after the game, then yelled “Browns is the Browns” as he ran into the locker room.