Defense gets off to blazing start, sets table for upset playoff victory with barrage of takeaways 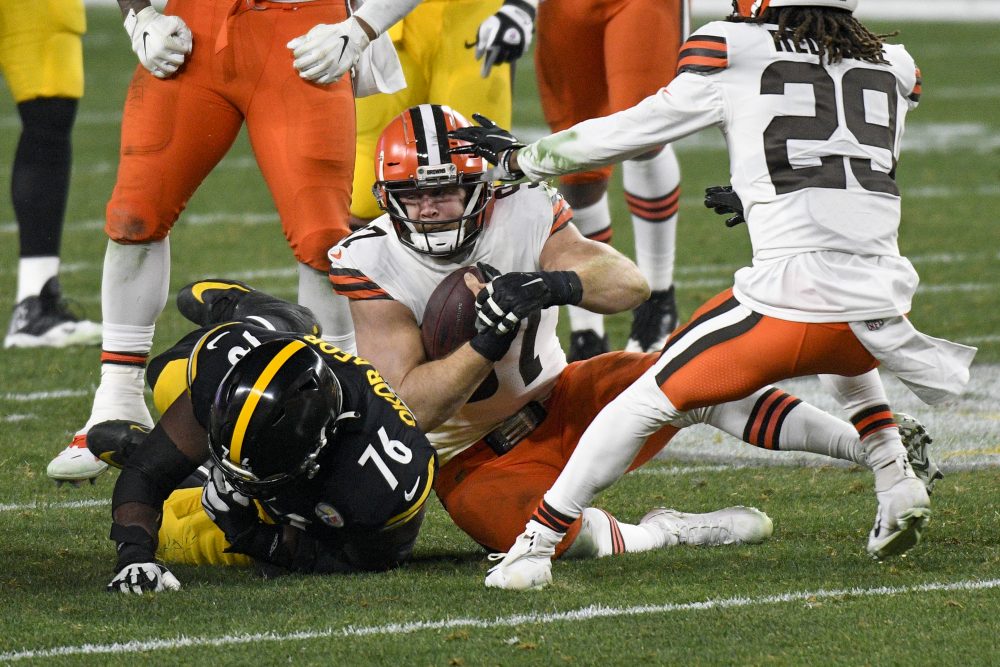 The Browns defense couldn’t have imagined a better start.

Safety Karl Joseph pounced on a high snap that rolled into the end zone for a touchdown on the opening play. The defense forced five turnovers, four in the first half, and helped Cleveland get its first playoff win in 26 years, eliminating Pittsburgh 48-37.

“To defer till the second half and then to get seven points on the board without having to step foot on the field is great,” quarterback Baker Mayfield said. “It kick-starts it, and then everybody on the sideline was like, let’s just keep this lead, let’s keep it going, let’s just go out and do our job. Being up 28-0 in the first quarter is obviously an incredible start.”

The week leading up to Sunday’s game was anything but normal. COVID-19 cost the Browns a number of key players and coaches, including coach Kevin Stefanski, who did not travel with the team. Special teams coordinator Mike Priefer was acting coach for the wild card game.

Cornerbacks Denzel Ward and Kevin Johnson were unavailable because of COVID-19 and defensive end Olivier Vernon ruptured his Achilles in the team’s Week 17 win over Pittsburgh.

But it was hard to tell the Browns defense was missing key contributors Sunday.

“There was not a chance we were going to walk out there and just lay down,” defensive end Myles Garrett said. “So we were able to pounce on them early and hold onto the lead. We got a lot of takeaways on defense and that’s really been the story of our season.”

Pittsburgh’s second drive ended just like the first — with a turnover. Ben Roethlisberger was pressured off play-action and made a rushed throw over the middle. Nickelback M.J. Stewart Jr. made a great one-handed grab and returned the pick to the Steelers 46-yard line.

The Browns scored on a 40-yard pass from Mayfield to Jarvis Landry three plays later.

Defensive tackle Larry Ogunjobi and safety Ronnie Harrison stuffed fullback Derek Watt on a third-and-inches, forcing Pittsburgh to punt on its third drive. The Browns promptly extended their lead to 21-0.

The defense got three more interceptions, the next coming on Pittsburgh’s ensuing drive and allowing Cleveland to become the first team to score 28 points in the first quarter of a postseason game. Roethlisberger was looking for receiver Diontae Johnson over the middle, but delivered a high throw that Johnson tipped in attempting to go up for the catch. Safety Sheldrick Redwine came up with the interception, setting Cleveland up at the Steelers 15-yard line. The Browns scored three plays later.

The Steelers settled in on offense and mounted a second-half rally, but linebacker Sione Takitaki sealed the game with 3:16 by grabbing Roethlisberger’s fourth interception. The pick set up Cleveland in field goal range, allowed it to drain more clock, forced the Steelers to use two timeouts and pushed its lead to three scores.

“It was huge,” Priefer said of Takitaki’s interception. “They had some momentum going. Like our defense has done all year long, they’ve created turnovers in crucial moments and that’s exactly what that was. And I was proud of Tak. The ball was pretty high and he had good ups on that play and mad a nice play for us.”