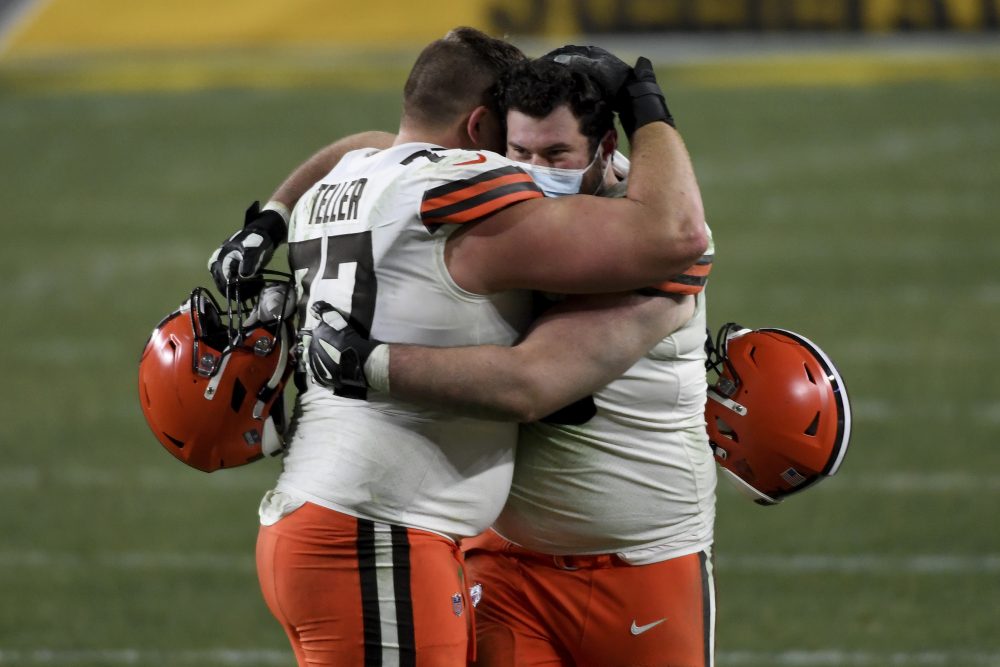 Of all the impressive feats Sunday night in the 48-37 wild card win over the Steelers, the protection of Mayfield belongs right behind the five takeaways by the defense. The Steelers led the league with 56 sacks this season and have at least one in an NFL-record 73 straight regular-season games.

They sacked Mayfield four times each in the two regular-season meetings.

Kendall Lamm took over for Conklin and helped contain outside linebacker T.J. Watt, who’s the favorite to be Defensive Player of the Year after leading the league with 15 sacks. Blake Hance played the final 14 of 67 offensive snaps when Dunn exited, and the pair handled the difficult Steelers interior of Cam Heyward, Stephon Tuitt and Tyson Alualu.

“I think the play calling, I think the play execution, I think Baker understanding where to go with the ball and getting the ball out quickly and on time,” coach Kevin Stefanski said. “It is an all-encompassing thing when you go into playing a team like that and give up zero sacks. It is always going to be a bunch of reasons, but I just thought the guys were on point with really their assignments.”

Lamm has 27 career starts, so his performance wasn’t shocking. Dunn, on the other hand, had played one NFL snap on offense before starting against the Steelers, and Hance made his NFL debut after being signed off the Jets practice squad Jan. 2.

“I will single out Michael Dunn, I thought he was outstanding,” Stefanski said. “Really, really great in his technique, in his effort, in his assignment. He did a great job, among others.”

“Mike has been with us for the year now and I cannot be more proud of a guy to step into that environment and just play as well as he did,” Tretter said. “Just great overall by everybody stepping in in that type of environment to play that well.”

SEE YA NEXT YEAR

Rookie Chase Claypool went on social media Monday, less than 24 hours after being eliminated from the playoffs.

“Bad loss, but the Browns are going to get clapped next week,” he said, referring to the matchup with the Chiefs. “So it’s all good.”

“They’re still the same Browns teams I play every year,” he said. “The Browns is the Browns.”

Browns players, including Mayfield, made note of the insult, then Mayfield and running back Kareem Hunt were among those who brought it up after the game.

“Any talk like that is going to be disrespectful to anybody on any team,” defensive end Myles Garrett said. “We definitely did not appreciate it. I think we made that known tonight with our performance.”

“I don’t regret what I said,” Smith-Schuster said after the game. “They came out and they played a helluva game.”

The flight home from Pittsburgh landed at about 3 a.m., and the players were greeted by a group of fans at the airport.

“It was definitely cool,” defensive tackle Larry Ogunjobi said. “They were out there chanting, and I am like it is 3 a.m. in the morning and it is cold. That just goes to show the love that the fans in Cleveland have and the dedication to the team they have — the best fans in the world.

The offense didn’t seem to miss a beat with coordinator Alex Van Pelt filling in for Stefanski as play caller. Van Pelt hadn’t called plays since 2009 with the Bills, but the offense scored five touchdowns.

“Alex was absolutely outstanding,” Stefanski said. “I am so thrilled for him in Pittsburgh, which that means a little bit extra to him being the Pitt Panther legend that he is. He just was dialing them up. Great call after a great call and the guys were executing. Not surprised but really proud of him.”

NFL Network reported middle linebacker B.J. Goodson suffered a bad shoulder sprain and bruised ribs but returned to the game and plans to play against the Chiefs. Stefanski didn’t mention him in his injury rundown.

** He didn’t provide an update on the players still on the COVID-19 reserve list: cornerbacks Denzel Ward and Kevin Johnson, receiver KhaDarel Hodge and Bitonio.

After naming a captain for each of the regular-season games, Stefanski made Mayfield, Garrett and long snapper Charley Hughlett the postseason captains. They had the “C” on their chest.

** Tretter would’ve preferred to practice on Wednesday and Thursday last week but said the cancellations had a benefit.

“You look at things glass half-full, last week almost gave us an unscheduled mini-bye where guys were able to get their body back after a long season,” he said. “I know I felt coming back on Friday for practice that was probably the best I have felt in a long time this late in the season.”

** Ogunjobi drove back center Maurkice Pouncey on a third-and-1 stop as the Browns jumped to a 28-0 lead.

“I just wanted to get off the rock and try to find a way to make a play for the team and get us off the field,” he said.