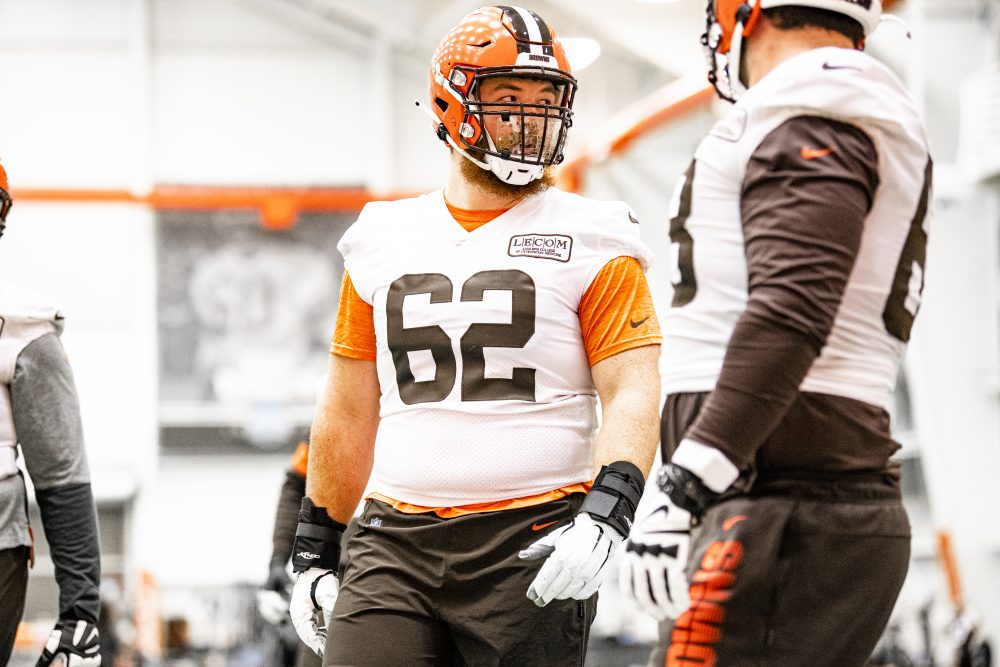 Blake Hance tweeted Monday for only the fourth time since the NFL season started.

“#NewProfilePic,” he tweeted with a photo of him in a No. 62 Browns jersey. “AGuyNamedBlake”

Hance was unknown to even the most diehard fans before he was forced into action at left guard in the fourth quarter Sunday night as the Browns finished off the 48-37 victory over the Steelers, the franchise’s first playoff win in 26 years. Baker Mayfield made sure everyone knew Hance’s name during an on-field interview with NBC’s Michele Tafoya.

“A guy named Blake — that I introduced myself to literally before the game — stepped up in the fourth quarter,” Mayfield said while discussing the contributions from reserves.

“It was a true story,” Hance told The Chronicle-Telegram on Tuesday in a phone interview. “Just walked past each other in the locker room and was kinda like, ‘Oh, by the way, nice to meet you.’”

Was there more to the conversation?

“No, that’s pretty much it,” Hance said. “We were both getting ready in our own way for the game. Just a quick hello. ‘By the way, nice to meet you.’”

Mayfield and Hance (6-foot-5, 310 pounds) will probably spend more time together in the coming days, at least early in the practice week.

Michael Dunn, who started Sunday night in place of Pro Bowl left guard Joel Bitonio, was placed on injured reserve Tuesday with the calf strain that knocked him out Sunday. Bitonio remains on the COVID-19 reserve list after testing positive Jan. 5 and isn’t expected back until Thursday, at the earliest.

With top backup Chris Hubbard done for the season following knee surgery last month and rookie fifth-round pick Nick Harris on IR with a knee injury, Hance is likely to open the week as the first-team left guard. Veteran tackle Kendall Lamm is another option but he could be at right tackle after All-Pro Jack Conklin left the game Sunday in the second quarter with a hamstring injury. Coach Kevin Stefanski referred to him as day-to-day.

Hance, who turned 25 Monday, played the final 14 snaps against the Steelers. They were the first of his NFL career after he was undrafted in 2019 out of Northwestern and made the transition from left tackle to interior lineman.

Hance said he has a lot to improve on, especially in the run game, but he impressed his new teammates.

“Blake, comes in and you give a lot of credit to him working hard this week, getting up on all of his calls, getting up on the plays and the coaches taking extra time after meetings to work with him and make sure he is ready to play, and steps in there and plays well, too,” center JC Tretter said Monday.

Hance was “bummed” for Dunn that he got hurt in his first NFL start after playing so well but didn’t have time to think about the magnitude of the situation when he was pressed into service.

“Immediately got called over by JC Tretter and just pretty much told me if I had any questions at all, just ask, he doesn’t care what they are,” Hance said. “So he was real helpful, made that easy, too.

Hance’s self-described “whirlwind” began Jan. 2 when the Browns signed him to the active roster off the Jets practice squad. The COVID-19 issues had started for the Browns, along with injuries along the line, so general manager Andrew Berry went looking for a depth acquisition who could drive to town and quickly be available given the league’s COVID protocols. Hance had a tryout with the Browns at the start of the season and spent time with veteran line coach Bill Callahan last season in Washington, so he made sense.

“Thought I was 24 hours from the season being over and getting into the offseason,” Hance said of being with the Jets. “Obviously having the season extended has been great. And getting a chance to come onto a team in the playoffs and then get a big win in the first round and moving on, it’s exciting. It all happened fast but just trying to stay focused on the next opponent.”

That’s the Super Bowl champion Chiefs on Sunday in Kansas City, Mo. The Browns hope Bitonio is back, but Hance knows he’ll have to be ready again just in case.

“Whether you’re on practice squad or the last reserve or whatever, you have to prepare like you’re going to play, because as we’ve seen all year, things change quickly and you might play,” he said. “Preparing like the starter is really the only way to do it.”

Hance’s time in town has been spent nearly all in his hotel. He lifted weights a couple of times in the hotel weight room last week when two practices were canceled and worked on footwork in his room.

“It was wild,” he said. “But the mental part was definitely the biggest part.”

Hance, who grew up in central Illinois, was All-Academic Big Ten at Northwestern multiple times, earning his bachelor’s in economics and completing a one-year master’s program in management studies at the Kellogg School of Management.

Hance originally signed with the Bills after going undrafted, then spent time with Washington and on the Jaguars practice squad last year. He stayed with Jacksonville until he was cut after training camp this year and wound up with the Jets.

“That’s what I’m hoping,” he said. “I’ve already moved around a lot in two years, so it definitely seems like a great place to be. Very passionate fans and the team obviously is doing really well and hoping to keep going.”

Hance said outside of the linemen and Mayfield, he hasn’t met too many teammates or coaches. That includes Stefanski, who missed the playoff game with COVID-19.

“I am looking forward to it,” Stefanski said.