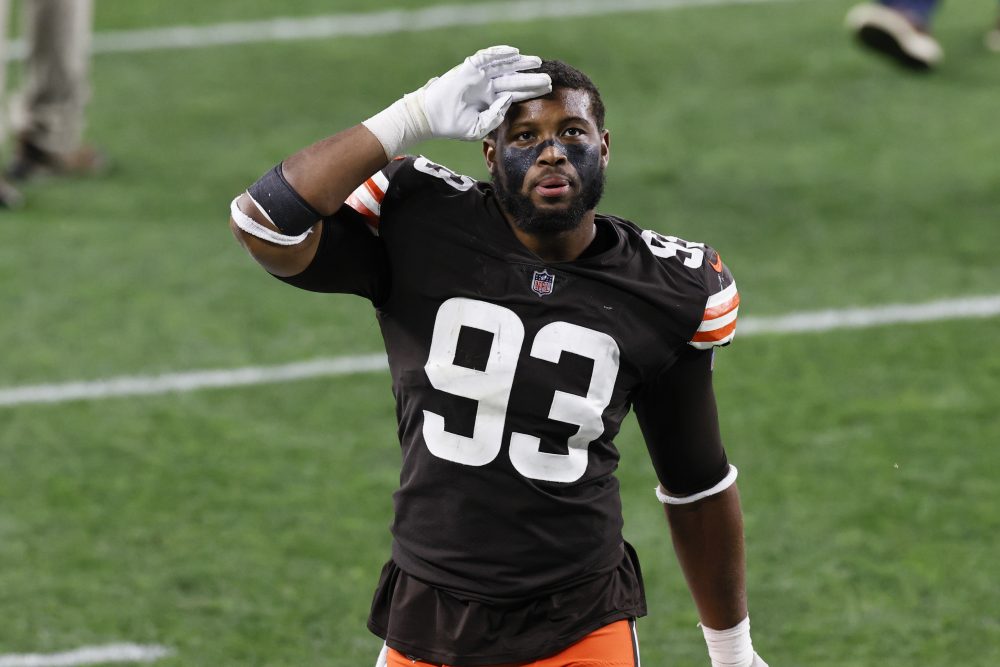 Not only did he have the checklist of symptoms associated with the disease, he was worried about his five teammates who were identified as high-risk close contacts Dec. 26, the day before a loss to the Jets. Receivers Jarvis Landry, Rashard Higgins, Donovan Peoples-Jones and KhaDarel Hodge and linebacker Jacob Phillips spent too much time with Goodson in the recovery area of the team facility, didn’t follow proper protocols and were placed on the COVID-19 reserve list.

“To be 100 percent honest with you, I was more so concerned about that because those guys have families,” Goodson said Wednesday. “I have a daughter myself so that was the first thing that came to my mind. ‘Are these guys OK? Are their families OK?’

“Just got to thinking about who was I around and things of that nature. They did a great job with the (contact) tracing and all of that stuff.”

The receivers and Phillips never tested positive and returned after missing one game. Goodson missed two but returned last week and played in the wild card win over the Steelers.

“It hit really hard — really, really hard,” he said. “During my downtime, I really just felt bad for those who are older who experienced what I went through. It is a tough thing, and I am just thankful for the staff and all that they did for me during my time in need.”

Goodson quickly became a team leader in his first season with the Browns and was disappointed he was at the heart of six players being ruled out at the last minute for the loss to the Jets that could’ve cost the Browns a playoff spot.

“Everything just happened so fast,” he said. “It was just a pretty crazy moment and kind of an unbelievable moment, especially for a guy like myself who tries to do everything the right way. Unfortunately I was in a situation where I put other teammates at risk so they had to suffer the consequences of our actions, so to speak, which is tough.

“You just never know. It is a very serious deal.”

Goodson said all he does is go to work and stay home. Cornerback Denzel Ward was also stunned when he caught the virus.

“I was very surprised,” said Ward, who experienced rough symptoms. “I wear a mask often. You just can’t take your guard down at any second. You never know when it is around.”

If Baker Mayfield is offended by Chiefs receiver Sammy Watkins’ seemingly dismissive tweet about the Browns, he’s not saying.

“I have no problem with it to be honest with you,’’ Mayfield said. “Because if you don’t have confidence you’re not going to have success. And those guys have been doing it together for a few years now.

“They have a ton of confidence in each other and so people get mad when you put it out there, you put it up for bulletin-board material, but I don’t have a problem with it. It comes with the nature of this game that you’ve got to be confident and you’ve got to know and believe in yourself.”

The Browns play the top-seeded and defending champion Chiefs on Sunday in Kansas City, Mo.

Watkins tweeted while watching the Browns’ 48-37 wild card win over the Steelers.

“This is a video game wth is going on this is weird I’m speechless pretty sure the whole world is shocked bc I never seen anything like this in my life not in the NFL.!” he tweeted.

Someone replied: “Looks like we got some comp next week”

That’s when Watkins may have gotten the attention of the Browns.

Mayfield has been known to use slights, real or perceived, to fuel him. He had a strong reaction to Steelers receiver JuJu Smith-Schuster telling reporters “the Browns is the Browns” last week and yelled the phrase as he entered the locker room after the win.

This is a video game wth is going on this is weird I’m speechless pretty sure the whole world is shocked bc I never seen anything like this in my life not in the NFL.! 😳😳😳

“For sure, definitely looking forward to playing,” he said.

He injured the shoulder Sunday.

“The ground is undefeated,” he said when asked how he got hurt.

Coach Andy Reid ruled out right tackle Mitchell Schwartz, who’s on injured reserve with a back injury and missed the last 10 games. He was a second-round pick by the Browns in 2012.

“Backs are fickle, man, and so he’s not going to be back this week,” Reid told Chiefs reporters. “There’s nobody — nobody — that wants to play more than this guy. You know how he’s wired.”

Offensive line coach Bill Callahan returned to practice after missing two games with COVID-19. He’s been instrumental in the success of the third-ranked rushing attack as well as Mayfield being sacked only 26 times, eighth in the league.

“Coach Callahan has done a great job for us all season and continued to do a great job, whether in the building or out,” Stefanski said. “It is a big deal for our offense and for our offensive line to get him back out there.”

** Left guard Joel Bitonio and Hodge were the only players still on the COVID-19 reserve list after cornerbacks Ward and Kevin Johnson were activated Wednesday. Bitonio and Hodge are eligible to return Thursday but must be cleared.

Stefanski was in high school and college in Philadelphia when Reid was establishing himself as one of the league’s best coaches with the Eagles. Reid won his first Super Bowl with the Chiefs last year and remains a role model for play callers around the league, including Stefanski.

“He is somebody that I obviously admire a ton, just watching how he has done it over the course of time in varying ways, how he has structured his offense to the strengths of his team and then he is a great play caller,” Stefanski said. “I love to watch the great play callers and how they mix it up and how they call different things and situationally, as well, with Coach Reid.”

Reid knew of Stefanski as a high school player and saw him play at the University of Pennsylvania.

“He has done a great job,” Reid said on a conference call. “It is great to see him have success. He is a good guy, too. You know that. He is a good person and works hard.”