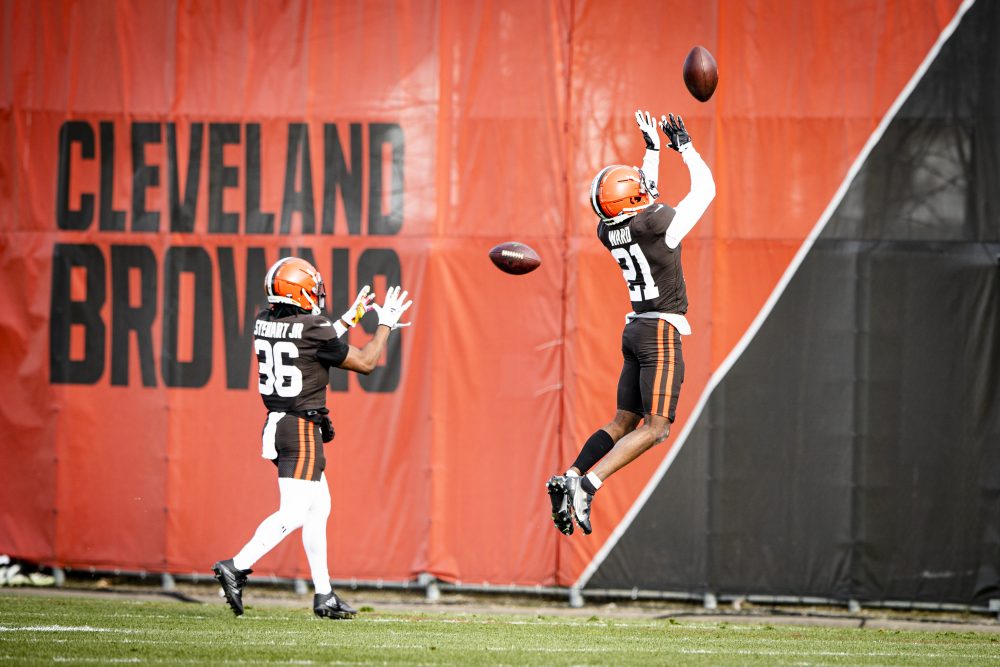 Denzel Ward is back.

The Browns’ No. 1 cornerback was activated from the COVID-19 reserve list Wednesday morning, along with nickelback Kevin Johnson. They missed the last two games.

“It is really, really huge to have all hands on deck going into this contest,” linebacker B.J. Goodson said. “Looking forward to seeing my dawgs back out there doing what they do.”

The Browns also got back offensive line coach Bill Callahan after he missed two games with COVID-19. He’s been a big part of the improvement in the pass protection and run game this year.

Coach Kevin Stefanski still expects to return to practice Thursday. He tested positive Jan. 5 and missed the 48-37 wild card win over the Steelers on Sunday.

The Browns can use all the healthy defensive backs they can get, especially two of their top three corners in Ward and Johnson, before the matchup with quarterback Patrick Mahomes and the high-powered Chiefs.

“He is obviously an exceptional talent,” Ward said. “He has the arm strength. He can make every throw on the field. He is smart. He is everything you want in a quarterback.”

The Browns beat the Steelers twice without Ward and Johnson but allowed 810 passing yards. Robert Jackson, who started in place of Ward, was placed on injured reserve Tuesday, along with practice squad cornerback A.J. Green. They both have hamstring injuries.

Ward and Johnson hadn’t been on the field in more than a week, so Stefanski said the team would monitor them during the practice week. They weren’t listed on the injury report, indicating they practiced fully, and Ward said the pair would be back up to speed by Sunday.

“I have been doing extra conditioning and working out, just trying to take the necessary steps to get my wind back and conditioning back,” Ward said. “I think I will be ready. I will be all right.

“I talked to Kevin today about it and how he is feeling and everything. He is saying he is over it and he is ready.”

The return is a relief for the Browns and Ward, who was knocked off his feet by the disease and lost the sense of taste and smell.

“I was pretty sick,” he said. “Just flulike symptoms, all of the body aches and chills and stuff like that. I was pretty laid out in my house.

“It was not great. I am glad I got over it and hoping everybody still continues to stay safe and wears a mask and tries to beat it.”

Ward, who made the Pro Bowl as a rookie in 2018, was playing at an all-star level before missing three games late in the year with a calf strain. He returned for two before missing the last two with COVID, finishing the regular season tied for second in the NFL with 18 passes defensed in 12 games and adding two interceptions, a forced fumble, a quarterback hit that led to a pick-six and 46 tackles.

“Denzel’s very, very competitive,” Stefanski said. “I’ve been very impressed to watch him work, going all the way back to training camp when I finally got to meet him in person and just watch how he works. And little injury, little nicks and bruises, he pushed through all of those and kept practicing and kept competing at a high level. I think you’ve seen in the games where he’s made impactful plays when he’s out there. So that’s something that is very impressive to me.”

M.J. Stewart Jr. filled in admirably for Johnson in the slot, grabbing an interception in the finale and another in the playoff game. The coaches could split time or play them both, but the return of Ward and Johnson is definitely a major boost.

“I think highly of Kevin and I,” Ward said. “I feel that we are players who can step in and make plays to help this team out. Regardless of if we were in there or not – obviously we have seen it — this team could get the job done and step up to the challenge. Regardless of who is in there, guys are going to step up, play well and execute their job.”

Kevin Stefanski has “newfound respect” for fans who watch on TV, expects to return to practice Thursday
Kareem Hunt set for emotional matchup vs. Chiefs as he tries to get hometown Browns a step closer to Super Bowl he craves