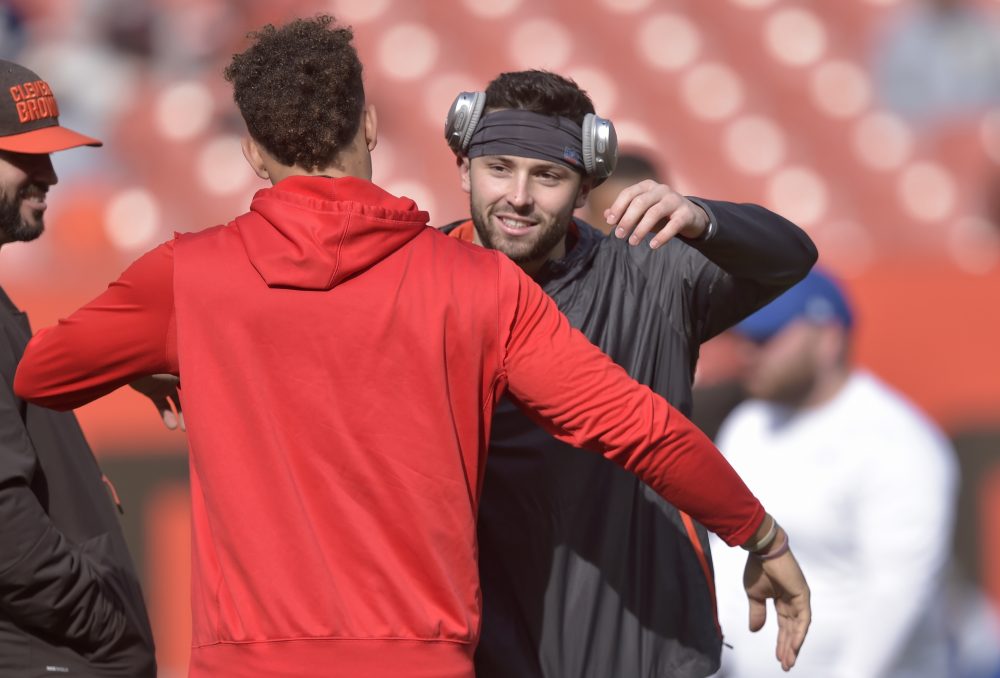 The NFL playoffs are always about the quarterbacks.

This AFC postseason is about the young quarterbacks.

Baker Mayfield is the graybeard of the whippersnappers. He’ll turn 26 in April.

“My mother-in-law sent me something the other day and told me I was the old guy,” Mayfield said Wednesday. “It is because I took my victory lap loud and proud at Oklahoma.”


Mayfield, who went back for his senior season and won the Heisman Trophy, and the Browns play Patrick Mahomes (he’ll turn 26 in September) and the Chiefs on Sunday. Josh Allen (25 in May) and the Bills face Lamar Jackson (turned 24 last Thursday) and the Ravens on Saturday night.

“It is fun to see these guys who I am familiar with and have been following for a little bit and to see them competing at such a high level,” Mayfield said.

Mahomes entered the league as the No. 10 pick in 2017, was NFL MVP in 2018 and Super Bowl MVP last year in the win over the 49ers. Jackson, the No. 32 pick in 2018, was NFL MVP last season, has been to the playoffs all three years and picked up his first win Sunday in Tennessee. Allen, the No. 7 pick in 2018, is in the MVP discussion this season and got his first playoff victory Saturday against the Colts in his second try.

Mayfield, the No. 1 pick in 2018, has some catching up to do regarding NFL resumes but is gaining ground by the game. He’s 1-0 in his playoff career after the 48-37 upset of the Steelers in which he attacked the aggressive Pittsburgh defense with quick decisions and precise passes. He was 21-for-34 for 263 yards, three touchdowns and a 115.2 passer rating.

Coach Kevin Stefanski said getting rid of the ball on time will be just as important against the pass rush of the Chiefs, who rank fourth with 63 quarterback knockdowns, 12th with 150 pressures and 19th with 32 sacks. The Chiefs defense ranks 14th against the pass (236.2 yards a game) and 10th in opponent passer rating (89.4).

“You have to trust your eyeballs first and foremost as a quarterback,” Stefanski said. “In every play, the ball goes based on what the defense gives you, and I think Baker is seeing it really clearly so that you can get through your progressions quickly. When sometimes there is not somebody open, that is where he has done a nice job of buying time, throwing the ball away or what have you.”

Not only is Mayfield playing like a completely different quarterback than the one who threw 21 interceptions last year, he looks like the long-term answer for a franchise that hasn’t had one since Bernie Kosar in the late 1980s. He followed 11 regular-season wins with the franchise’s first playoff win in 26 years and the first in three tries against the Steelers. In his last 349 passes, he’s thrown 19 touchdowns and one interception.

Those are Mahomes type numbers.

“After the bye week we were able to sit down and kind of go through things and just make sure we were all on the same page,” Mayfield said, referring to Stefanski and coordinator Alex Van Pelt. “You do not try and do too much. You stick within the plan, do the little details right and stay efficient. The guys up front and the skill guys around me have made my job extremely easy.”

Running back Nick Chubb believes Mayfield is “100 percent” built for the intense spotlight of the playoffs.

“This is the guy who I have always seen since I have been here and the guy I played against when I was at Georgia and he was at Oklahoma,” he said. “He has always been that guy. He is just showing it more.”

Each team totaled 854 yards of offense. Mayfield passed for 545 yards and seven touchdowns and wasn’t close to matching Mahomes, who was 52-for-88 for 734 yards with five touchdowns and an interception.

“Honestly, no, I have not,” he said. “Just the efficiency and spectacular plays, it was fun to watch. It has always been fun to keep up with Pat.”

“It is always fun to play friendly competition and playing against people you are familiar with,” Mayfield said. “He has gotten me so far in the league so I have to see what I can do.”

“Baker always has that underdog mentality, and I am sure that is in his mind right now,” Chubb said. “He wants to go out and prove himself even more.”

The Chiefs have the league’s No. 1 passing offense (303.4) and No. 6 scoring offense (29.6). The Browns will do everything possible to try to slow down the Chiefs, including controlling the clock with the ground game, but Mayfield said they must remain aggressive on offense.

“You do not want to play the clock game early. You want to play to win, that is for sure,” he said. “We just have to do a better job of scoring in the red zone. We want to be more efficient down there when it comes to touchdowns and also just staying on the field and third-down percentage. It is just us doing the things we have been trying to emphasize.”

As Stefanski watched from his basement Sunday after testing positive for COVID-19, he was impressed by the entirety of Mayfield’s performance.

“He’s a heckuva player,” he said on a conference call with Browns beat writers. “He’s driven. He wants to be great, and so that’s how he goes about his business. He’s made huge strides, and I just like his attitude.”

So do Mayfield’s teammates. His belief in himself and the team has been contagious.

“He is a winner. That is his mindset,” Chubb said. “He is intense. He loves the game.

“He is also just a cool guy. You can talk to him about anything, and he is very down to earth. He is just a lovable guy. Everybody wants to be around him. That is just who he is.”