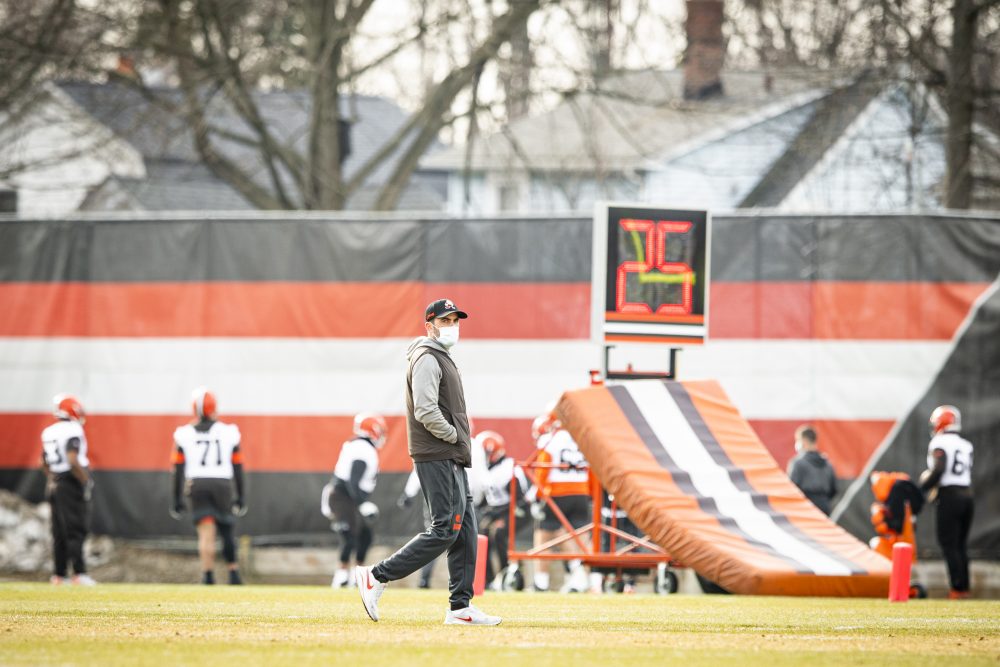 After isolating following a positive test for COVID-19 on Jan. 5, Stefanski doesn’t plan to return to his basement for the foreseeable future.

“Those walls were closing in on me,” he said Thursday in his first day back. “I’m enjoying this big building and those fields. I can’t wait to get out on them.”

Stefanski spoke before the afternoon practice and was asked what he missed the most.

“On a professional level, just being around the coaches and players, and then isolating from my family is no fun, I should mention that,” he said.

Receiver KhaDarel Hodge was activated from the COVID-19 reserve list and practiced.

Pro Bowl left guard Joel Bitonio was also eligible to be activated but wasn’t cleared. The hope is he returns Friday or Saturday.

“Getting Joel back, obviously, would be big, and hopefully that’ll be the case,” coordinator Alex Van Pelt said. “We’ll see here later in the week. Joel’s a huge part of our success offensively on that left side and to plug him back in there would be huge for us.”

Bitonio is the only player left on the list after more than two weeks of issues with the virus. Tight ends coach Drew Petzing, defensive backs coach Jeff Howard and assistant offensive line coach Scott Peters remained out.

The coaches and players were happy to have Stefanski back after he was forced to watch the 48-37 wild card win over the Steelers from home.

“It’s great. He deserves to be back,” said special teams coordinator Mike Priefer, who served as acting coach against the Steelers. “Anytime your leader comes back to the building and he’s going to lead us into battle this weekend, I think it’s a great thing for our football team.”

The Browns play the top-seeded Chiefs on Sunday in Kansas City, Mo.

Van Pelt, who called plays in place of Stefanski against the Steelers, believes his return will provide a boost.

“It’s huge,” Van Pelt said. “He’s such a presence around the guys, he was greatly missed while he wasn’t here, so having him back is big for us.”

Stefanski said he was already the object of a practical joke, although he couldn’t tell.

“Case Keenum told me he hid something in my office and he asked if I smelled it yet,” he said. “But I don’t because I’ve lost my sense of smell.”

After saying on social media Monday that the Browns are going to “get clapped” by the Chiefs, he defended the remarks during an interview with DAZN Canada.

“Not that I’m praying on them getting beat really bad, but someone had asked me for a score prediction and that was just kind of a way of me saying I think the Chiefs are going to beat the Browns,” Claypool said. “If the Browns had won with more class, then I wouldn’t have been so salty about it, but them mocking JuJu during the game and after the game just didn’t sit right with me.”

He was asked what the Browns did toward receiver JuJu Smith-Schuster, who upset Browns players by saying before the game the Browns were the same team they’d always been. “The Browns is the Browns,” he said.

“They were just super classless, you know against JuJu, towards JuJu what they were saying on the field towards the end of the game, so I’m not going to have respect for a team that doesn’t have respect for us,” Claypool said.

The Browns copied Smith-Schuster’s signature dance on the sideline and in the locker room. Linebacker Sione Takitaki responded to Claypool’s original comments in a radio interview, as did defensive end Adrian Clayborn.

“I don’t mind it,” Claypool said of the responses. “They can enjoy the win and another week of football but they’ll be on the couch right next to me, so it’s all good.”

Takitaki took the high road Thursday when asked about the back-and-forth.

“I have nothing to say about that,” he said. “I feel like the game’s over. We’re not playing those guys. We want to lock in on Kansas.

“But obviously he’s a great player. A great player, a good kid. But, yeah, we’re locked in for Kansas. So hearing all that, we’re way past that.”

Coaches, Baker Mayfield turn to Jarvis Landry in big moments and he delivers

Right tackle Jack Conklin (hamstring), linebacker B.J. Goodson (shoulder) and tight end David Njoku (hamstring) didn’t practice for the second straight day. Conklin and Njoku worked on the side and Goodson wasn’t on the field during the portion of practice open to reporters.

“I know he fought through getting banged up a little bit and he is doing that throughout this week, but he will be ready to go on Sunday,” Woods said of Goodson.

“I feel like he will be ready to go,” Woods said.

** Strong safety Ronnie Harrison played only 11 snaps against the Steelers after missing the team’s lone practice last week following a false positive COVID test. His workload will increase this week.

“I do expect more from Ronnie. He is ready to go,” Stefanski said. “He was kind of in and out of the lineup, so to speak, during the week last week, where he was ruled out and was able to come back. With a normal week of practice, I do expect him out there.”

Kareem Hunt set for emotional matchup vs. Chiefs as he tries to get hometown Browns a step closer to Super Bowl he craves

Priefer choked up Sunday talking about what the win meant to the city. As acting coach, he delivered his hometown the first playoff win in 26 years.

“Made some phone calls from the locker room after the game,” he said. “I talked to my wife, my kids and my dad. My mom was asleep, but we woke her up and talked to her real quick. Obviously very excited for our whole family, for our city and for all of our fans.”

His wife and kids were at Heinz Field to watch his big moment.

“It is something that we will never forget as a family,” Priefer said.

“Don’t be suprised (sic) this weekend when they win….” he tweeted, “just throwin it out there now”