Coaches, Baker Mayfield turn to Jarvis Landry in big moments and he delivers 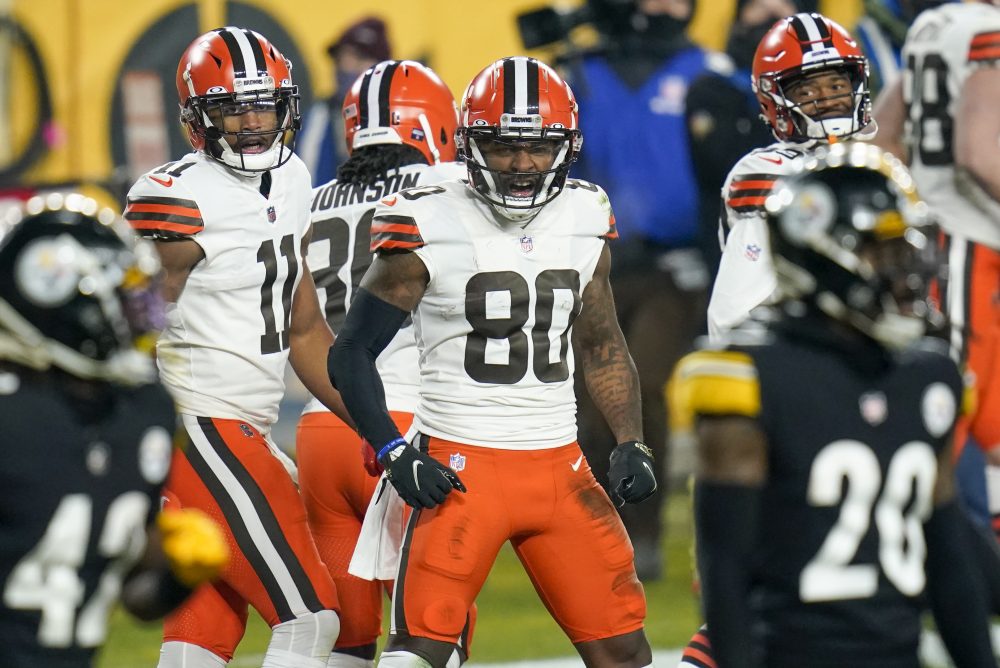 BEREA — The Steelers were threatening.

The Browns’ lead had dwindled from 28 points to 12 and they were in danger of punting for a fourth straight possession in the second half. Facing third-and-2 from the Cleveland 28-yard line Sunday night, substitute play caller Alex Van Pelt turned to receiver Jarvis Landry.

Baker Mayfield hit Landry on a short out and he picked up 17 yards down the sideline. Three plays later Nick Chubb took a screen pass 40 yards for a touchdown to regain a three-score lead.

“It was huge. It was one of those ones that on the call sheet you look down and it kind of just jumped off at you because Jarvis is really one of the primary receivers on the play,” Van Pelt said Thursday. “There is an old saying in coaching, ‘In times of crisis, think of players not of plays.’ It was find a way to get the ball to No. 80.”


Coach Kevin Stefanski was watching from his basement and approved of the strategy he used with increasing frequency as the season progressed.

“We call his number in big moments, and he has come through for us,” he said of Landry. “He understands his role and that we are counting on him. He gets that.”

Landry caught five passes for 92 yards, including a 40-yard touchdown, in the 48-37 wild card win. In the last six games, he has 39 catches for 461 yards and four touchdowns as he got healthier following offseason hip surgery and a cracked rib in October. He’s helped fill the large void left by Odell Beckham Jr., who’s out for the year with a torn anterior cruciate ligament.

Landry spoke last week of the need to bring heightened intensity for the playoffs right from the start. He couldn’t have imagined a fumble recovery for a touchdown on the first snap from scrimmage and a 28-0 lead by the end of the first quarter as the Browns flew around the field.

“It was very exciting,” said Landry, who got the first playoff win of his seven-year career. “One of the things that I have always believed in and I always heard people say is, ‘have an energy that is unmatched.’ For us, I think having the attitude that we had going into that game and the way that we were approaching it is something that you saw out of every guy from the first play of the game.

“It definitely is encouraging to see. The bigger the opportunity, the more energy you have to bring, the more attention to detail and the more together you have to be. We have been through a lot this season throughout COVID, throughout injuries and throughout wins and losses. For us, that has kind of helped us realize in a sense that we have to have that energy and find ways to keep it and feed off of each other.”

Stefanski is impressed that Landry can find another level of intensity after approaching every day with maximum effort.

“He treats every practice like it is a game,” he said. “The players follow his lead, and he knows that. He brings a level of intensity to all of these get-togethers.”

“He does have a voice on the offense. He is definitely a leader of the offense. When he talks, I listen. He deserves that. He earns that. When the time comes, you call his number and he makes plays.”

Commentary: Upsets can happen — even for the Browns

The Chiefs are the Super Bowl champion, the AFC’s No. 1 seed and a step up in competition from the Steelers. Landry’s mindset remains simple.

“To win,” he said. “Always in this league, I feel like it is an ‘any given Sunday’ type of mentality. We have always looked at this season as a one-game season — one week, one game at a time. I think that is no different.

“We are playing a really great football team. I think they understand that we have a mutual respect. It’s going to be a football game.”

Browns legend Joe Thomas “overjoyed” for team’s success, doesn’t dwell on never making playoffs, believes team is set up to win over long haul
With 10 title games, 7 championships, Otto Graham deserves to be mentioned with Tom Brady in discussion of Greatest of All Time