Commentary: Upsets can happen — even for the Browns 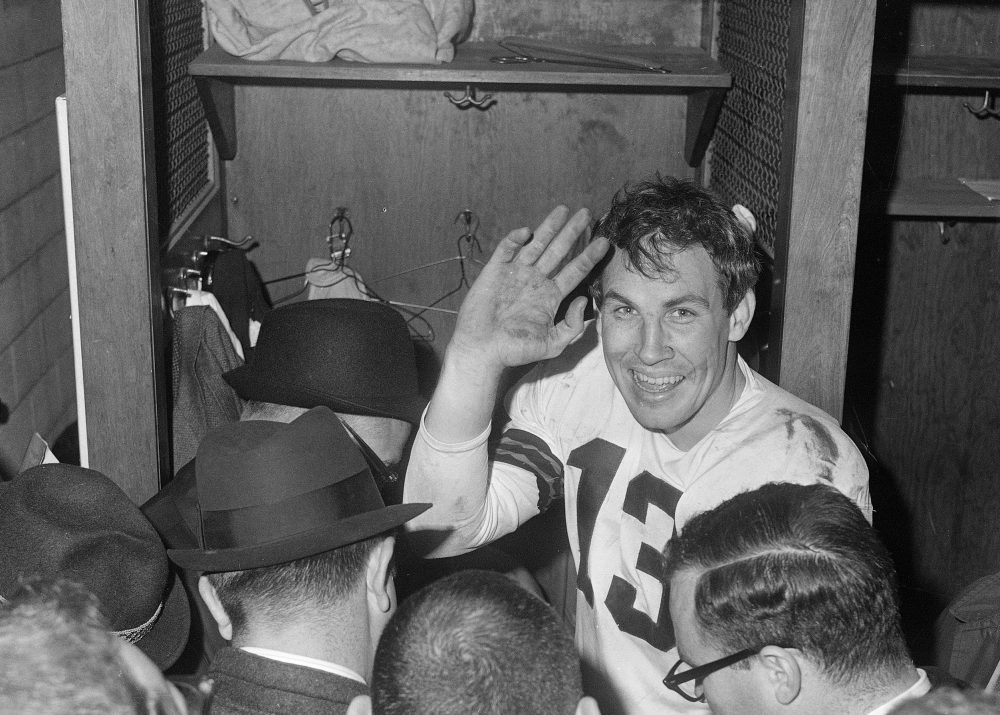 “The skies were a sullen gray, heavy with their freight of unspilled snow. The field was a spongy carpet of uprooted turf and the barren infield. The official game-time temperature was 32, but the wind of 20 mph kicked up white caps on Lake Erie and bit deep into the bones of the 79,554 customers.”

There are no lakes, no white caps to be kicked up, near Arrowhead Stadium in Kansas City, Mo. But on Sunday there will be a football game. Not near it. In it.

From the perspective of one of the franchises, though not for the players — they’re far too young — Sunday’s game in Missouri has some deliciously haunting parallels to the one Red Smith chronicled, starting with his honeyed scene-setter, a game played in Cleveland, on a gloomy but glorious Sunday afternoon 57 years ago, in a stadium that no longer exists.

Sunday’s game between the Browns and the Kansas City Chiefs isn’t for the NFL championship, which is what the Super Bowl was called before it was called the Super Bowl, but it is a playoff game that for the Browns has some strikingly similar window dressing to that day five decades ago, when the wind kicked up white caps on Lake Erie, and the Browns kicked the horseshoes off the Baltimore Colts.

The Browns on Sunday will play the Chiefs, the reigning Super Bowl champs, quarterbacked by the magical, unstoppable Patrick Mahomes.

In the 1964 NFL Championship game the Browns faced the Colts, whose quarterback was Johnny Unitas, at the peak of his Hall of Fame career.

The Colts scored an average of 31 points per game.

For the season they scored 428 points.

The 10-3-1 Browns had five future Hall of Famers, but only four of them — Jim Brown, Paul Warfield, Gene Hickerson and Lou Groza — played in the game. The other, rookie running back Leroy Kelly, did not play.

The Colts’ offense was by far the most prolific in the league. Coming into the game the Browns’ defense had gone five years and 57 consecutive games since their last shutout.

Counting the next two NFL champions, in 1965 and ’66, plus the 54-year Super Bowl era, the Browns’ 27-point victory over the Colts is tied for seventh as biggest margin of victory in the league’s championship game.

The Browns on Sunday will play a Chiefs team so good, so dominating, so offensively intimidating, with a Hall of Fame-bound quarterback whose skill set is unlike anything the league has ever seen, that for much of the regular season they seemed to be bored by the competition.

In 1964, the Browns were looked at as a very good team, but the Colts were viewed as a super team. The Colts were a 7-point favorite.

The Chiefs, at last glance, are 10-point favorites to beat the Browns. That’s a huge number for a playoff game, especially for a second-round playoff game.

The tournament is down to the final eight. The Browns are one of them, and they are 10-point underdogs.

Worse yet, that sounds about right.

But (all together now), this is why they play the games.

It’s happened twice to the Chiefs, whose two losses came against two teams, the Raiders and Chargers, that didn’t even make the playoffs.

So the Browns have that going for them.

Now all they need are some skies that are a sullen gray, and heavy with their freight of unspilled snow.

Commentary: From coach to QB to resilience to results, these certainly aren’t the same old Browns
Browns vs. Chiefs: Breaking down the matchups