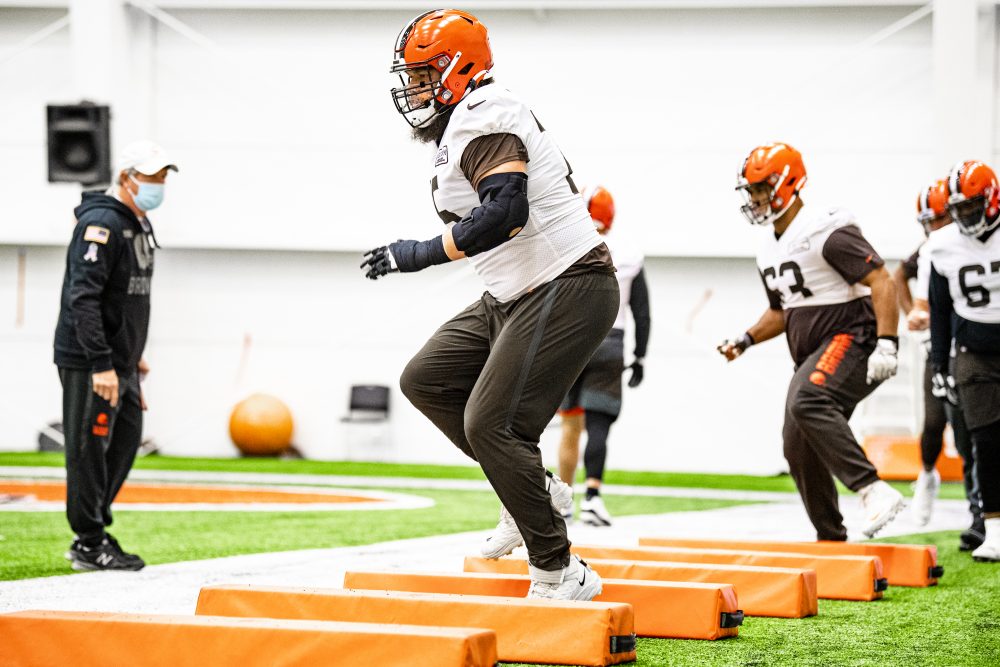 Joel Bitonio couldn’t be in the locker room for the celebration after the Browns beat the Steelers 48-37 in the wild card game at Heinz Field, but his neighbors made him feel like a part of the party.

“After the game, they were outside of my house going crazy and lighting off fireworks,” he said Friday. “My wife got some of the footage on video. It was pretty cool.”

Bitonio, the Pro Bowl left guard, watched the game from his basement after testing positive for COVID-19 on Jan. 5. He was activated from the reserve list Friday, practiced and will be in the starting lineup Sunday in the divisional round against the Chiefs in Kansas City, Mo.

Bitonio toiled through six losing seasons before the Browns broke through this year. After missing his first shot at a playoff game last week in Pittsburgh, he’s grateful and eager for a second chance Sunday.

“Obviously I am excited,” he said. “I am ready to be out there, I am ready to play and do my best, but it was always about the team and how they were going to respond.”

The organization is thrilled for him.

“Elated for Joel,” general manager Andrew Berry said. “He has been a leader, consummate teammate, everything that you could really want out of a player. We were all heartbroken when he wasn’t getting the opportunity to play in his first playoff game, so for us to be able to activate him today and for him to be able to take his place in the starting lineup this weekend against the Chiefs, it really does mean everything.”

Bitonio was the last player remaining on the COVID reserve list after weeks of issues with the virus for the organization. The Browns also got back tight ends coach Drew Petzing, defensive backs coach Jeff Howard and assistant offensive line coach Scott Peters on Friday after they tested positive last week.

Bitonio was voted to his third straight Pro Bowl last month, this time as a starter, so his return is significant.

“Just having his presence as a leader on the offense and his ability to block whoever in pass and run, that is something you can’t put a value on,” defensive end Myles Garrett said.

Left tackle Joe Thomas, who lined up next to Bitonio for almost four seasons, never made it to the playoffs in his legendary 11-year career. They remain close, and Thomas is happy Bitonio will get the chance he never did.

“I never got to taste it, but everybody talks about how special and sweet it is,” Thomas told The Chronicle-Telegram this week. “And you never know when those chances are going to be the last chance. You’ve got to make the most of those opportunities, and for Joel to have it ripped from him was heartbreaking. So getting that second opportunity for him, I’m so happy. I’m overjoyed.”

Bitonio lost taste and smell and was tired but was grateful his symptoms weren’t worse and his family stayed healthy. He was also “very appreciative” of everyone who reached out to him last week and for his teammates saying they wanted to win so he’d have the chance to play this week.

“It means a lot in the sense that I have been here for a long time, and you try and put in everything that you can and you want to be in those big games and you watch your teammates and stuff play in those big games,” Bitonio said. “To hear a guy like Jarvis (Landry) or Baker (Mayfield) say that they are playing for me was big. I was just proud of everybody, and I am ready to be out there with those guys this week.”

Kareem Hunt set for emotional matchup vs. Chiefs as he tries to get hometown Browns a step closer to Super Bowl he craves
GM Andrew Berry says Baker Mayfield has “grown up before our eyes,” Browns aren’t ahead of schedule in reaching divisional round of playoffs