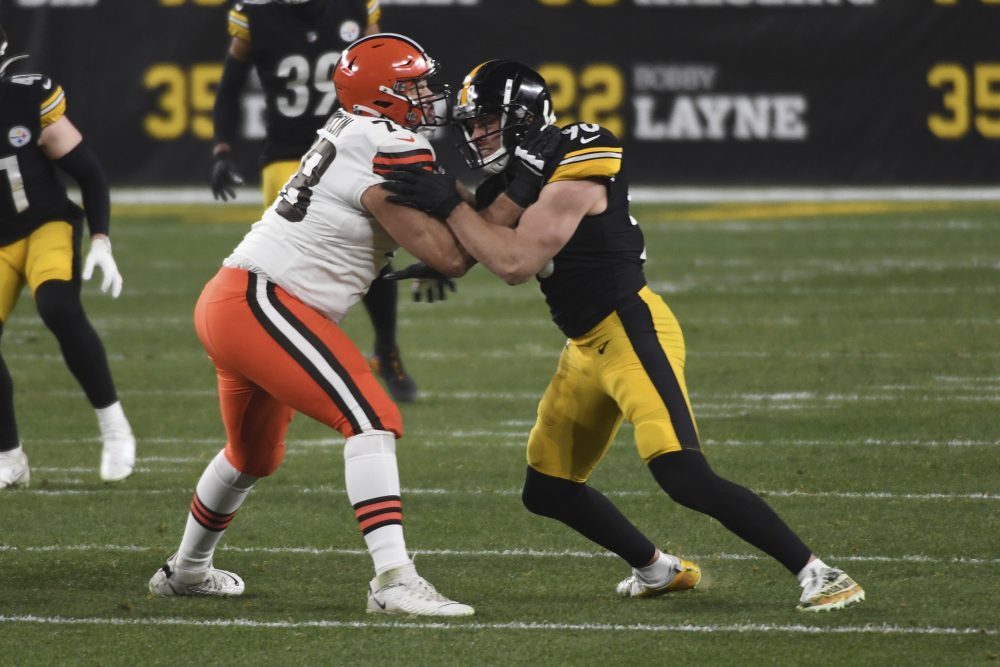 Coach Kevin Stefanski said they’d see how the players respond to the practice before determining their availability for Sunday. Goodson was confident Wednesday he’d be able to play.

Conklin was an All-Pro this season. He left in the second quarter of the 48-37 wild card win over the Steelers on Sunday night and was replaced by Kendall Lamm.

“We’ll see how he responds over the next 48 hours,” Stefanski said of Conklin. “Been a good player for us and we’ll see how the next few hours go with all of those guys. Obviously you want to go into the game with a full complement of your players, and we’ll see how it shakes out.”

With left guard Joel Bitonio activated Friday from the COVID-19 reserve list, the Browns would have their normal starting line if Conklin can go. Pro Football Focus ranked it the best unit this season at run blocking and pass blocking.

If Conklin can’t play, Lamm would get the start. He’s started 27 games in his six-year career.

“I think very highly of Kendall — the person and the player,” Stefanski said Thursday. “He has been very versatile for us to line up all over and gives a great look during the week when he was giving scout team looks.

“He is somebody who has performed well when he has gone in there. Very much on top of the game plan. Works very hard pre-practice and post-practice.”

Chiefs starting receiver Sammy Watkins was ruled out with a calf injury. He created a bit of controversy when he tweeted “I wouldn’t go that far lol..!” when someone suggested the Browns would provide competition coming off the win over the Steelers.

Linebacker Willie Gay Jr. (ankle) was also ruled out, while running back Clyde Edwards-Helaire (ankle/hip) and tight end Deon Yelder (groin) were listed as questionable after not practicing. Cornerback Rashad Fenton (foot/ankle) was limited and questionable.

The Browns will host a drive-thru rally at FirstEnergy Stadium on Saturday from 11 a.m.-4 p.m. in advance of the game vs. the Chiefs.

Fans must enter in their cars by accessing Alfred Lerner Way from the East Ninth Street bridge and Erieside Avenue. Fans won’t be allowed to exit their cars during the route, which will feature Browns alumni and Chomps socially distanced.

** Safety Tedric Thompson was waived to make room on the roster for Bitonio.