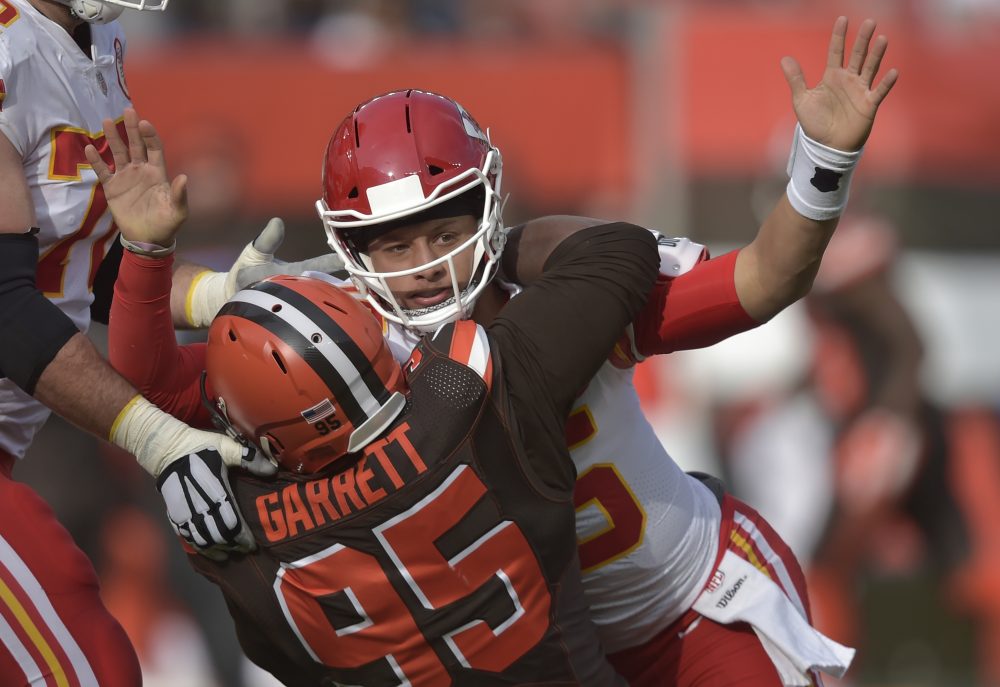 Chiefs quarterback Patrick Mahomes and his fiancée are expecting their first child, a girl.

Myles Garrett is already planning story time for them.

“I want him to be able to go home when he has his kid or kids and tell them that he went against Myles Garrett,” Garrett, Cleveland’s All-Pro defensive end, said Friday. “It is not just me versus him — it is the Browns versus the Chiefs — but individually, I like to leave an impression on everybody I go against.”

Garrett believes he’s “due” to make a big impact in a game, and the divisional round of the playoffs Sunday in Kansas City vs. perhaps the NFL’s best quarterback would be the perfect time.

Garrett referred to Mahomes as the offensive face of the league. He was the MVP in 2018 and the Super Bowl MVP last season when the Chiefs beat the 49ers.

“The guy is great with his feet and he is great throwing off of the run,” Garrett said. “He can make plays in any part of the field so we have to be prepared for that. Do not jump for those ball fakes. If you take your shot at him, make it clean and try to take the ball away from him.

“The best place to be on the field with Patrick is with the ball in our hands instead of him because he is great with it.”

Garrett fell out of contention for NFL Defensive Player of the Year when he missed two games with COVID-19 but aspires to be considered on the same level as Rams defensive tackle Aaron Donald, whom he called the defensive face of the league. Garrett expects greatness from himself and has never shied away from his goals of being an MVP and Hall of Famer.

He returned to play the last five games of the regular season but has only 2.5 sacks in his last six games, including being shut out in the 48-37 wild card win over the Steelers. He finished the regular season sixth in the league with 12 sacks.

Garrett still feels the aftereffects of COVID but is doing better. He’s also been battling weekly double and triple teams.

“It definitely takes a toll on you during the game having to fight against multiple people,” he said. “You just have to know that your time will come. I got close a couple times (vs. the Steelers) but I am due.”

Garrett took note of the disrespect from Steelers receivers JuJu Smith-Schuster and Chase Claypool the last couple of weeks but said it’s up to the Browns to keep proving the doubters wrong.

“You have to prove what you are worth day in and day out,” Garrett said. “No team and no person individually was treated or held in high regard until they proved that every time they showed up. We just have to clock in and show what we are worth every time we are asked to. Every time those lights are on and we are on the field, we have to show that we are a great team. Here is another opportunity to show that.”

“That is just one game. It takes more than one outing,” Garrett said. “We have to keep proving it, not only to them but to ourselves.

“We have to make it routine, like the Patriots dynasty. Guys just assumed they were winning every time they looked at the schedule. We have to get that same kind of mentality here.”

“He has provided great leadership throughout this season,” Stefanski said of Garrett. “He is a player who shows up and gives us everything he has. He plays hard through the whistle. He plays hard for the entire 60 minutes or more. That is a great message for our players.”

Garrett isn’t about to let up at this stage in the season. He’s trying to push the team to the Super Bowl.

“We are here. We might as well be great,” he said. “Nobody is excited about just getting a ticket to the dance. Like I said, you want to dance with the pretty girl. You want to shoot your shot, and the worst she can say is no.

“As long as you go out there and you take your best shot, you will be proud of the result, but we are not satisfied until we see how far we can get.”

Despite being new to the playoffs and 10-point underdogs to the top-seeded Chiefs, the Browns are a confident bunch.

“I do not think you would step on the field unless you believe in yourself,” Garrett said. “You do not get here doubting yourself, your ability and your teammates, especially not in the playoffs.

“These guys believe in themselves because they have proven it time and time again that they deserve to be here and they have made the plays that they needed to make. As long as you are here, you can go as far as you want to go as long as you put the work in and prepare.”

GM Andrew Berry says Baker Mayfield has “grown up before our eyes,” Browns aren’t ahead of schedule in reaching divisional round of playoffs
Deep supporting cast plays starring role, as Browns get key contributions from up and down roster