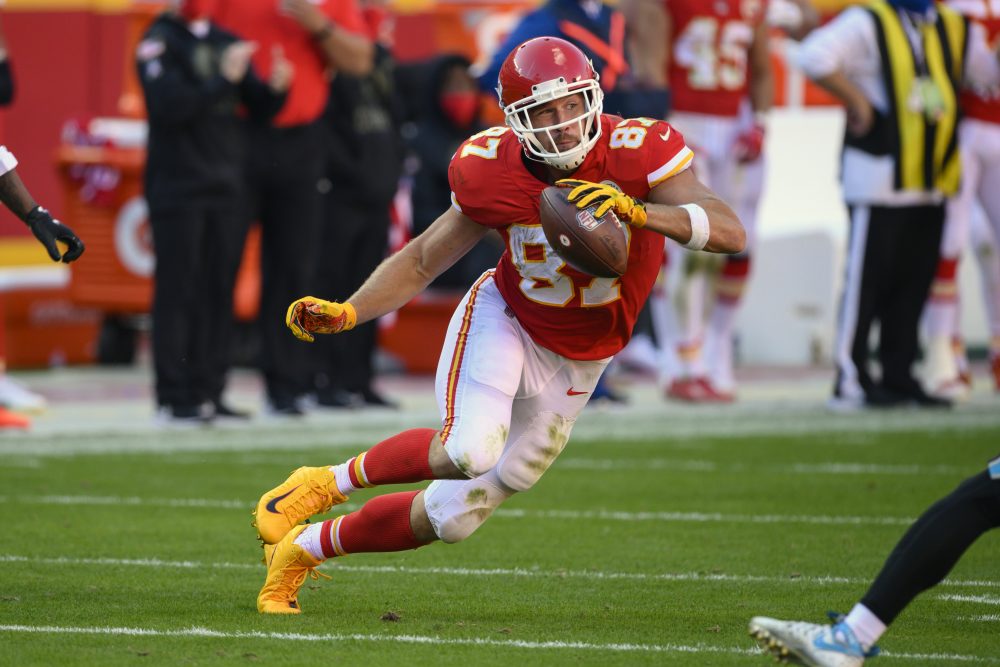 Kansas City’s Travis Kelce is having one of the best seasons for a tight end in NFL history. He set a record for the position with 1,416 receiving yards on 105 catches, including 11 touchdowns. The yards ranked second in the NFL behind Bills receiver Stefon Diggs’ 1,535, the catches fifth and the TDs tied for fifth. When quarterback Patrick Mahomes needs a sure completion, he finds the 6-foot-5, 260-pound target from Cleveland Heights who was a unanimous All-Pro selection this season.

“Nightmares for sure,” Browns defensive coordinator Joe Woods said. “He is really a receiver playing tight end. Very athletic. Has very good moves off of the line of scrimmage. Has the length to create separation and the speed to create separation, and the hands to come down with the catches. We are going to have to do different things just to make it tough on him. He is going to get his catches. We just have to hold him to not getting the big ones.”

Kelce said his family and friends want success for him but might be pulling for the hometown Browns to pull out the victory. He won’t make that easy. He can post up safeties in the red zone and run away from linebackers in the open field.

“You just have to defend him the best that you can,” linebacker B.J. Goodson said. “I think the important thing is just being in position to compete and contest.”

“I just feel like you have to have a mix of coverages,” Woods said. “There are different things you have to do just to give them different looks. If you are in a position to play man, you just have to go play man and you have to try to play your technique and put hands on him. He is hard to deal with, and we will have a couple of things to put ourselves in the best position we can.”

Teams have been burned trying to cover Hill with one man. Woods will likely devote a cornerback and safety as he tries to limit the deep strike and make Mahomes and Co. go the long way to score.

“He is an explosive player,” No. 1 cornerback Denzel Ward, who returned this week after missing two games with COVID-19, said of Hill. “It is up to us to try to eliminate those explosive plays from him and the rest of their offense.”

The first thought for the Browns game plan is to run the ball all day, control the clock and keep the ball out of Mahomes’ hands. It’s not that simple.

The Chiefs know what the Browns want to do and will do all they can to try to stop that, just like Cleveland’s previous opponents did. That means devoting extra defenders to the line of scrimmage and daring Baker Mayfield to throw. Coach Kevin Stefanski hasn’t shied away from putting the game in Mayfield’s hands — for good reason. So the plan to beat the Chiefs could start with aggression through the air in an attempt to build a lead. If the Browns are successful early, that would be the time to turn to running backs Nick Chubb and Kareem Hunt to control the tempo, use clock and wear down the defense.

“It is a fine line, but the bottom line is we just need to be us,” coordinator Alex Van Pelt said. “Our best drives are the ones where we possess the ball, take them on long drives, convert on third and fourth down and end up in the end zone. That is something that we have done pretty consistently throughout the year. Ultimately, it will be important to chew some clock and then score points.”

Stefanski has been masterful at coming up with the right approach to attack each opponent. He’s not going to stop now.

Days between the most recent road playoff victories for the Browns — Dec. 28, 1969, in Dallas and last Sunday night in Pittsburgh.

Fans allowed, approximately, at Arrowhead Stadium, as attendance is capped at 22 percent of capacity because of the pandemic.

I won’t be shocked if the Browns win. I would be surprised if they don’t play well. But I just can’t pick against Reid coming off a bye and Mahomes playing just about as well as anyone ever has. Chiefs 38, Browns 31.