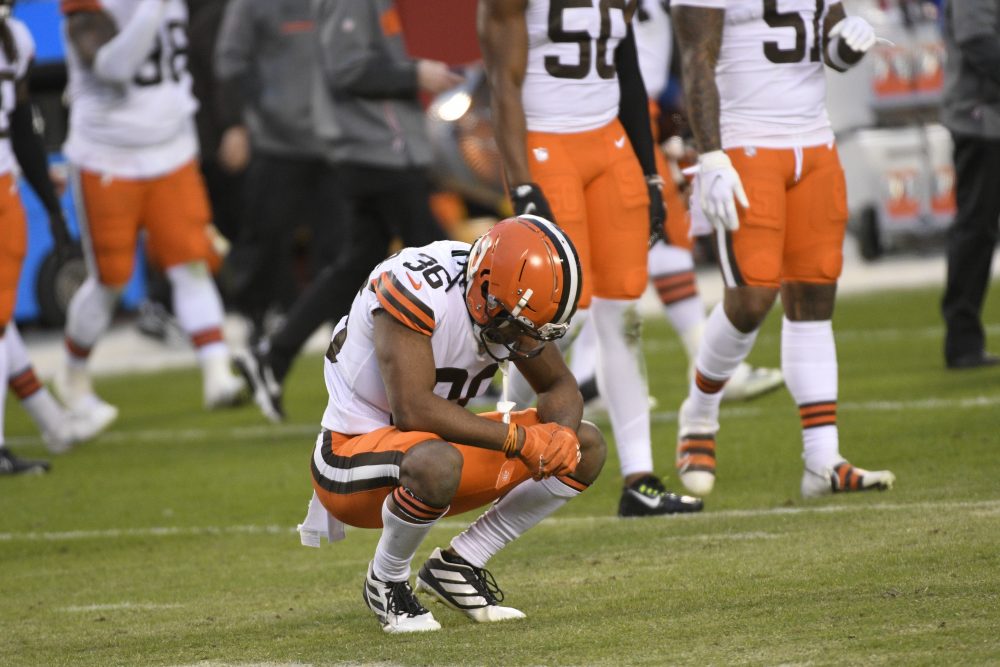 Didn’t he retire about five years ago?

It’s been so long since the Browns have been in the playoffs it’s easy to forget how painful the losses are when you get there.

This one is going to leave a mark.

For a few breathing-into-a-paper-bag moments in the fourth quarter it looked like the Browns might even out-get out of here the get-out-of-here they dropped on everyone with the win in Pittsburgh.

It was all teed up for the Browns for a storybook finish, a last-minute, shock-the-world, game-winning touchdown drive to beat the Kansas City Chiefs, sending the Browns into the AFC championship game for the first time since 1989.

But then the offense blew a tire and Chad Henne did his Chad Henne thing.

Worse yet: Chad Henne doesn’t even HAVE a thing.

With a little over five minutes remaining in the game and Cleveland trailing by what became the final score, the Browns had a first down at their 31-yard line, when they were forced to burn one of their two remaining, and extremely precious, timeouts, because they couldn’t get the play in on time.

“Miscommunication,” said Browns coach Kevin Stefanski. “Unfortunate, and that ultimately is on me.”

So were the next three failed plays: a run by Nick Chubb that lost a yard, an incompletion on an attempted screen pass and then, on third-and-11, a hurried, discombobulated swing pass to Kareem Hunt that gained 2 yards.

On fourth-and-9 at the Cleveland 32, with just over four minutes left, and with only one timeout remaining in their pocket, the Browns punted — and never saw the ball again.

Henne then put the car in the garage, and the Browns out of the playoffs, by running 13 yards on a third-and-14 play at the Chiefs 35 yard-line, followed by a 5-yard toss to Tyree Hill on fourth-and-1 — and the Browns were done, 22-17.

For tortured Browns fans it was the ultimate “Come on, man!” finish, because they had a five-minute window when they had the ball, the Chiefs on the run, a concussed Patrick Mahomes on the sidelines and the Buffalo Bills excitedly honking their horns over all of it.

It was not Stefanski’s finest hour. He cost his team timeouts by challenging a play he shouldn’t, not challenging one he should and miscommunicating his way into a wasted timeout when the game was on the line.

“All of those decisions, that is on me,” said the man who should still become the first Browns coach in 45 years to win the NFL Coach of the Year Award. “I should have been better there. There is a cost to those when you do lose those (challenges) because you lose a timeout. That is on me.”

Even with all that, the Browns still would have won had the officials not missed what should have been a helmet-to-helmet penalty on Chiefs safety Daniel Sorensen on a goal-line collision with Browns receiver Rashard Higgins. That likely cost the Browns a touchdown that likely, in the end, would have meant the Browns, not the Chiefs, would be playing in the AFC championship game.

“I’ll leave those things to the league,” Stefanski said. “There were a bunch of moments in that game that did not go our way that need to, in order to win on the road against the Super Bowl champs.”

It was a weird game all around, a game in which the Browns may have actually played better than it seemed. In the second half they outscored Kansas City 14-3. The Chiefs offense averages 30 points per game. The Browns held them to just 22. Prior to Sunday the Browns had scored 22 or more points in 11 of their 17 games. Twenty-three would have been enough to win this game, but they fell six points short.

It wouldn’t be a Browns game without an offensive lineman getting hurt, so nobody should have been surprised when Jedrick Wills limped off the field with a game-ending ankle injury on the Browns’ first play from scrimmage.

That may have been one reason why the Browns only had 18 yards rushing in the first half, during which Hunt never touched the ball.

So they finish with a record of 12-6 that is so tantalizing that next season can’t get here fast enough. The defense needs some spackle, but Baker Mayfield has proved he’s a franchise quarterback and the Browns, when healthy, have above-average players at every offensive position.

Better yet, consider this: The Browns played a football game Sunday.

The Steelers didn’t. The Ravens didn’t.

They lost, but they were still the last team standing in the AFC North. For a team that over the previous three seasons had a record of 13-34-1, that is major progress.