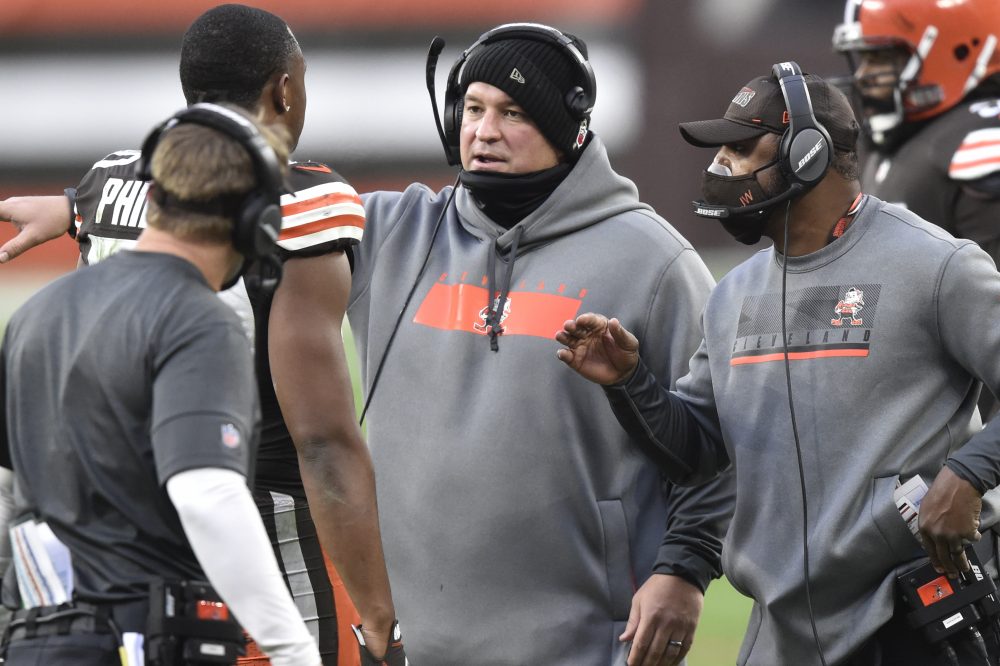 Until then, 6:57 is seared in the memory of the Browns defensive coordinator.

That’s how much time was left in the Super Bowl last year when Chiefs quarterback Patrick Mahomes hit receiver Tyreek Hill for a 44-yard completion on third-and-15 from the Kansas City 35-yard line.

At least, that’s the time on the clock that stuck with Woods, who was pass game coordinator/defensive backs coach for the 49ers. The play started with 7:13 left and Hill was tackled with 7:02.

What’s five seconds when the Super Bowl starts to slip away?

The memory was relevant as Woods prepared to face Mahomes and the Chiefs again Sunday in the divisional round of the playoffs.

The 49ers led 20-10 and had stifled the high-powered Chiefs for 3½ quarters. Mahomes had thrown for only 181 yards with two interceptions. Two more snaps without a first down, and San Francisco would’ve been sitting pretty.

But Hill got free behind the secondary and Mahomes found him for the game-changer. The Chiefs scored four plays later, starting a string of three touchdowns in three drives as they pulled away for a 31-20 victory that broke Woods’ heart.

“I have watched that game once,” he said Thursday. “It is kind of tough to watch, but they are explosive. I think we held them down pretty good until 6:57 left in the fourth quarter, to be exact, and they went off. They have the ability to do that at any point in the game.

“We are going to have to play our best game just to have a chance to compete and win against these guys.”

Woods has plenty of negative experiences against Mahomes and the Chiefs. He was defensive coordinator of the Broncos in 2017-18 and saw Kansas City twice a year — losing all four — with Mahomes winning MVP in his first season as the starter in 2018.

“He is unbelievable,” Woods said. “He is definitely one of the top quarterbacks in the league, obviously by what he has done. He has the arm strength to make all of the throws. He sees it all. He is mobile in the pocket. Whether he is moving to his right or left, he can make accurate throws and crazy throws and have success.

“We have to be at our best with our rush plan, just in terms of trying to keep him in the pocket and affecting his ability to throw the ball on time.”

Woods will rely on All-Pro defensive end Myles Garrett to bother Mahomes as much as possible. Garrett said he’s “due” for a big game and wants to leave an impression on Mahomes.

“He is deceptive with his deep drop-back,” Garrett said. “He does it because he has the arm to make up for it, but he also drops back that far and then steps up 2 or 3 more yards so that you are bending pretty much at a fishhook angle to get back to him.

“You really have to kind of anticipate what he is going to do. You can’t always think he is going to step back deep because he either steps shallow or he steps up so you have to be ready to counter back or to push into one of the other three guys or two guys on the line. He has his own style, and I think we are prepared.”

Defensive end Porter Gustin, who will get more playing time with Olivier Vernon out after his Achilles tendon ruptured in the regular-season finale, said he’s concentrating on being disciplined in his rush. He’s also looking for Garrett to dominate.

“You never know when it’s going to happen, but it could be at anytime,” Gustin told The Chronicle-Telegram. “Even the games where he’s not putting up the big stats or coming out with two sacks and a sack-fumble, he’s still affecting the quarterback.

“It’s a big-time game, I know he’s prepared and he’s ready and his mind’s right.”

Woods doesn’t need a reminder, but Mahomes might be even more dangerous when the Chiefs are trailing. They were behind by at least double digits in all three playoff wins last year.

“He has a knack,” Woods said. “It speaks to his ability to run the offense and create plays, whether it is just him throwing the ball at times or scrambling around and making throws. You have to have confidence. A lot of times when those things happen, when you look on the other side of the ball there is a breakdown defensively and there is a reason why those plays are created.

“Some of them is just him making a great play, but you really just have to be on top of all of your rules in terms of your coverage, in terms of plastering receivers and in terms of the rush and having a good rush plan.”