Mailbag: How does this season compare to playoff runs of the 1980s? When will Baker Mayfield get extension? How many touches for Nick Chubb vs. Chiefs? 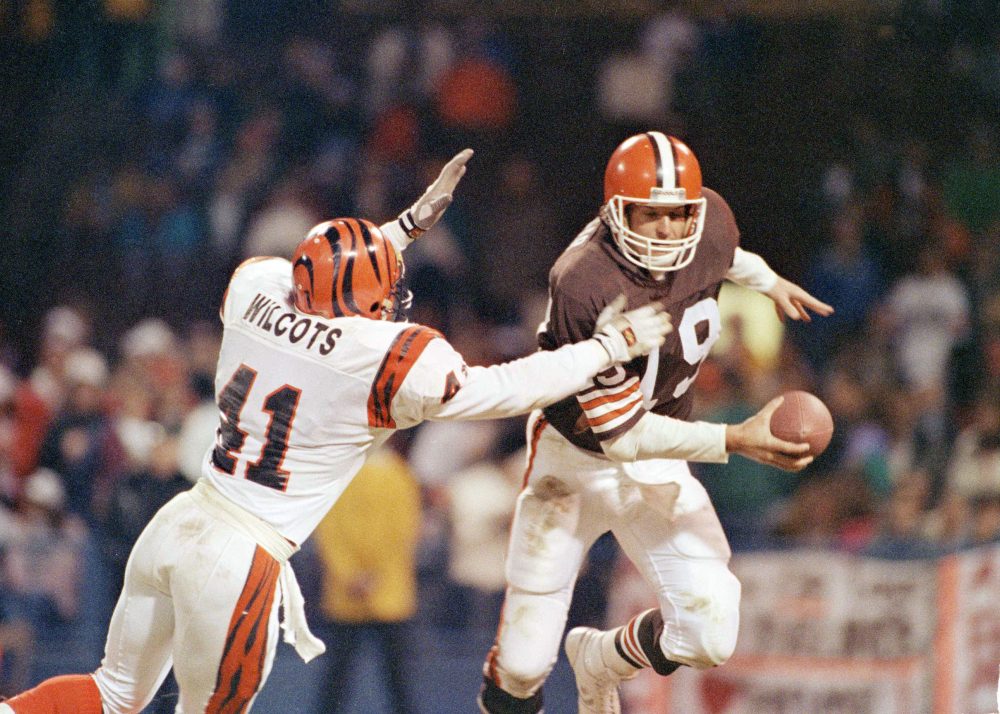 Q: Where would you rank this season compared to the Bernie Kosar playoff runs? It’s probably more remarkable, if not more special.

As a young teenager in love with Cleveland sports teams, the Kosar teams of the 1980s made a lasting impact, one that grew stronger when the Browns stopped winning. I would think people around my age would be more likely to pick those teams, especially given their three trips to the AFC championship game within four years.


But there’s also a case to be made for the 2020 Browns. I would argue the success was unexpected after last year’s debacle and the difficult circumstances of this season, the first under coach Kevin Stefanski. The excitement level is also raised after so many years of losing. And it seems like the organization is built to keep winning over the next several years.

For now, I’ll give the runs by the Kosar teams the edge. That obviously would change with a trip to the Super Bowl.

Q: What is your guess on when Baker Mayfield gets a contract, and what would you expect it to look like?

A: I wouldn’t have said this two months ago, but I believe Mayfield will get a long-term extension this offseason, probably in April before the draft. The uncertainty surrounding the offseason schedule because of the pandemic — the combine won’t be the same, perhaps the draft could be delayed, the salary cap will shrink — could affect the timing, but a Mayfield extension seems like sure thing. General manager Andrew Berry wouldn’t talk about it Friday with his team still in the playoffs, but he raved about the growth Mayfield made in the second half of the season.

The terms of the deal are harder to predict. I don’t expect him to get the 10-year, $450 million contract of Kansas City’s Patrick Mahomes, but he’ll get huge money. Mayfield hasn’t consistently played at the level of Houston’s Deshaun Watson ($39 million a year) or Seattle’s Russell Wilson ($35 million), but the latest player to sign usually eclipses those before him. So I’m predicting five years for $180 million ($36 million a year), putting him third in the league behind Mahomes and Watson.

I understand the Browns could look to trade Beckham and the $14.5 million salary in 2021 that will become guaranteed in March while he continues to rehab from the surgery to repair a torn anterior cruciate ligament. But Berry has given no indication he wants to move Beckham, and I expect him to return for at least one more season. And Landry isn’t going anywhere. He’s one of the hearts and souls of the team and again proved his value over the last several games.

The rest of the extensions you mentioned are interesting. Chubb, Ward and Teller have done plenty to earn long-term deals, but I’m not sure any are slam dunks to get one, at least this offseason. Chubb plays a position, running back, that analytics suggest isn’t worth huge money. Ward has missed time with injuries in his three years, so Berry may want to wait until after 2021 before committing long term. And Teller had a breakout season this year but missed five games with injuries.

The Browns are better with all these players, but some difficult decisions will need to be made, especially with the reduced salary cap and as Berry looks to add key pieces to the defense. I expect all of them to be here for 2021. Beyond that, things get interesting.

Q: Is there any indication at practice this week that Myles Garrett has finally shaken off the affects of COVID-19? It’s agonizing watching our best defender on the sidelines sucking air on critical possessions.

A: Garrett doesn’t do enough in the approximately 25 minutes reporters are allowed to watch to say for sure. He looks good going through the drills but the intensity and repetitions aren’t anywhere close to game action.

Garrett said he’s getting better and is “due” for a big game but he clearly hasn’t been the same as he was before the bout with COVID-19. With that said, I expect Garrett to push through and do all he can to dominate against the Chiefs. If his lungs allow, he could be the man that pushes the Browns past the Chiefs.

Q: How many touches should Nick Chubb get against KC’s not-so-great rush defense?

A: Twenty seems like the magic number. I’m figuring Kareem Hunt will get 15-18, so if the tandem combines for close to 40, that’s a great sign for the Browns offense.

Controlling the clock, wearing down the defense and keeping Mahomes off the field would be key to an upset. I keep waiting for Stefanski to ride Chubb to a victory, but he hasn’t gotten 20 carries since Week 11 against the Eagles. It’s time.

Q: JC Tretter mentioned this week how fresh he was for the Steelers after staying at home those two extra days the Browns were in COVID shutdown. I never thought much of this, but even if a player does not put the pads on for practice, just the drive back and forth to Berea to some degree might slow recovery times. After 16 games, an NFL playoff team is a well-oiled machine, maybe three days of full practice is overrated compared to the physical recovery needs & mental preparation required at this point in the season? Might best practices be redefined down the road?

A: It’s an interesting topic, but I fall on the side of Garrett, who said he prefers the normal practice time and recovery routine in the team facility. There’s certainly something to be said for managing reps and getting the players off their feet as the season drags on, but practice time is also critical. The key is finding the proper balance.

Stefanski has been on top of this all year. The Browns often get their work in and get off the field in less time than scheduled.

Mailbag: Why is the game being played after all the COVID cases? Why wasn’t Denzel Ward activated? Is it too early for Kevin Stefanski’s staff to be poached?
Mailbag: Why didn’t Kareem Hunt get ball earlier against KC? Will Browns be a pass-heavy team in 2021? Should Andrew Berry have spent more money on defense?