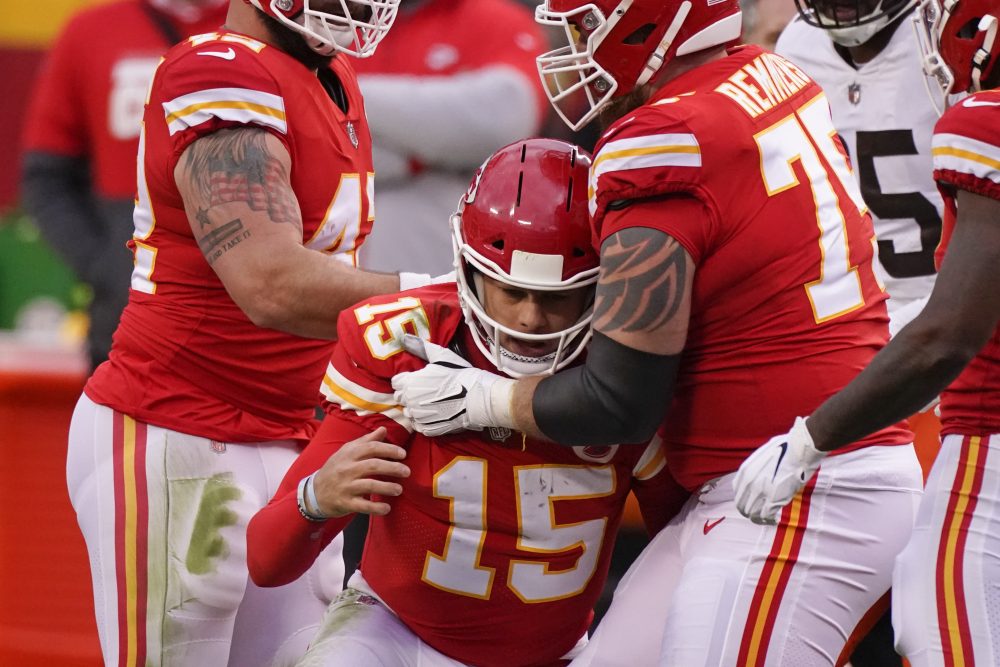 The drama surrounding the Cleveland Browns and the Kansas City Chiefs during their AFC divisional playoff matchup Sunday afternoon didn’t end after the final whistle.

Mahomes was knocked out of the game after suffering a concussion on a sweep midway through the third quarter. The 2018 NFL MVP took the shotgun snap on third-and-1, sprinted to the right side and was brought down hard by Wilson. He was wobbly when he tried to get up and need help to stand.

Mahomes spent a short time in the medical tent on the Chiefs sideline, then went to the locker room before it was announced he wouldn’t return to the game.

Garrett said he hung out several times during the offseason with Kelce, who hails from Northeast Ohio and played at Cleveland Heights High School, and considered him “a good guy.”

Kelce was significantly less inflammatory with his accusations after the game.

“This is a violent game. We wear helmets for a reason and that’s because guys are flying around trying to take your head off,” he said. “You never want to say someone purposefully tried to take you out of a game, but after the initial hit they were fired up, saying, ‘That’s what we do, that’s what we do.’

“I do feel like those guys are good and I respect a lot of them for that, especially Myles.”

Wilson also took to Twitter to defend himself, although it was unclear if the tweet was directed toward Kelce, other Kansas City players or the Chiefs fans who called the play dirty on social media.

“Never been a dirty player in my life,” Wilson tweeted. “I just try my best to play fast and make plays. Don’t try to insult me & keep the threats to yourself (with a hundred points emoji).”

Garrett made sure to wish Mahomes a speedy recovery. The Chiefs advanced to face the Buffalo Bills in the AFC championship game next weekend and Mahomes will need to clear NFL concussion protocol in order to return to the lineup.

“I’ve known Pat since we were in high school and he’s always been a great dude,” Garrett said. “I’m praying for his recovery, praying for his success. He does stuff for his community, a leader on and off the field.”

The injury was tough to take for players on both sides as Mahomes is well-liked in the league and has connections to many players.

One of those is Browns quarterback Baker Mayfield, who has crossed paths with Mahomes through their similar professional timelines. Besides playing the same position, both are featured in popular national advertising campaigns and the pair squared off in college in one of the top battles of all time, won 66-59 by Mayfield’s Oklahoma Sooners.

In that game, Mayfield threw for 545 yards and seven touchdowns, while Mahomes led Texas Tech with an FBS-record 734 passing yards and five TDs.

“Those hits are scary,” Mayfield said. “You never want to see that, especially with obviously me being extremely familiar with Pat. You just don’t want to see that. Hopefully, he is OK. Safety first, and I hope he is OK.”

Mahomes was having a big game before his injury. He completed 21 of 30 passes for 255 yards and a touchdown, finishing with a quarterback rating of 106.9. The Chiefs led 19-3 when he left the game.

Wilson and Mahomes also had a respectful exchange on Twitter after the game.

“Prayers to @PatrickMahomes . I pray you back next week! Go be great like you have been!” Wilson tweeted with folded hands (prayer) and red heart (love) emojis.