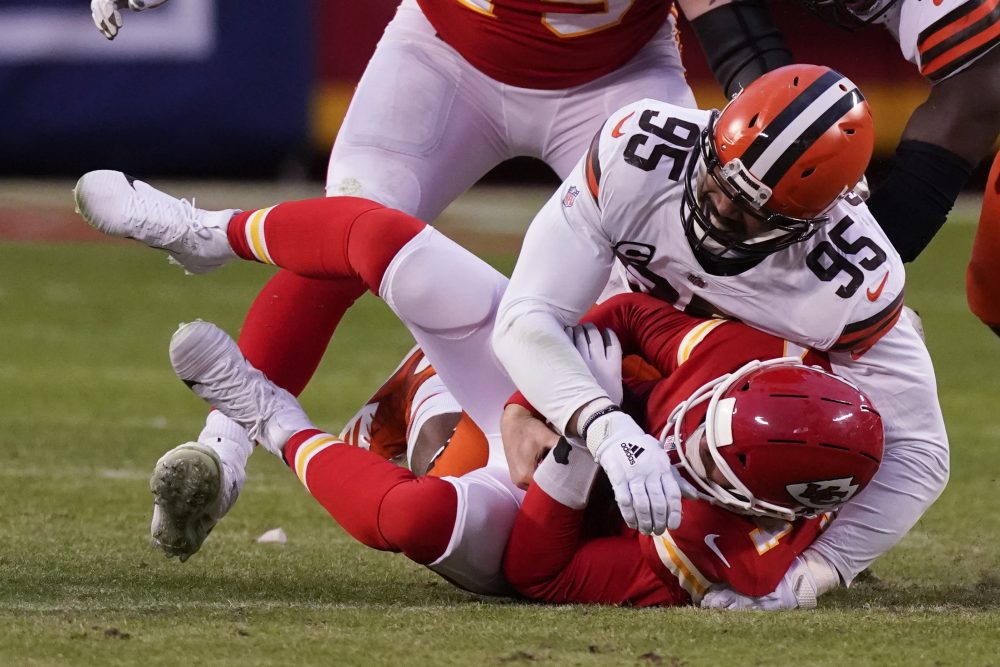 Kevin Stefanski’s playoff debut as a head coach didn’t go nearly as well as his first season in charge.

Stefanski was on the sideline Sunday in Kansas City, Mo., for the 22-17 loss to the Chiefs in the divisional round after watching the wild card win over the Steelers from his basement after testing positive for COVID-19.

“All of those decisions, that is on me,” Stefanski said. “I should have been better there. There is a cost to those when you do lose (challenges) because you lose a timeout. That is on me.”

The final decision that didn’t work was opting to punt on fourth-and-9 from the Cleveland 32-yard line with 4:19 left trailing by five. The defense allowed two first downs, and the offense never got the chance for a winning drive.

“That was probably too long there at that distance,” Stefanski said of going for it. “If it was tighter, without a doubt.”

Quarterback Baker Mayfield said he didn’t expect to go for it.

“They decided to bring a couple of pressures and made the plays, and we did not,” he said of the failures on second and third down. “By the way the game was going believed the way we handled that situation giving the ball to them and trusting our defense the way they were playing at the time to get to stop. There were a great couple of plays by (Chiefs backup quarterback Chad) Henne to convert there.”

Being down to one timeout proved costly.

Stefanski was strong all year managing the clock and avoiding wasting timeouts. But he lost one when he challenged a bobbling catch by Tyreek Hill along the Browns sideline. Cornerback Denzel Ward dislodged the ball, but Hill was able to pin it against his body before it hit the ground. Stefanski relies on someone with access to the TV replays to help with challenges but threw the flag before the replay showed a clear catch.

Stefanski was too slow to challenge a 14-yard third-quarter catch by Demarcus Robinson in which the ball hit the ground. The play came on second-and-10, and the Chiefs wound up kicking a field goal on the drive.

The last timeout preceded the first-down play that started the sequence to the final punt.

“Miscommunication,” Stefanski said. “Unfortunate, and that ultimately is on me.”

Stefanski the play caller had issues in the first half. The Browns settled for a field goal on the first drive, then self-destructed on the second.

“A bunch of drops, penalties, bad play calls and all of it,” he said. “It just was not good enough. You can’t come in here and ultimately score 17 points and get a win versus this team. That first half, I do not think that was a clean operation like we ask for.”

Defensive end Myles Garrett pulled an oblique muscle trying to make a play in the second quarter. His playing time was greatly reduced after the injury, but he still managed to make a few big plays, including a sack before the two-minute warning.

“It definitely got worse. It hurt to pick up my feet and hurt to breathe, but it is the playoffs,” he said. “It is win or go home. If I was capable of going out there and giving it all I had, I was going to do that.

“I know they started to limit my snaps, but when I was getting the chance to get out there, I was going to make it happen because I know my guys are counting on me, and I know it is the same way it is reciprocated that I am counting on them to be where they’re supposed to be.”

Garrett finished with two tackles, one for loss and two quarterback hits.

“Myles has battled for us,” Stefanski said. “He has battled through injuries all season long so not surprised he was battling through this one.”

The Browns lost two left tackles and finished the game with Blake Hance, who was signed off the Jets practice squad Jan. 2 and made his NFL debut in the wild card win vs. Pittsburgh. He was a left tackle at Northwestern but had switched to guard and center in the NFL.

Starter Jedrick Wills’ ankle was injured on the first offensive snap when a defender fell into him. Replacement Kendall Lamm’s elbow was injured in the third quarter. Wills was the No. 10 pick in April.

“It was a tough situation,” left guard Joel Bitonio said. “Jed got rolled up on pretty good and then Kendall’s elbow got hit pretty good. Blake came in again and I do not think he has played left tackle in a few years, and he was going out there and competing. That is all that we could ask him to do.”

The Browns had their starting line together for one play after Bitonio returned from missing last week on the COVID-19 list and right tackle Jack Conklin returned from a hamstring injury suffered last week in the second quarter.

“You wanted to have your five linemen out there and rolling, the guys who we came in the season as starters, but it is football,” Bitonio said.

Hance has experienced quite a whirlwind in his short time in Cleveland. Mayfield introduced himself to him in the locker room before the playoff game in Pittsburgh.

“Obviously it was going to be a big game for Jed, and then losing Kendall also sucks because he has been a guy who has stepped up time and time again for us,” Mayfield said. “Then ‘that guy named Blake’ stepped up again for us. We still had the plays to be made there, and we did not.”

ON THE BRIGHT SIDE

Receiver Jarvis Landry had a rough day, catching seven passes for only 20 yards, including a 4-yard touchdown. He dropped two, including one that was almost intercepted, and was the target on the interception when safety Tyrann Mathieu cut in front of him.

“I am proud of this group,” Landry said. “I am proud of everything that we accomplished. You want to think that there are a lot of positives, but you never want to lose a game. Our ultimate goal was to win the Super Bowl, and we did not do that.”

He remained positive about the team’s future.

“I have always been optimistic since the day I stepped foot in Cleveland,” he said. “It is Believeland, and we just have to keep believing. The right pieces will fall into place.

“We have a great team as is. If we can add guys, that can obviously help us get better in certain areas. Obviously that is not my call, but I know the guys who are here this year did a helluva job this entire year, as difficult as it was, to make it as far as we did.”

The Browns will pick No. 26 in the draft that’s scheduled to be held in Cleveland in April. That’s the lowest pick they’ve had in the first round since returning to the league in 1999, although they’ve traded out of the first round a couple of times.

** Chiefs linebacker and Clearview graduate Anthony Hitchens had four tackles, including one for loss. He’s one win away from going to his second straight Super Bowl.

** The Chiefs were without two of their top skill players, as rookie running back Clyde Edwards-Helaire (ankle/hip) and receiver Sammy Watkins (calf) were inactive.