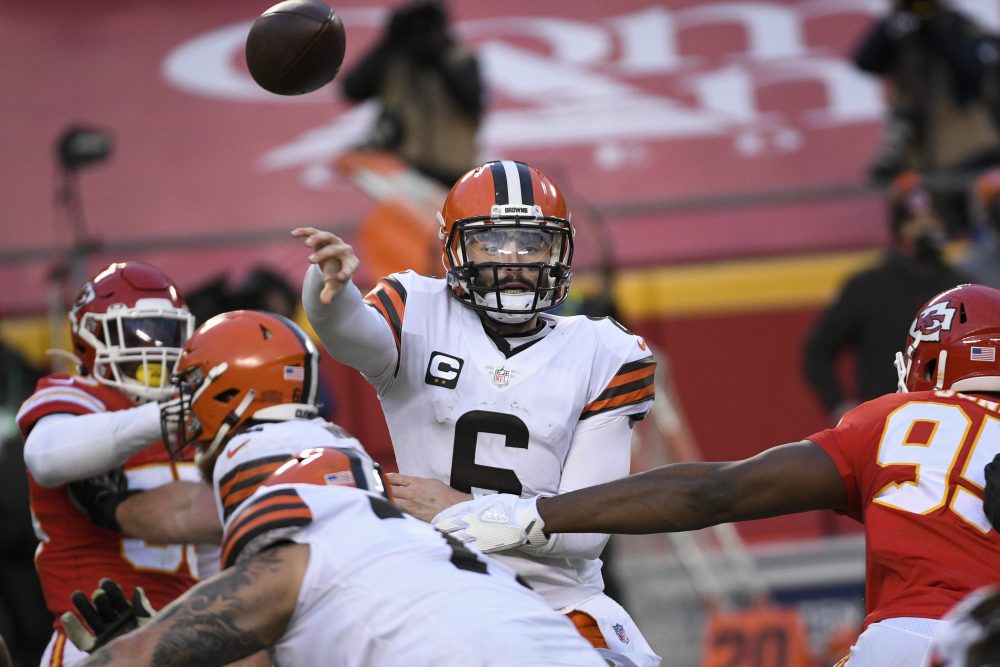 Quarterback Baker Mayfield had to rally all season, whether from a poor individual performance early in the season or leading his team to comeback wins.

So the sting of not getting the opportunity for one last rally Sunday during the 22-17 loss to the Kansas City Chiefs in the AFC divisional playoff round was particularly painful.

“It sucks, to be quite honest with you guys,” Mayfield said. “It sucks because so many people have sacrificed so much during this process and this very strange season and overcome adversity.

“It was frustrating, but that is the way these games work. Long drives, you have to take advantage of your opportunities. We did not do that today. Yeah, it is just unfortunate.”


The Browns were within striking distance thanks to several big plays by Mayfield. He completed 23 of 37 passes for 204 yards and a touchdown, and several completions came in clutch situations — he hit tight end Austin Hooper for an 11-yard gain on third-and-10 on the Browns’ opening drive, connected with Rashard Higgins for a 17-yard gain on third-and-4 in the third quarter and hit Hooper over the middle on a diving catch for 5 yards on fourth-and-3 during the fourth quarter.

Mayfield even picked up a trio of first downs with his feet, rushing for 6 yards on third-and-4 in the first quarter and converting a pair of QB sneaks.

“He fought like he always does. He rallied,” coach Kevin Stefanski said. “That is what he has done all season long steering this ship, being out in front and leading this group. I am proud of him. Ultimately, we know that we did not get the job done so there is a huge amount of disappointment in that, but I appreciate how he battles.”

Mayfield’s biggest playoff mistake came on the opening drive of the second half when he tried to thread a pass to Jarvis Landry, and safety Tyrann Mathieu stepped in front of the receiver for an interception.

“The cardinal sin of throwing late on the move over the middle,” Mayfield said. “Obviously Tyrann is a great player. Jarvis did not see him or I am sure he would have fought for it. That is the type of player he is. I said it earlier in the week, you have to know where he is.

“I will look back on that. Maybe a pump fake and run, and it is a different story, but the defense did a great job of not allowing any points and keeping us in that game in the second half.”

Mayfield pulled the Browns out of the sizable halftime deficit. Trailing 19-3, he led them on touchdown drives in the third and fourth quarters to make it 22-17, then got the ball with a chance to take the lead with eight minutes left.

Cleveland earned one first down — Mayfield diving up the middle for a 2-yard gain on fourth-and-1 — before the drive stalled on the Browns 32-yard line.

“They decided to bring a couple of pressures and made the plays, and we did not,” Mayfield said. “(I agree with) the way we handled that situation, giving the ball to them and trusting our defense the way they were playing at the time to get the stop.”

But that stop didn’t come as Kansas City and backup quarterback Chad Henne picked up a pair of first downs — the second on a 5-yard pass on fourth-and-1 — to put away the game.

“We (thought we were going to get another shot), and I think that is what hurts the most,” Mayfield said. “They went for it because I think they could feel that, too.”

Stefanski took the blame for the final stalled drive and the first-half struggles.

Mayfield continued to show leadership skills after the game, praising the players who filled the roster this season and discussing the high expectations he has for those who return next year.

“It sucks when you come up short, but you get that taste of it and realize you learned lessons,” he said. “I told some of the guys that we know for sure are going to be back that we will be back. There is a new standard here and that is to be expected. This is going to leave a bad taste in our guys’ mouth for extra motivation through the offseason but, yeah, we have come a long way since I first got here.

“We are not done yet, and that is the best part. Obviously it hurts to have to wait until next September to have to play, but it is what it is.”