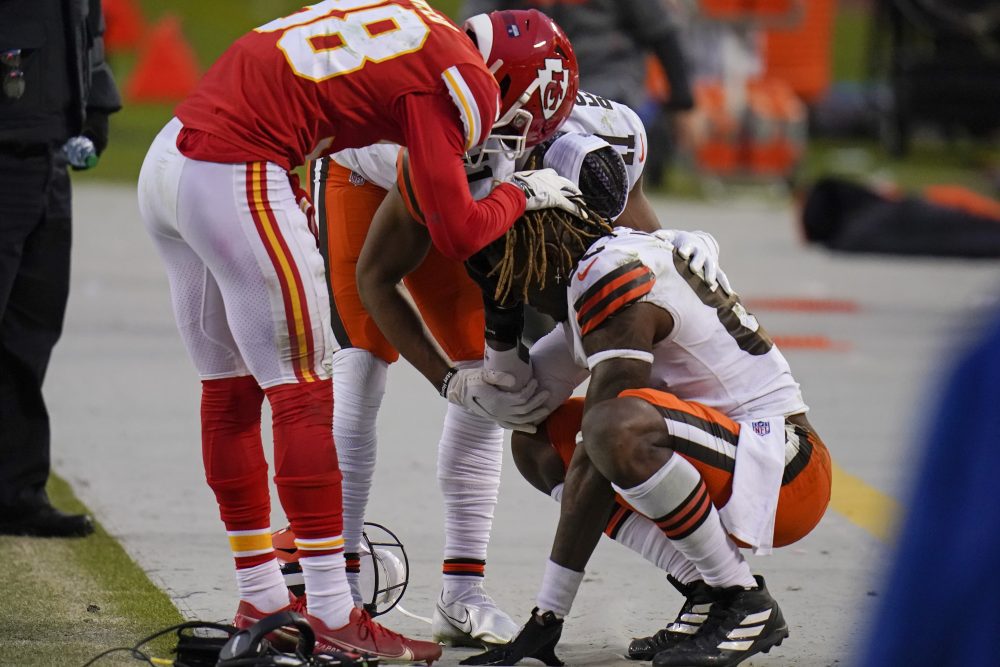 The momentum of a transformative season.

The pull of destiny.

The reality of the situation.

The powerful forces met head-on Sunday at Arrowhead Stadium. The Browns lost the collision, falling 22-17 to the Chiefs and getting bounced from the playoffs a step short of their first AFC championship game appearance since the 1989 season.

The Browns were riding high as they traveled west, fresh off a wild card win in Pittsburgh and with coach Kevin Stefanski, cornerback Denzel Ward and left guard Joel Bitonio back after missing time with COVID-19. They weren’t satisfied with making the divisional round of the playoffs for the first time since the 1994 season. They were filled with belief and expectations of reaching the Super Bowl.

The dream died when their final offensive possession ended with a 2-yard swing pass on third-and-11 and their defense gave up two first downs to journeyman backup quarterback Chad Henne.

The Browns came within a touchdown of shocking the Chiefs, which showed again the evolution of the organization and the commitment to fight regardless of the circumstances.

The Chiefs are the better team.

They’re defending Super Bowl champs, have the game’s No. 1 or No. 2 quarterback in Patrick Mahomes and matchup nightmares with receiver Tyreek Hill and tight end Travis Kelce. The Browns can’t match the trio, especially without injured receiver Odell Beckham Jr.

The Chiefs will host their third straight conference title game Sunday against the Bills, the first time that’s happened in AFC history. Andy Reid’s coached in two Super Bowls and seven conference championships. The Browns were in their second playoff game in 18 years, with Stefanski making his postseason debut.

The Browns defense needs to be fixed.

The talent in the back seven was suspect before key injuries hit. It relied on takeaways all year but got only one against the Chiefs. Then with the chance to give Baker Mayfield a final shot to win the game, it allowed Henne to scramble for 13 yards on third-and-14, then throw a game-sealing 5-yard out to Hill on fourth down.

The Browns need better depth on the defensive line and more speed in the secondary and at linebacker. Hill makes everyone look slow, but nickelbacks Kevin Johnson and M.J. Stewart Jr. had no chance when asked to keep up in single coverage. Stewart also seemed slow to react on Henne’s critical scramble.

Stefanski was criticized by some for punting on fourth-and-9 from the Cleveland 32-yard line with 4:19 left and only one timeout. His defense’s resume throughout the year would be the argument for going for it, but I don’t blame him for thinking it could get a stop against Henne, who’d never thrown a pass in the playoffs before Sunday.

The reality of the situation was too much for destiny to overcome.

That’s the uncomfortable truth of the moment, but the sting will slowly fade and the offseason will be spent talking about the incredible progress made in Stefanski’s first season.

He took an immature, underachieving 6-10 disappointment and, without an in-person offseason or a preseason, quickly transformed it into a disciplined, resilient, cohesive team. He helped Mayfield develop into an efficient winner who played like a franchise quarterback for the last half of the season.

The future is certainly bright, but the present reinforced the gap that needs to be closed between the Browns and an elite team like Kansas City.

The Chiefs offense is so dynamic, it makes opponents change styles and reconstruct game plans. The Browns are the latest example, as they slowed down the tempo and limited the number of possessions just so they could have a chance at the end.

The Browns built a balanced, efficient and, at times, explosive offense this season. But it’s not at the level of Kansas City’s.