Notes: Nick Chubb mad at self after drops, struggles in playoff loss 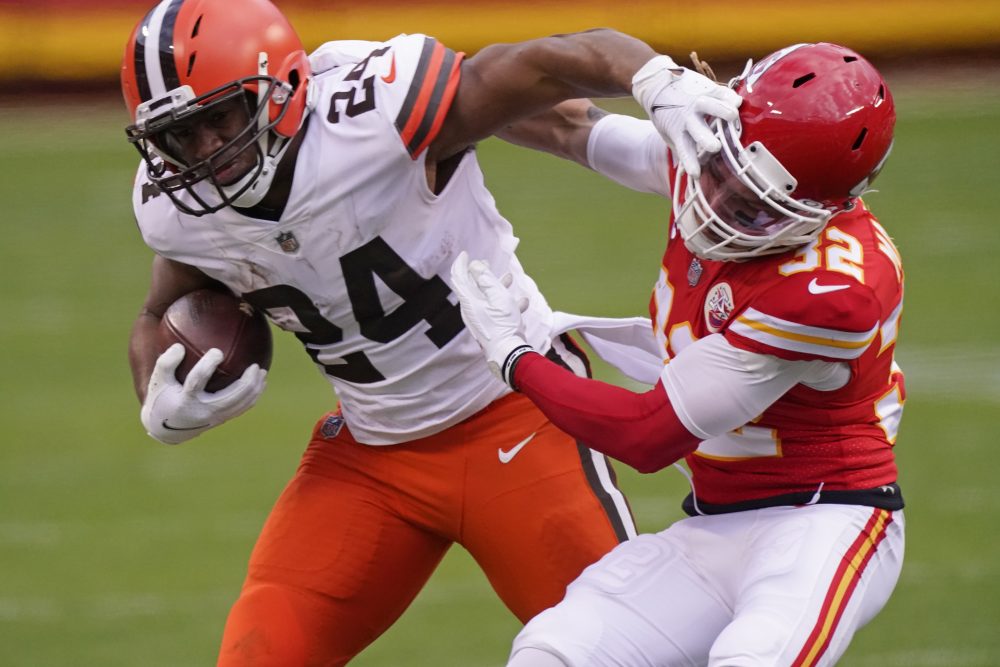 Nick Chubb was still trying Monday to get a handle on his struggles and cope with the 22-17 playoff loss to the Chiefs.

“I hold myself to a high standard of playing at a high level every game, and I did not do that yesterday,” said Chubb, who dropped three passes. “I had a couple of errors, so I am down about that, too.

“Coach, he said today that the feeling of how we feel right now, hold onto it until it can fuel us for this offseason coming up and for next year. That is what I am doing. Hold onto this feeling for a while, get back to work later and see where we are.”

Chubb was the offense’s best player this year and voted to his second straight Pro Bowl. In 12 regular-season games he rushed for 1,067 yards, a 5.6 average and 12 touchdowns.

He added 16 catches for 150 yards after devoting himself to improving his receiving skills, which made the drops Sunday that much more upsetting.

“It was tough. It did not go my way at all,” he said. “Can only learn from it. It happened.

“I am just mad at myself because that is something I worked so hard to improve on was catching the ball in the offseason, and up until yesterday it has been working for me. I can only learn from it and get back to work, and when the time comes again, be ready for it.”

The Browns struggled to get the run game going against the Chiefs, as Chubb rushed five times for 12 yards in the first half. He started the second half with rushes of 23 and 18 yards and finished with 13 carries for 69 yards and a 5.3 average.

It wasn’t enough, as the Browns couldn’t get one more touchdown.

“Really just one takeaway from the game yesterday is just in that moment, you have to make it happen,” Chubb said. “You can’t have any mistakes. Everything matters. It is win or go home. I think we understand that. Next time we get the opportunity, I hope everyone fully understands that, me included.

“We only have that one moment, one game to make it happen, and you can’t afford to have any mess-ups or mistakes. That was a great lesson learned yesterday.”

Chubb, a second-round pick in 2018, is eligible for a contract extension after finishing his third season. That’s not yet his focus.

“I am just still thinking about yesterday and not really looking forward to that stuff right now,” he said. “Just continuing to work. It will pay off for me eventually and we will see.”

Receiver Odell Beckham Jr. missed the run to the playoffs as the rehabs the surgically repaired knee that was injured Oct. 25. He tweeted during the game Sunday.

“My heart aches on that one….” he concluded.

“I know he is working really hard to get better in his rehab,” he said. “I am excited to get him back here. I know it was not easy for him being away from his teammates, especially as these games got bigger and into the playoffs. I know he definitely wanted to be a part of it.”

“I am excited about both of those guys,” Stefanski said. “Unfortunate injuries. They are just going to continue to rehab and work through those injuries. That is the exciting part for us is to get some of those guys back next season.”

Chiefs safety Daniel Sorensen won’t be suspended for the helmet-to-helmet hit that caused receiver Rashard Higgins to fumble out of the end zone for a touchback near the end of the first half, NFL Network reported. A penalty wasn’t called, but the league will review the play to see if a fine is warranted.

“I know how it was perceived, but Mack is not a dirty player,” Stefanski said. “We do not coach our guys to hurt anybody ever.

“We are all hoping and praying that Patrick is feeling OK, and we want him to be ready to go this week. I hope there are no hard feelings. I know Mack’s intent was definitely not to hurt him at all.”

Stefanski doesn’t plan to change any members of his coaching staff after going 11-5 and winning a playoff game.

“I do expect the coaching staff back next season,” he said. “Really proud of this group. They worked very, very hard in some tough circumstances. People stepped up when some of us were out. Really, I loved the way our group worked together and were very much trying to solve problems in the season as they came about.”

Several key players are set to become free agents in March, with all but Higgins on the defensive side.

Ogunjobi was a third-round pick in 2017, and Mitchell played nearly every snap this year in place of Williams.

The Browns were greeted at the airport by a number of fans.

“Our fans are incredible,” Stefanski said. “It is something that people told me about, and I got to experience it this season in a different way. I can’t wait to experience it with 67,000 strong in FirstEnergy next season.

“An incredible fan base here in the city, in Northeast Ohio and around the world. I have heard from a bunch of them. We appreciate their support. I wish we were still playing football for them.”

Garrett, left guard Joel Bitonio and right tackle Jack Conklin were voted to the All-NFL team by the Professional Football Writers of America.

** Rookie left tackle Jedrick Wills left Sunday after one snap with an ankle injury. Stefanski said he’ll need a couple of weeks of rehab but not surgery.

“Thank you @Browns. Can’t wait until next year!” Rice tweeted.

Notes: Kevin Stefanski takes blame for bad challenge, wasted timeout
Notes: Wyatt Teller says “I want to be here,” it’s important for him to get healthy in offseason