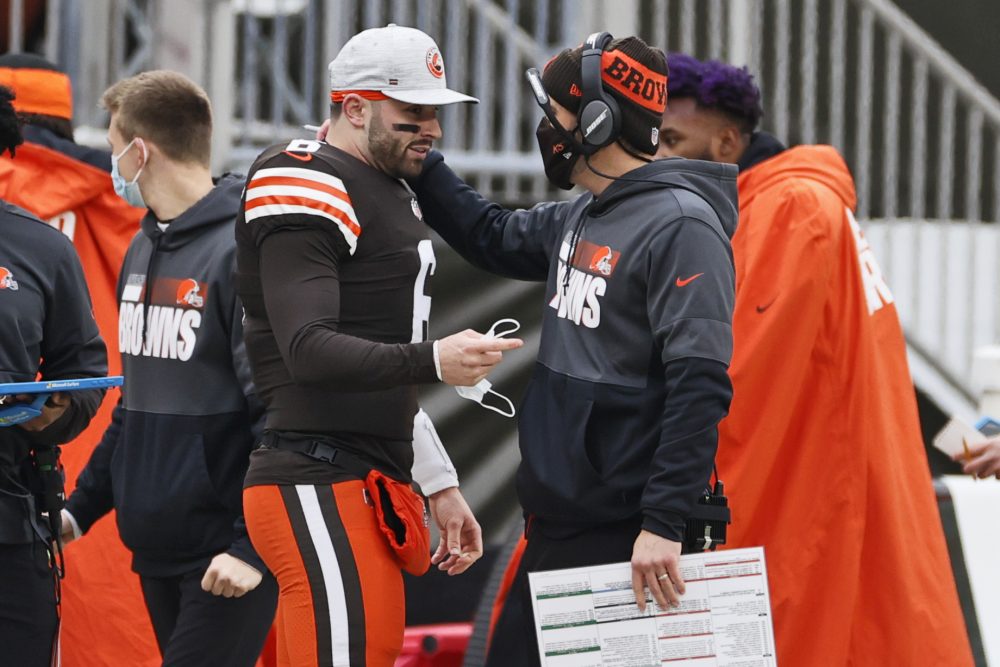 The day after a Browns season ends has typically been about coaching changes, general manager candidates and potential draft picks.

Monday was a mix of pride and disappointment.

The 22-17 loss to the Chiefs on Sunday in the divisional round of the playoffs brought an abrupt close to a year that included 11 regular-season wins and the first playoff victory in 26 years. The Browns were a play or two from knocking off the Super Bowl champs but couldn’t complete the comeback in the last eight minutes.

The loss still stung and coach Kevin Stefanski second-guessed the play calls that didn’t work on the final drive, but he also recognized the strides made by the organization in the first season with him and general manager Andrew Berry in charge.

“We definitely achieved a lot,” he said. “We did some things we set out to do, but ultimately we came up short and there is a very real sense of disappointment there among our players and coaches right now.

“We can definitely look back and see some things that we accomplished and be proud of that.”

Not only will the Browns have the same coach and GM in 2021, they’ll have the same playbook for the first time in quarterback Baker Mayfield’s fourth year.

The impressive start by Stefanski, who’s a leading candidate for NFL Coach of the Year, and the development of Mayfield are cause for celebration for an organization that had been unable to find stability in the vital roles. Center JC Tretter believes the Browns have identified the right combination.

“What Kevin has done, coming in as a first-year head coach in a year unlike any other, not having time to be in the building with the team and still shaping the culture and shaping the team the way he has, a ton of credit to him,” Tretter said. “And I think Baker showed this entire year the type of player and leader he is and that’s what you need out of the quarterback room.”

Mayfield improved in almost every statistical category from his second-year regression in 2019. He completed 62.8 percent in the regular season for 3,563 yards, 26 touchdowns, eight interceptions and a 95.9 passer rating, making a big jump after the midseason bye.

“He did a very good job taking care of the ball, just learning the system and some of the intricacies of this system, and I knew that it was going to get better over time with losing the offseason,” Stefanski said. “We saw that from Baker. Once he started getting comfortable with what we were doing and once I was using more concepts that he was comfortable with, which is a big part of this, he really started playing at a high level. I am proud of the progress he made.”

The Browns can sign Mayfield to a contract extension this offseason as it follows his third season. Berry didn’t want to discuss that last week before a playoff game but is expected to speak with reporters again this week. A big-money extension would cement Mayfield as the franchise quarterback, but Stefanski stopped short of using the label Monday.

“Baker continued to get better all season,” he said. “He did the things we asked him to do. He definitely led this football team from Day 1 until now.

“I would still tell you that these things tend to figure themselves out. We have a bunch of ballgames to look at with him and find out ways that he can get better, but in terms of the ‘franchise quarterback’ thing, I do not even know necessarily what that means. I will let Andrew answer that one.”

Berry has no doubts about Stefanski. Berry raved about him last week, and so have players all season. Stefanski established a culture of work, accountability and focus, while also installing an effective offense.

“Kevin’s personality is steady and sturdy,” Tretter said. “Kevin’s the same guy every day and he’s very laser-focused on the task at hand and he focuses on the culture of our team and what we need to be thinking about every day.”

Part of Stefanski’s parting message to the team was to use the loss to the Chiefs as fuel for the offseason. The Browns’ nucleus is young and under contract, and expectations are going to be heightened next year.

“There is still more for us out there and we are not going to stop,” running back Nick Chubb said. “We are going to continue to work harder, just keep working and see where we end up next year, but that is awhile away for now.”

Mayfield said he told players in the locker room after the loss that “we will be back,” a sentiment shared by All-Pro defensive end Myles Garrett.

“I appreciate that from the guys,” Stefanski said. “It is very hard not to be game-planning today. It is very hard for those guys not to be getting treatment and getting ready for the next one. You get into the rhythm of this season, and I think all of them really wanted to keep it going.”

Stefanski crafted the game plan to have a chance at the end against the high-powered Chiefs. The absence of Pro Bowl quarterback Patrick Mahomes, who left midway through the third quarter with a concussion, helped but the Browns were still a play or two away from advancing to the AFC championship game for the first time in 31 years.

“We came up short and did not get it done, but it was not for lack of effort. That is where I really appreciate the guys we have because you knew they were going to fight and they did, but I have to do a better job.”

The five-win improvement over 2019 and the first playoff appearance since 2002 were the biggest achievements to cherish. The disappointment came from not accomplishing the ultimate goal.

“The expectations for us will always be to play to win that last game,” Stefanski said.

Baker Mayfield frustrated by lack of final chance for comeback but tells teammates “we will be back”
Nick Chubb, Kareem Hunt look forward to more time together on field next season