Notes: Wyatt Teller says “I want to be here,” it’s important for him to get healthy in offseason 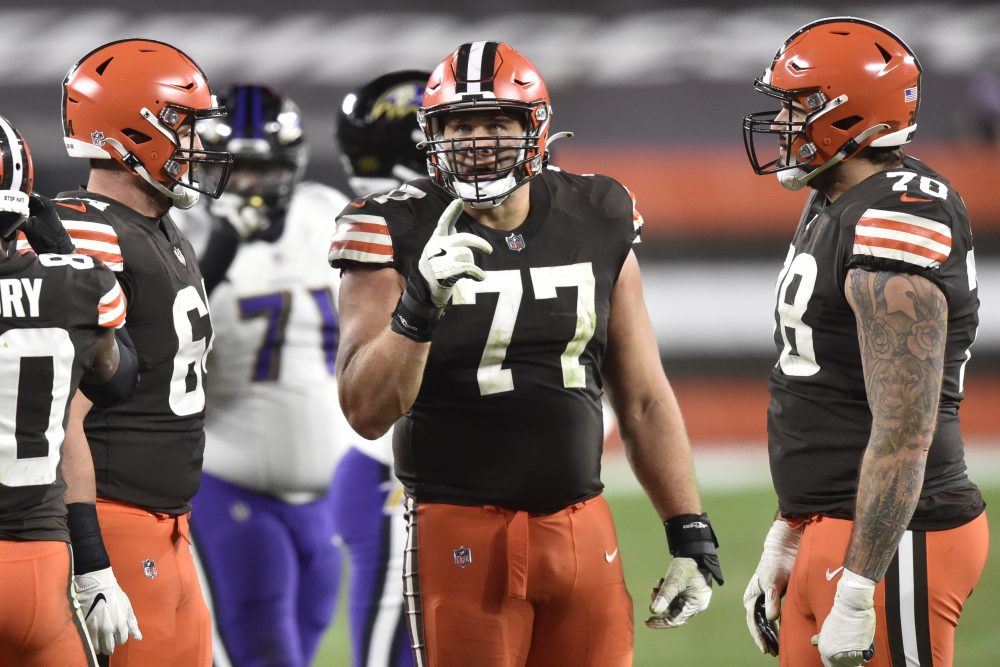 General manager Andrew Berry didn’t want to single out anyone when asked Friday which players stepped up this season but said he’d be remiss if he didn’t mention right guard Wyatt Teller.

Teller wasn’t guaranteed a starting spot when the team convened for training camp but had added 16 pounds of lean mass in the offseason, locked down the job, was selected second-team All-Pro and earned Pro Football Focus’ highest grade at guard at 92.3. Berry said Teller had a “really strong” season and worked “tirelessly” with the coaches before and after practice in camp and during the season.

All five starting linemen are under contract at least through next season. Teller is scheduled to enter the last year on his rookie contract and is one of many key players — quarterback Baker Mayfield, running back Nick Chubb, cornerback Denzel Ward — eligible for extensions this offseason.

“It is always a good thing to have your name around the building to be spoken about and stuff like that,” Teller said Tuesday. “All I can do is my job. I know that sounds cliché, but I can’t really make those decisions. I want to be here and I want to do all those things.

“I think that AB is going to be doing big things, and I think that he is a very smart guy. Right now, I think he is worried about the combine and all of this different stuff so I am going to let him focus on that. I look forward to all of that stuff and looking into next year. It is going to be a good time.”

His season would’ve been even better if he didn’t miss three games before the bye with a calf strain then two in December with a high ankle sprain.

“This is the first time I ever missed a game due to injury in 21 years, then I got injured again and it was four weeks apart,” Teller said.

He hurried back from the injuries and struggled to regain his form right away, especially in pass protection. Unfortunately, one of the examples was on the final offensive play of the season Sunday in the 22-17 divisional round playoff loss to the Chiefs. On third-and-11 with 4:31 left, Pro Bowl defensive tackle Chris Jones beat Teller and quickly pressured Mayfield, who dumped the ball to running back Kareem Hunt for a 2-yard gain. The Browns punted and never got the ball back. Hunt said Tuesday the play wasn’t designed to go to him.

“There were a lot of things, especially in this past game, that we had to go over and reflect on, and it sucks,” Teller said. “I feel like I could have played better in the last game, regardless of who it was. I know that Chris Jones is a helluva player, and those are the games you have to perform your best.

“This offseason is big on getting healthy again. I think that pass pro for me at the beginning of the season was off the charts and then it is a little nick here and a little bang there and trying to get back and get back to that fundamentals and foot fire, fast feet and all of these different things that it takes to perform at this level against these pass rushers.”

PULLING FOR THE CHIEFS

Hunt remains good friends with Chiefs quarterback Patrick Mahomes after they were drafted together by Kansas City in 2017 and is pulling for a quick recovery from the concussion he sustained Sunday midway through the third quarter.

“Prayers to my brother,” Hunt said. “I hope he is feeling all right, and I hope he has a chance to get out there again this season and play next week. You never want to see somebody go down, especially a concussion and especially the type of guy like that. I wish him the best, and I hope he gets healthy.”

Hunt talked last week of wanting bragging rights over his close friends on the Chiefs but isn’t bitter after the tough loss.

“I love those guys,” he said. “That’s a great team. They’re great players and great people out there. It doesn’t really hurt more. It’s just I really wanted to win the championship, but, hey, if anybody’s winning it, I’m happy for them.”

The Chiefs host the Bills on Sunday in the AFC championship game.

PULLING FOR THE BILLS

Teller was drafted by the Bills in the fifth round in 2018, started seven games as a rookie and was traded to the Browns before last season. He still feels connected to the Bills.

“They gave me my shot,” he said. “I understand it’s business. I kind of grew a part of that family there. I love Bills Mafia. I wish the best for ’em.

“It kinda sucks, I wish that we could be playing them, right? But that’s how it works sometimes.”

Teller said he’s texted and FaceTimed some of his former teammates, including quarterback Josh Allen.

“I’ve been sending some love and some wish for success and stuff like that,” he said.

Hunt had a simple message for receiver Rashard Higgins after his fumble Sunday inside the 1-yard line that resulted in a touchback. The play came near the end of the first half and potentially cost the Browns seven points.

“Keep your head up, man,” Hunt said. “There’s a lot of football left and go out there and keep giving it your all because it was a great play. But we’ve got to find a way to be smart, either hold onto it or get into the end zone.”

Left tackle Jedrick Wills and tight end Harrison Bryant were voted to the All-Rookie Team by the Professional Football Writers of America. Wills was the No. 10 pick and Bryant a fourth-rounder.

“Jed has all of the tools to be a really talented player in this league,” center JC Tretter said Monday.

** Running back John Kelly was signed to the reserve/futures list. He spent the season on the practice squad.