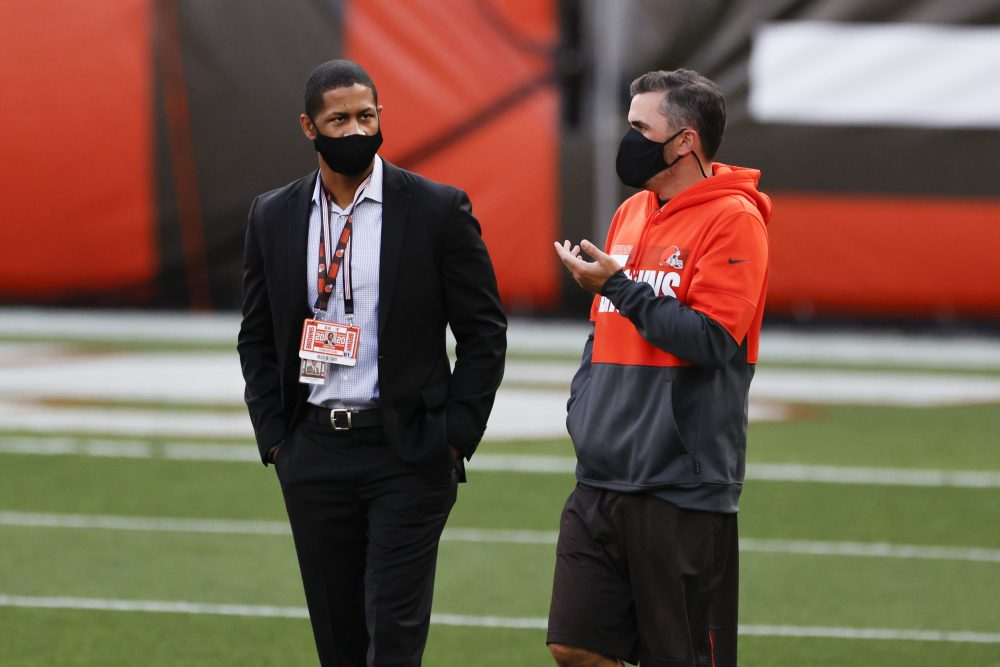 General manager Andrew Berry’s decisive and disciplined approach helped turn the Browns into a playoff team in his first year on the job.

He plans to retain the “proactive and aggressive” strategy in his second offseason, but with the realization his focus must shift. With a young, talented core, much of Berry’s attention will be spent deciding which players to sign to long-term extensions. And when it comes to free agency, most of the resources will be used to bolster a defense that lagged behind the offense.

“I talked about being aggressive a year ago, and that also pertains to the contract management side of things,” Berry said Wednesday in a season wrapup news conference on Zoom.

His goal of bringing the Browns their first Super Bowl victory certainly seems more attainable after they returned to the playoffs for the first time since 2002 and won in the postseason for the first time in 26 years. But the 22-17 loss to the Chiefs in the divisional round of the playoffs Sunday showed there’s work left to be done.

“Ultimately we were unable to make the critical plays in big moments that would allow us to advance,” Berry said. “It certainly gives us something to aspire to as we enter the offseason. It certainly does not take away from what the group was able to accomplish throughout the season.”

Berry declined to discuss specifics on many topics, including a potential contract extension for quarterback Baker Mayfield, but he spoke in general terms about organizational philosophies and the ability to improve the roster despite an expected sharp decline in the salary cap given the revenue reductions because of the pandemic.

“I think we will have plenty of flexibility regardless of how any of that shakes out,” he said. “I am really encouraged of what we will be able to do this offseason.

“Our goal is to develop as deep of a roster as possible and to have as many high-quality players as possible.”

Berry believes in signing players to extensions with a year or two left on their rookie deals. The list of candidates this offseason includes Mayfield, running back Nick Chubb, cornerback Denzel Ward and right guard Wyatt Teller.

Berry acknowledged the uncertain salary cap affects “sequencing and timing” of contracts and player acquisition but said they’re well-positioned to lock up their players for the long term and add free agents. The Browns are expected to have almost $24 million in cap space if it is set at the floor of $175 million, according to overthecap.com.

“I do not think the cap or really anything would preclude us from making any long-term commitments in any phase,” Berry said. “I would like to keep as many of our good players as long as possible. That is probably the easiest way to say it. Those guys are highly skilled at what they do, and they are great people.”

Position and profile will mean Mayfield’s contract situation receives most of the attention once the league year starts in March.

Berry wouldn’t say whether he plans to pick up the fifth-year option on Mayfield’s rookie contract by May, or try to sign him to an extension. He couldn’t say enough good things about his development.

“I think you guys know me well enough at this point that in terms of contracts I don’t think that this is really the appropriate forum to really talk about those decisions,” Berry said. “I think that that’s something that’s a little more personal to me, the player and the agent.

“What I can tell you is really I’d echo the comments I had last week with Baker. I think he did an excellent job this year, right? He led us to the first playoff appearance in eons. He got 12 wins, played winning football all year, developed a really strong relationship with Kevin (Stefanski, coach) and the offensive staff and really grew before our eyes on a week-to-week basis both on and off the field. We’re very, very pleased with him. Look, we wouldn’t be where we were at the end of the season without his performance. He had a really strong season.”

Because he hasn’t made a Pro Bowl in his first three seasons, the fifth-year option for Mayfield, the No. 1 pick in 2018, is expected to be around $20 million for 2022. It would be guaranteed under the new collective bargaining agreement reached last year.

Stefanski has also been complimentary of Mayfield’s development, especially as he got comfortable in Stefanski’s system as the year progressed. But Stefanski stopped short of calling him a franchise quarterback Monday.

“Baker continued to get better all season,” he said. “He did the things we asked him to do. He definitely led this football team from Day 1 until now.

“I would still tell you that these things tend to figure themselves out. We have a bunch of ballgames to look at with him and find out ways that he can get better, but in terms of the ‘franchise quarterback’ thing, I do not even know necessarily what that means.”

The Browns were in a similar situation with defensive end Myles Garrett last year after his third season and signed him to a five-year, $125 million extension in July.

“Obviously we did his deal in the summer, but it is not something that I really felt comfortable talking through really into the offseason,” Berry said. “I just do not think it is the right forum. We are very pleased with Baker.”

With the expected return of receiver Odell Beckham Jr. from knee surgery, the Browns would bring back the entire starting lineup on offense in 2021. The same isn’t true on defense, with end Olivier Vernon, tackle Larry Ogunjobi, linebacker B.J. Goodson and cornerback Terrance Mitchell scheduled to become free agents.

“Understand that obviously we think we can certainly boost the defense as we go into 2021,” Berry said. “It is probably too early to make any declarative or definitive statements, but certainly understand the strengths and weaknesses of the team.”