Mailbag: Why didn’t Kareem Hunt get ball earlier against KC? Will Browns be a pass-heavy team in 2021? Should Andrew Berry have spent more money on defense? 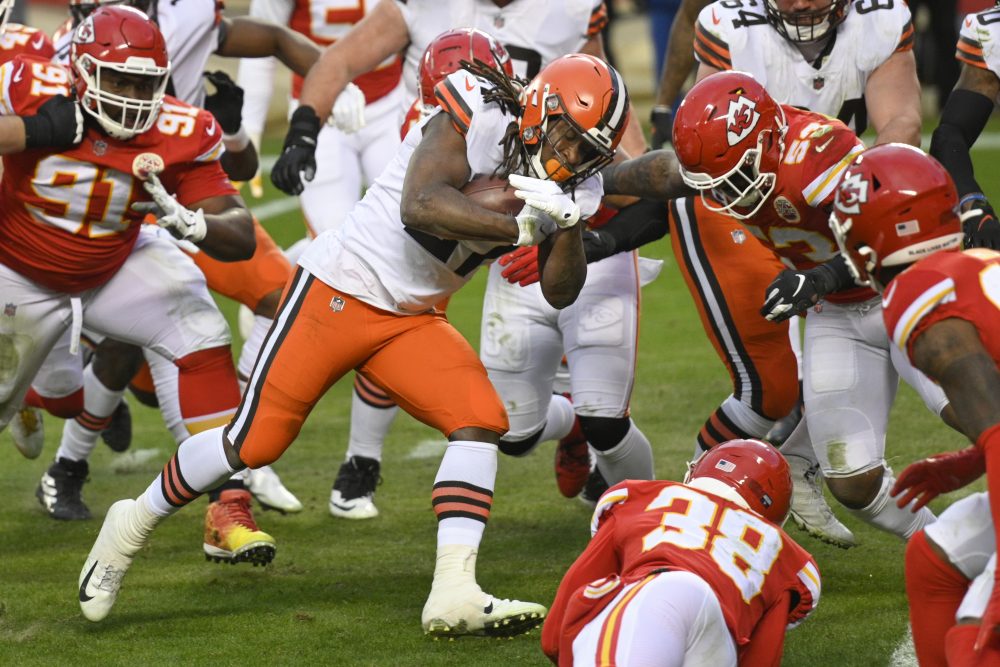 Q: Scott, the biggest question I have that puzzles me about the Chiefs loss is why didn’t coach Kevin Stefanski run Kareem Hunt in the first half?? I think if he had done that we might be playing Buffalo this week. Coach Stefanski does not seem to want to talk about it. Thought?

A: I was surprised by the lack of Hunt touches in the first half given his history with the Chiefs and the buildup before the game. But Nick Chubb is the No. 1 back and got only five carries in the first half as the Browns had just three possessions and couldn’t get much going in the run game. So I don’t fault Stefanski for not forcing the action with Hunt just because he was drafted by the Chiefs.

While I don’t have a big problem with Hunt’s lack of opportunities early, I don’t think Stefanski had his best game as a play caller. I think the Chiefs defense was better than expected, and the early injury to left tackle Jedrick Wills affected Stefanski’s comfort calling certain plays. The Browns had to settle for a field goal on their first drive, then had to punt on their last possession of the game. Each call mattered, and too many of Stefanski’s didn’t meet his normal level of excellence.

Q: Any indication that Stefanski will delegate play calling next year? What do you think he should do?

A: Not really. The original plan for 2020 was to have coordinator Alex Van Pelt try calling plays in the preseason, but the games were canceled so Stefanski kept the job for himself. I think there’s a chance Stefanski could give Van Pelt a shot next year, but after the offense performed so well and Stefanski was able to handle the dual roles of play caller and game manager, I don’t see any reason to mess with what worked.

Q:
From the Tennessee game on, the Browns were a much more pass-heavy team than a run-heavy team. Do you think this will continue to be the identity of the Browns going forward?

A: I just think that’s the way of the NFL. Life for an offense is so much easier with explosive plays, and those come more often in the passing game.

Stefanski was adamant he’ll adjust the game plan depending on the opponent and situation, so he could rely on the run game one week and the pass game the next. To him, that’s more important than a 50-50 balance within a game. He’ll never abandon the run and knows it’s a critical element to the play-action game that’s a staple of his system but he also realizes the importance of a dynamic pass game. So getting back to your question, I’d expect more passing than running overall but not a complete change in identity. For what it’s worth, they finished the season with 501 passes and 495 runs.

I also must mention that defenses concentrated more on stopping the run after the Odell Beckham Jr. injury, which forced Stefanski to turn to the pass. If Beckham returns and defenses adjust, the run game could again step to the forefront.

Q: Second guessing Browns management has become a survival mechanism for loyal Browns fans these last 20 years, so with the caveat that I’m amazed with the great job Andrew Berry did this season, I still cannot resist to ask: Had the Browns known before the season that they would come within a whisper of beating the Chiefs in the divisional round of the playoffs, might they have leaned forward and spent even a small fraction of the $30M in salary cap space they left on the 2020 table?

A: An interesting question. While Berry insisted reaching the divisional round didn’t exceed his expectations — they’re always aiming for the Super Bowl — I’m a little skeptical. The Browns had a new coach, a quarterback coming off a bad year, a rookie left tackle and no preseason to get ready, so 11-5 and a playoff win had to surprise Berry at some level. So I completely get your question. Needing to make one more play to beat the Chiefs and reach the AFC championship game, another defender would’ve been huge.

Having said this, I think Berry and DePodesta have a long-term plan and are delighted with the team’s development. While they may have had momentary pangs of regret, I don’t think they would’ve done anything differently.

Q: Do you think Andrew Berry will try to get extra draft picks, beyond the picks from the Eagles and Rams this year? Not having a combine will hurt evaluations, but not as much as the lessened college season we just had. This could be the more bites at the apple theory.

A: I think Berry will always try to get extra picks in a draft. He and chief strategy officer Paul DePodesta are big believers in your apple theory. They realize the draft is a crapshoot and that the chances for success increase with the number of picks. I can’t guarantee they’ll add to the large pile they already have in 2021 by trading down but could certainly see them stockpiling picks for 2022 just to maintain a level of flexibility.

Berry doesn’t agree that the lack of the scouting combine and the shortened college season will negatively impact the draft process. He said everyone’s used to doing things remotely and the team will have enough information on the players available.

Q: What are the chances of the Browns obtaining compensatory picks in the upcoming draft? The Browns signed several free agents last year on one-year deals. Does this help?

A: First of all, the compensatory picks to be awarded for the 2021 draft are based on the free agent gains and losses in 2020. So I don’t expect the Browns to receive any compensatory picks. They signed Jack Conklin and Austin Hooper as well as a number of guys on defense, while linebacker Joe Schobert was the most notable loss in free agency. So the formula won’t help the Browns in the upcoming draft.

The picks for 2022 will be determined by if and how the Browns offset the losses of all the free agents set to leave.

Q: What free agents and draft picks would you like to see the Browns go after to shore up the defense and possibly add speed at the wide receiver position?

A: I’m going to give you both the same answer: I need more time. The Browns’ success and their playoff run robbed me of my usual head start on the draft and free agency.

I do know this: Defensive end and cornerback will be at the top of my list when I look for candidates. Speed at receiver is less of a necessity if Beckham returns, as I expect, but even with Beckham I’d like to see the Browns find someone with short-area quickness to play in the slot and add another dimension to the passing game.

Mailbag: How does this season compare to playoff runs of the 1980s? When will Baker Mayfield get extension? How many touches for Nick Chubb vs. Chiefs?
Mailbag: How can Browns avoid being in same QB position as Rams, Eagles? Which defenders should be re-signed? What was most impressive win of regular season?