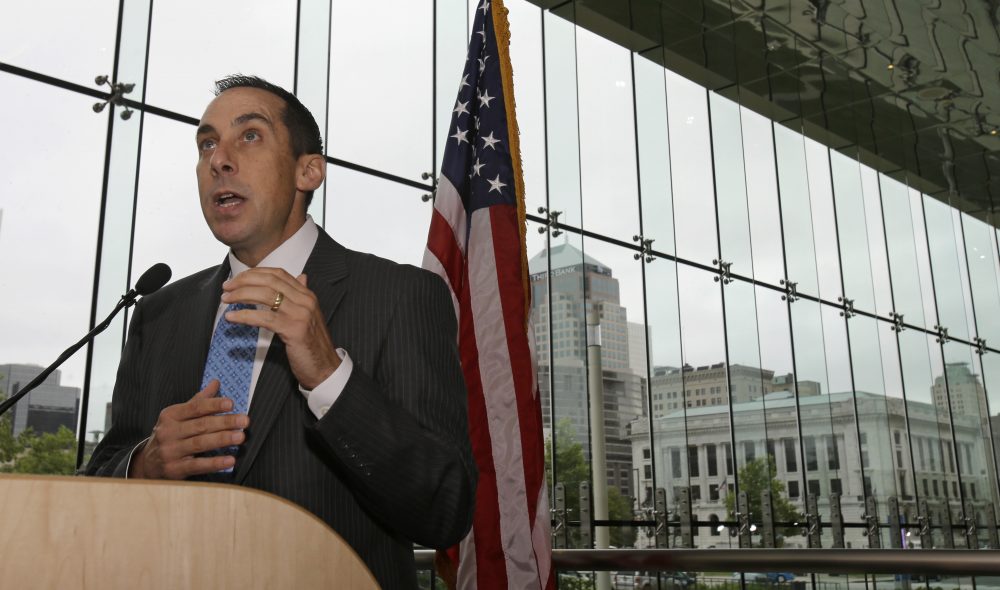 Browns fans traditionally start dreaming about the NFL Draft in the fall as the losses pile up. Eleven regular-season wins and the first trip to the playoffs in 18 years kept the focus on the present this season.

David Gilbert is one fan who never stopped thinking of the draft even as the Browns put together their best season in 26 years, including a playoff win in Pittsburgh. As longtime president and CEO of the Greater Cleveland Sports Commission, he’s in charge of hosting the NFL Draft scheduled for April 29-May 1 along the lakefront.

The draft was held completely virtually in 2020 as the nation was locked down due to COVID-19. With fewer than three months before this year’s edition, all parties are full speed ahead in preparing for a live event in Cleveland despite the pandemic continuing to rage.

“It is certainly their intent to have a large, live draft here,” Gilbert said of the NFL during a phone interview Wednesday with The Chronicle-Telegram.

He shares the enthusiasm.

“Honestly we’re feeling good,” he said. “I think there is an absolute, all-out effort and desire to make this work. And make it work safely.

“But the fact that we are in a pandemic just is a reality that hangs over everything that we’re looking to do.”

The NFL didn’t miss a game during the season, which will conclude Sunday with the Super Bowl in Tampa, Fla. It believes it can stage a safe draft.

“The NFL will work with the City of Cleveland to jointly create comprehensive COVID plans to ensure a safe and enjoyable event for fans, personnel and the public,” league spokesman Brian McCarthy wrote to The Chronicle in an email. “The NFL is working on Super Bowl LV with strong COVID safety protocols in place, including social distancing and face coverings at all on-site events. The NFL is in constant communication with the Host Committee, City and state officials, NFL medical personnel, and the CDC. We will incorporate learnings from the previous season and the Super Bowl into our Draft plans.”

Gilbert has had discussions with the state health department and is confident the safety plan will be approved, especially after the NFL gains experience at the Super Bowl. The three-day extravaganza, which includes the NFL Experience and other activities besides the announcement of the selections, will look different than the elbow-to-elbow scenes from Nashville, Tenn., in 2019 when more than 100,000 people attended each day.

The planning contains a lot more volatility due to the pandemic, Gilbert said, but the events will remain free and outdoors at locations along the lakefront, including FirstEnergy Stadium. The large footprint will permit people to spread out, and Gilbert envisions timed ticketing to control the number of people admitted into a certain space to allow for social distancing. He remains confident it will be fun for local fans and visitors, showcase the city and benefit restaurants and hotels that have struggled during the pandemic.

“One of the things we’ve thought a lot about is you have so many small businesses, in particular restaurants, hotels and others that rely on visitors, that are struggling to survive through COVID,” he said. “Having a live draft, even if it’s a fraction of the size, it could still be the shot in the arm that many of these businesses need to make it through whatever it may be, midsummer, later summer, early fall that we start to feel the lifting of COVID. On a comparative basis, you could make a case that a draft that still brings in lots of people but a fraction of what it might otherwise have been could be in odd ways more impactful than if this was two years ago or two years from now. What we know is no matter what, it’s going to be a very impactful event for Cleveland.”

One that shines a spotlight on the city.

“This is an event that last year was watched by 55 million viewers over the course of the three days,” Gilbert said. “And what the NFL does is really amazing in terms of making the broadcast of the event really have a feel of the essence of that community. I think no matter what, that national, worldwide television audience is going to see Cleveland in an incredible light.”

“Obviously in a COVID world, we have no idea how much smaller but it will be smaller,” he said.

He still expects significant numbers given 14 of the 31 other NFL teams are within about an eight-hour drive. The Jets (No. 2), Bengals (No. 5), Eagles (No. 6) and Lions (No. 7) hold high picks that should excite their fans.

A staple of the draft is Commissioner Roger Goodell announcing the first-round selections and welcoming many of the players to the league with a hug on the giant stage. A fist or elbow bump may replace the embrace, but Gilbert expects Goodell and some players to be part of the festivities.

“Presumably yes. The NFL has an awful lot to consider,” Gilbert said. “It’s absolutely the safety of all the fans, but it is also very much the safety of the players in the draft and everybody else associated. All of those things have to be taken into consideration and everybody has to feel that the plans are as tight as possible to make sure that everyone is safe.”

The sports commission has partnered with the Browns, who are celebrating their 75th anniversary, to host the draft and they’re still finalizing exact locations around the stadium and North Coast Harbor for the list of activities. If circumstances with the virus change and the NFL goes virtual, Cleveland would hope to be quickly awarded another draft, like Las Vegas, which was bumped from 2020 to 2022.

“It’s incredible,” Gilbert said of the opportunity. “Clevelanders should appreciate that we won the rights to host this. It wasn’t just somebody’s turn, it wasn’t a dart thrown at a map of NFL teams happened to land on Cleveland. We were chosen among a lot of others that wanted it, and it’s because they loved what they saw in our community, our experience, what we brought to the table, the community’s passion around football, all those things.”

The strangeness of the times includes the Browns not drafting until No. 26 after picking in the top 10 seven times since 2012. The fans’ enthusiasm will come from the selection of new talent, as well as the joy of the 2020 season and the expectations of future success.

“I think just the excitement about the Browns in general is that much higher,” Gilbert said. “And I think probably far outweighs any loss in the anticipation of the pick being a much lower first-round pick.”