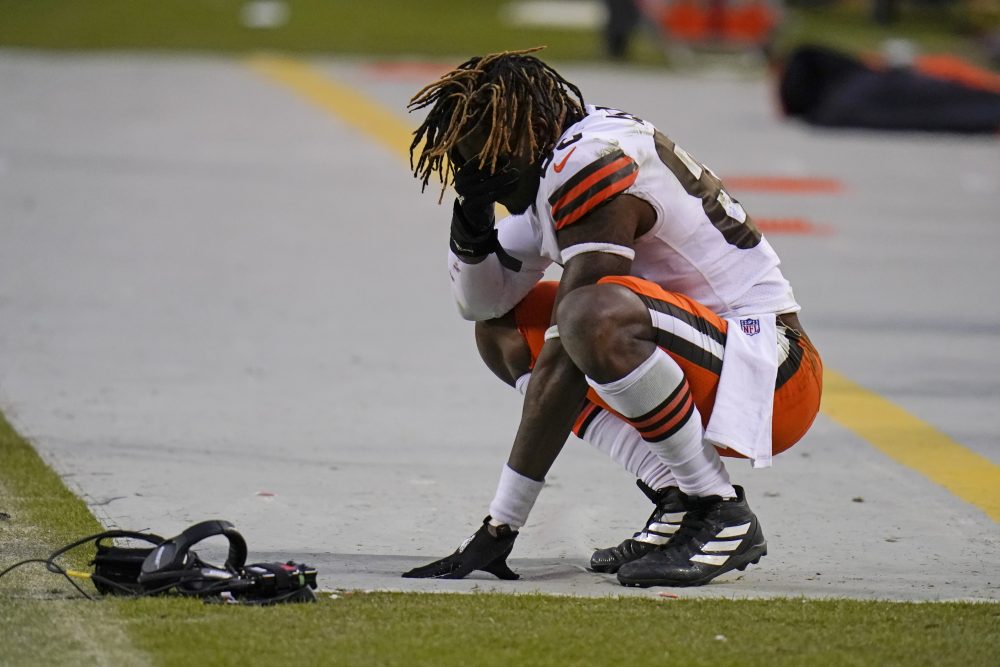 Tight end David Njoku remains noncommittal about a future with the Browns and sounds as if he could renew his request to be traded.

“That’s a good question,” Njoku said Friday on the “Jim Rome Show” when asked if he’s in the right spot. “I’m not going to answer that right now. I have no comment towards that at this moment. I’m just going to enjoy my family, my friends, my loved ones. I have a couple of projects happening in the near future, so I’m just focused on the right now and let everything handle itself in the near future.”

Njoku originally requested a trade in July, but general manager Andrew Berry had no intention of moving him. Njoku’s camp reissued the request in October, according to Cleveland.com, but he wasn’t dealt and finished the season.

He’s due to make $6 million in 2021 after the Browns picked up the fifth-year option on his rookie contract in May. He’s then scheduled to be a free agent after the 2021 season.

The discontent started when the Browns signed tight end Austin Hooper to a four-year, $42 million contract in March to leave the Falcons, then drafted Harrison Bryant in the fourth round. Njoku, the No. 29 pick in 2017, didn’t know how to take the upgrades at his position.

“Mind you, before I say anything, Austin is one of my best friends right now,” said Njoku, who’s planning to travel to Nigeria in the offseason to donate $15,000-$20,000 worth of food, water and essentials. “Just this past few months that we’ve hung out, that guy and I, we’ve been through a lot and we’ve trained together a lot. That’s someone who I call a real close friend of mine. Harrison as well. He’s very, very innocent dude, just got drafted, he has his whole life ahead of him. I’m very excited to see how his career plays out. He’s a phenomenal athlete. Those two guys I have much respect for.”

But their additions were unsettling.

“I was confused because the Browns (exercised) my fifth-year option and they got all of these other tight ends,” Njoku said. “At the same time, I’d been hearing (coach) Kevin Stefanski’s offense is very tight end-oriented. So I was optimistic about everything. I was excited to get back to work. With a couple of complications obviously here and there throughout the season, it put me in a predicament where I had nothing to do but just put my head down and work.”

Njoku caught 19 passes (seventh on the team) for 213 yards and two touchdowns in 13 regular-season games, including five starts. He’s the most physically gifted of the tight ends and played 33.9 percent of the snaps as the Browns used a ton of two- and three-tight end sets.

Hooper caught 46 passes for 435 yards and four touchdowns while playing 59.5 percent of the snaps. Bryant caught 24 passes for 238 yards and three TDs in 55.6 percent.

“Last year was definitely a roller coaster for me,” Njoku said. “It was an interesting year, another year of growth. I learned a lot about myself. I pushed through adversity, physical and mental.

Njoku’s best game was the 22-17 loss to the Chiefs in the divisional round of the playoffs. He tied a season high with four catches for a season-high 49 yards.

He was crushed after the loss. He stayed on the sideline with his hand over his face and was consoled by teammates and opponents. It could be the final image of him in a Browns uniform if he talks his way out of town or the Browns decide $6 million is too much to pay for a rotational tight end.

“Earlier in the season, we weren’t really on the same page, the Browns and I,” Njoku said. “We were trying to figure things out, trying to make sure both parties were happy and it was just very complicated. This game is very political.

“Obviously, if it was just X’s and O’s and straight football, it would be a lot clearer. But there are complications and there are gray areas and things happen and it’s tough. And it’s also tough to pick yourself up when things aren’t really going your way.”

NFL Draft in Cleveland remains on as scheduled, with “absolute, all-out effort and desire” to make it work despite pandemic
Kevin Stefanski named AP NFL Coach of Year to cap impressive first season