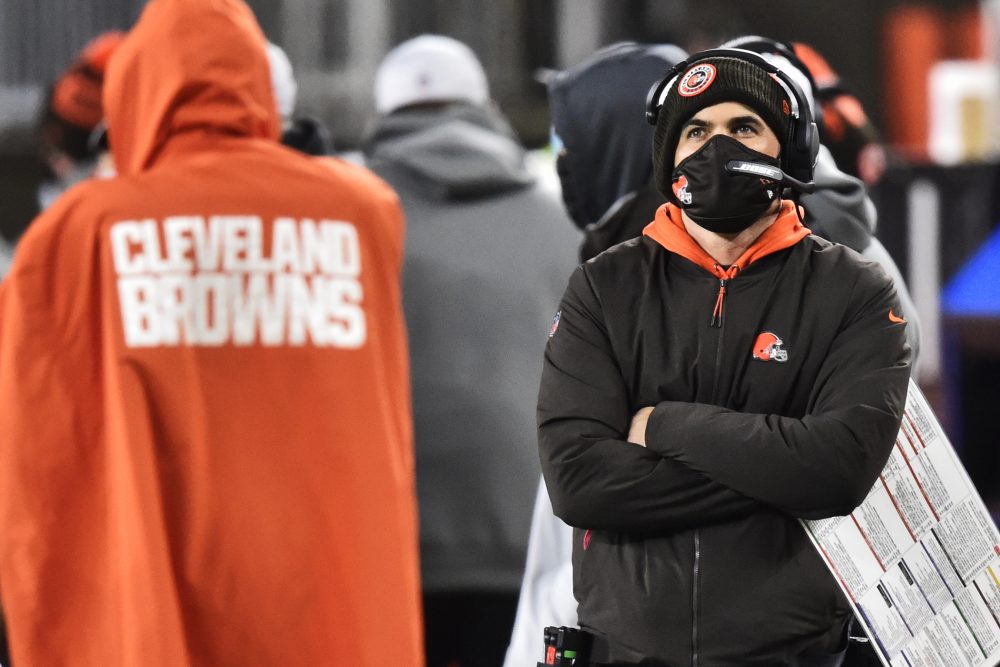 The challenges started when Kevin Stefanski accepted the job in January 2020 as the fifth Browns coach since 2013. They didn’t stop during the first NFL season played in a pandemic.

He conquered them all.

Stefanski’s achievements were recognized Saturday night when he was named The Associated Press’ NFL Coach of the Year. Forrest Gregg in 1976 was the only other Browns coach to win the award.

Stefanski, in his first season as a head coach, led the Browns to their first playoff appearance since 2002. Their wild card win over the Steelers, which Stefanski watched from his basement after testing positive for COVID-19, was Cleveland’s first in the postseason in 26 years.

“I’m incredibly humbled, especially given some of the coaching we’ve witnessed this season around the NFL,” Stefanski said in a video showed during the NFL Honors show. “My name may be on this award but I think this speaks to the amazing support I get day in and day out from my coaching staff with the Cleveland Browns. I’m very glad I don’t have to do this by myself.

“Then the players — it helps to have good players. I appreciate how they work every single day, week in and week out and how they fought. I appreciate that from those guys.”

“My name may be on this award but I think this speaks to the amazing support I get day in and day out from my coaching staff with the Cleveland Browns.”

Stefanski, 38, was hired a year after finishing runner-up in the search that led to Freddie Kitchens getting the job. At his introductory news conference Stefanski declared himself “undeterred” and “undaunted” despite Kitchens being the fifth coach fired by owners Jimmy and Dee Haslam since they agreed to buy the team in 2012.

“Kevin is more than deserving of this award as he has consistently messaged and embodied a team-first approach in everything he does,” the Haslams said in a news release. “While Kevin will most certainly downplay his personal contributions, his steady demeanor and servant leadership have been and will continue to be incredibly impactful for our football team and entire organization. We are proud to have Kevin as our head coach and this honor reflects his and our team’s collective accomplishments.”

The Browns’ last AP award winner was Chip Banks as Defensive Rookie of the Year in 1982. Stefanski was also named Coach of the Year by the Professional Football Writers of America.

He received 25 of the 50 first-place AP votes.  Buffalo’s Sean McDermott was second with seven, and Miami’s Brian Flores got six.

.@Browns head coach Kevin Stefanski is the 2020 Coach of the Year! (by @Bose) #NFLHonors pic.twitter.com/Gtod4mGRkx

Stefanski’s success is more impressive in light of the circumstances of the season. The NFL went virtual in March, so he didn’t meet the majority of his players until training camp in late July and didn’t have a preseason. He then dealt with missing players on the COVID reserve list, disrupted and adjusted practice schedules and a positive test himself.

He kept the players focused despite all the hardships.

“For him to be a first-time head coach, no real offseason and navigating the challenges of an NFL season amid a global pandemic, it’s remarkable,” general manager Andrew Berry said. “His poise, his ability to handle adversity and ultimately lead our team through adversity the entire year, whether it was a loss, injuries, having players, coaches, staff out for COVID-related reasons, he never lost his cool, he never lost his poise. It obviously showed with the on-field results.”

His unflappable nature was evident early, as the Browns lost 38-6 in Baltimore in his first game. He didn’t overreact, and the Browns won the next four. They didn’t lose two straight all year and added another four-game win streak.

His fingerprints were all over the offense as play caller. The 408 points were second in franchise history, and the 148.4 rushing yards a game were third in the league and the most for the Browns since 1978. Quarterback Baker Mayfield’s passer rating jumped from 78.8 in 2019 to 95.9, and his interceptions dropped from 21 to eight, including only two in the final 11 games.

“You think about what he had to endure through the course of this year. Ultimately he didn’t just endure — he thrived,” chief strategy officer Paul DePodesta said of Stefanski.