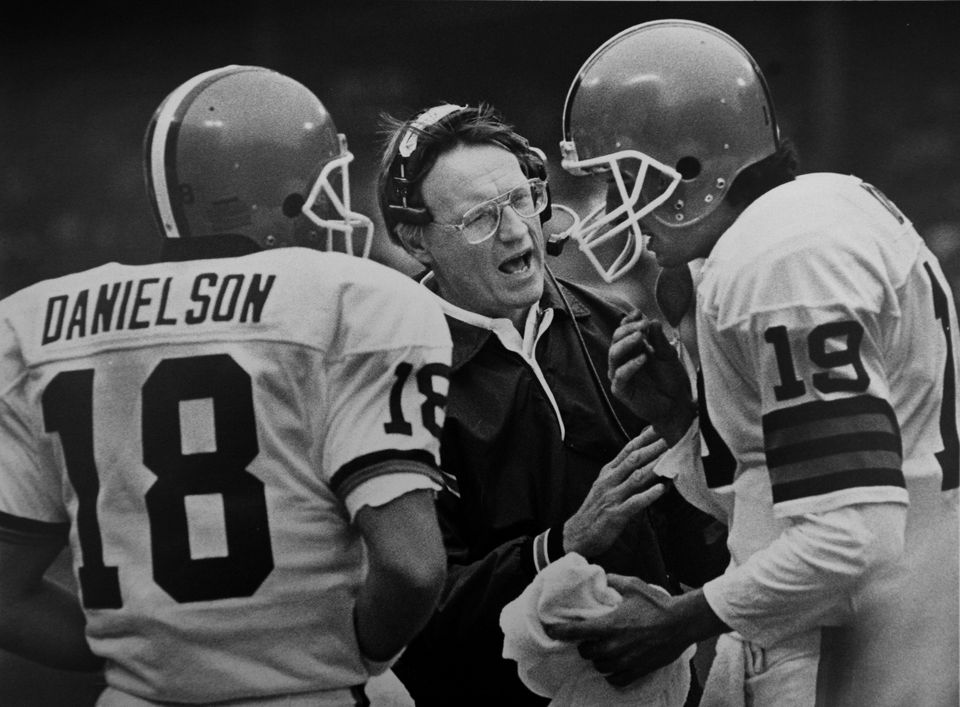 Marty Schottenheimer was head coach in Cleveland for only 4½ years but did more than most to stoke a passion for the Browns that couldn’t be extinguished by three years without football and two decades of dysfunction and defeat and was finally rekindled this season.

Any Browns fan born before 1980 but too young to remember the 1964 NFL Championship was forged by the Schottenheimer teams of the second half of the 1980s. The Browns reached the playoffs in all four of his full seasons — Paul Brown is the only other coach in franchise history with four straight playoff appearances — won three AFC Central Division titles and made the AFC championship game after the 1986 and ’87 seasons.

Quarterback Bernie Kosar gets much of the love for the run, given his Northeast Ohio roots and continued presence in the area, but Schottenheimer was the driving force with his discipline, preparation, teaching and inspiration.

“There’s a gleam” instantly conjures an image of Schottenheimer in his oversized glasses motivating his players in the franchise’s most recent glory years.

Schottenheimer died Monday night at age 77. He battled Alzheimer’s for years and entered hospice in North Carolina on Jan. 30.

“Coach Marty Thank U For All You’ve Done & Ment In Mine & So Many of Our Lives,” Kosar tweeted Tuesday. “U Will Be Greatly Missed For The Luv Of The Game. U Matter”

Schottenheimer went 200-126-1 in the regular season as coach of the Browns, Chiefs, Washington and Chargers. He lost a handful of playoff heartbreakers that denied him the chance to win the elusive Super Bowl, including The Drive and The Fumble games in Cleveland’s AFC title losses to the Broncos.

The painful near-misses continued in his time with the Chiefs and the Chargers and are part of his legacy. He went 5-13 in the playoffs, the only losing record of the eight coaches with 200 wins.

It’s unfair to judge Schottenheimer by the playoff record. One man, even the one in charge, can only do so much.

He couldn’t run the route for receiver Webster Slaughter, who was supposed to take Broncos cornerback Jeremiah Castille to the corner of the end zone on the play that became The Fumble. Slaughter’s sloppy execution and early anticipation of a touchdown allowed Castille to strip Earnest Byner before the end zone in the 1987 title game loss in Denver.

Coach Marty Thank U For All You’ve Done & Ment In Mine & So Many of Our Lives U Will Be Greatly Missed 🏈For The Luv Of The Game 🙏🏼U Matter pic.twitter.com/7eHLbDq0Pp

NFL Films did a wonderful job capturing the career and essence of Schottenheimer in its “A Football Life” documentary released in 2013. I watched it again Tuesday but didn’t need a reminder of how Schottenheimer’s final NFL game ended.

The Chargers went 14-2 in 2006 and hosted Tom Brady, Bill Belichick and the New England Patriots in the playoffs. San Diego’s Marlon McCree intercepted Brady with about six minutes left and the Chargers leading 21-13 but fumbled as he tried to return it. The Patriots recovered, tied the game and eventually won 24-21.

“Make sure now when you get the interception at the end of the game that wins it, you just go down on the ground and the hell with all that running around, all right,” Schottenheimer said.

“Marty was the most detail-oriented coach I’ve ever been around,” Tony Dungy said in the documentary.

Dungy was on Schottenheimer’s staff with the Chiefs and went on to become a Hall of Fame coach. Bill Cowher played and coached for Schottenheimer in Cleveland and was also elected to the Hall.

“Marty, you always said, “There’s a gleam, men!” It’s true, and that gleam is, and always was, YOU,” Cowher tweeted. “Rest in peace Coach, love you.”

Schottenheimer coached with the toughness of a middle linebacker, the position he played with Buffalo and Boston. His style earned the moniker “Martyball” as he would wear down opponents with a relentless running game and stout defense.

But his players revered him as much for his soft side. He’d tear up at the drop of a hat and his pregame speeches could be corny but he was never afraid to share his emotions.

“#ForTheLoveof Marty.” Byner tweeted. “Blessing for the Life you gave me and the lives you caused to be better.”

Schottenheimer took over for the fired Sam Rutigliano during the 1984 season but wouldn’t accept the interim tag originally offered by owner Art Modell. Schottenheimer wound up with a three-year contract, then parted ways with the Browns after the 1988 season when Modell demanded he make coaching changes. Schottenheimer was a man of conviction. He left Washington after a season when owner Daniel Snyder tried to take away control of personnel.

Schottenheimer never made it to the Super Bowl but refused to be defined by the hole in his resume. He had too much to celebrate.

“I think the worst thing anybody can do is spend time worrying about something that they missed out on,” he said in the documentary. “Disappointment? Sure. But I never let it consume me.”