Mailbag: Would Cleveland be better off hosting the draft in a different year? Who’s up first for an extension? What would it take to get J.J. Watt? 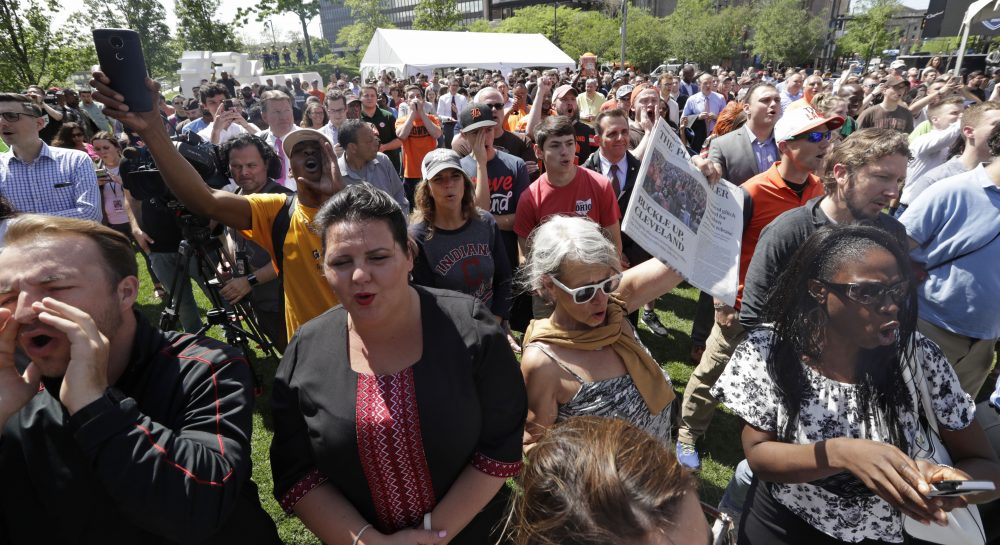 Q: I thoroughly enjoyed last year’s virtual draft, so why the push to have a half-hearted and sparsely attended draft here this year? The virus will not be gone and everyone will not be close to vaccinated by the end of April, so why take the chance? If it is delayed, we could be in line for a draft in a few years, but if they go through with it this year, it will be a long time until Cleveland could have another draft. Wouldn’t it be a smarter economic move for the city to ask to push it back?

A: I have to admit I was surprised by how optimistic Greater Cleveland Sports Commission president and CEO David Gilbert and the NFL were when I talked to them last week about holding the draft. They’re preparing full speed ahead for a live draft April 29-May 1 on the lakefront.

But I’m with you. I don’t understand the rush to hold an event that can work virtually while the country still deals with the pandemic. So let me try to answer your series of questions, in order.

It seems to me the push to hold the draft in Cleveland is to further establish a sense of normalcy and not have to bump Cleveland’s year into the future. Cities line up to compete to get a chance to host, and the NFL doesn’t want to be backed up two years, as it would owe Las Vegas and Cleveland.

I don’t have a good answer for why the NFL would take the medical chance by having the draft. The league held an altered version of the Super Bowl in Tampa, Fla., and was going to use the experience as a guide for safely having the draft. Maybe the decision-makers will think twice after too many pictures and stories of Tampa being overrun with people not wearing masks or social distancing.

In answer to your final question, if I were Gilbert, I would want my first chance to host the draft to come in a non-pandemic year. Attendance will be down, so money will be down for the city and its businesses. If the NFL could guarantee Cleveland would have the draft in 2023, I’d take that in a heartbeat. It just doesn’t sound like the NFL is willing to go that route.

Q:
Will the Browns sign Baker Mayfield, Nick Chubb or Denzel Ward to contract extensions this offseason? Which one of these three?

A: I’d be stunned if at least one extension doesn’t get done and expect two.

I’d start with Mayfield and believe the Browns will. Not only is quarterback the most important position, it’s the highest paid. So by locking in Mayfield to a long-term deal, the team’s salary cap picture would come into sharper focus. As long as Mayfield wants to be in Cleveland — there are a lot of restless quarterbacks around the NFL these days — I think it’s in the organization’s best interest to finalize an extension as soon as possible.

Chubb would be my next priority. As a second-round pick, his rookie contract doesn’t have a fifth-year option and he’s eligible for free agency after the 2021 season. Running back is a tricky position when it comes to second contracts, but Chubb is such a good player and hard worker that signing him to an extension makes sense. The front office could choose to keep him through the franchise tag, but the right long-term deal makes more sense for everyone.

As for Ward, when healthy he plays like a Pro Bowler. I expect the Browns to eventually sign him to an extension, but there’s less rush given the fifth-year option and perhaps a desire to see if he can stay healthy for a whole season.

Q: What do you think of the J.J. Watt/Richard Sherman rumors, and do you believe the Browns front office would spend the money necessary to sign older players like these two?

A: I love the idea of signing a future Hall of Famer who can still play at a high level. That type of addition would be huge for a young team trying to take the next step or two in the playoffs.

Watt interests me more than Sherman. I think Watt can still play at a Pro Bowl level and would be the perfect complement to Myles Garrett at end. Watt would also be a great influence with his work ethic. The Browns’ biggest need is defensive end, and Watt might be the most attractive option.

As for Sherman, he’s turning 33 in March and is a year older than Watt. Age is much more of a concern at corner, where speed and quickness mean so much. Coordinator Joe Woods knows Sherman from their year together with the 49ers, so if the film shows Sherman has gas left in the tank, he’d be a good fit. He’s a proven winner who could mentor Ward, Greedy Williams and Grant Delpit in the secondary.

Money is always an issue, but I believe general manager Andrew Berry would pay for the right veteran.

Q: Scott, what would it take for the Browns to pry J.J. Watt away from the Texans?

He’s due $17.5 million in 2021, the last year of his contract. The Texans are in disarray, have a new coach and GM and seem open to parting with the best player in franchise history. If the Texans don’t want to pay him and he doesn’t want to play there, the team doesn’t have much leverage. I can envision a scenario in which the Texans cut him, but think it’s more likely multiple teams express interest in a trade. I think the Browns could get him for a third-round pick, as long as they’re willing to pay the salary or renegotiate a multiyear deal.

Q: Of the Browns’ free agents, who do you feel they should bring back and who do you think they will bring back?

A: I don’t think any of the free agents are musts to bring back, but there are some I think the Browns should try to keep.

My list starts with cornerbacks Terrance Mitchell and Kevin Johnson. Mitchell exceeded expectations after being forced to start all season after Williams’ shoulder injury, and Johnson has the versatility to play in the slot and outside. I doubt the Browns will bring back both — they expect Williams to be healthy and will likely sign a cornerback in free agency or draft one early — but depth is critical at the position and both have proved they can play in Woods’ system. Mitchell would be my choice to re-sign, but Johnson will be cheaper.

My next target would be receiver Rashard Higgins. I don’t value Higgins as much as many people do, but I can’t deny his chemistry with Mayfield. I certainly wouldn’t overpay to keep Higgins, but if he were willing to return on a two-year, $10 million contract, I’d do it. I’d hesitate if he demanded four years and more than $24 million, which is what spotrac.com predicts as his market value.

Middle linebacker B.J. Goodson and safety Karl Joseph signed one-year deals last year and showed they fit in the system and locker room. Goodson far exceeded expectations and would provide value at a position still young and in flux. Joseph could be the third safety with Delpit and Ronnie Harrison. Both should come cheap and are worth trying to re-sign.

I love defensive tackle Larry Ogunjobi and think he’s a valuable asset on a championship team, but the Browns aren’t going to pay the $9 million or $10 million a year he will command on the open market.

I’d also take a flyer on defensive end Olivier Vernon. He had nine sacks and is a force against the run but is 30 years old and his Achilles tendon ruptured in the regular-season finale. He’d be well worth the risk on a cheap one-year deal.

As for whom I expect the Browns to keep, there are too many variables to know for sure, but here’s a stab: Johnson, Higgins, Joseph, Lamm and Taylor.

Q: Ozzie Newsome was voted into the Pro Football Hall of Fame after his career as a Browns tight end. Newsome also had a remarkable career as an NFL executive from which he recently retired. My understanding is the Hall only allows one enshrinement per person, which feels more than a bit ironic given the owners’ ongoing struggles with the Rooney Rule. Why doesn’t the NFL allow a separate Hall of Fame entry for what is a completely different achievement?

A: It’s an interesting topic. A quick look at the men in the Pro Football Hall of Fame shows there isn’t a need. Nobody has the dual resume of Newsome — worthy of the Hall as a player and again as a coach or executive. Mike Ditka and John Elway deserve discussion, but neither had the sustained success of Newsome. Then there’s his impact as a racial groundbreaker as a personnel man.

I don’t see any push from the Hall to change its policies but am certainly open to the idea of recognizing Newsome a second time.

Mailbag: How can Browns avoid being in same QB position as Rams, Eagles? Which defenders should be re-signed? What was most impressive win of regular season?
Mailbag: Will the Browns land J.J. Watt? Did playoff win over Steelers show depth of Kevin Stefanski’s leadership? Is safety Justin Simmons a target?