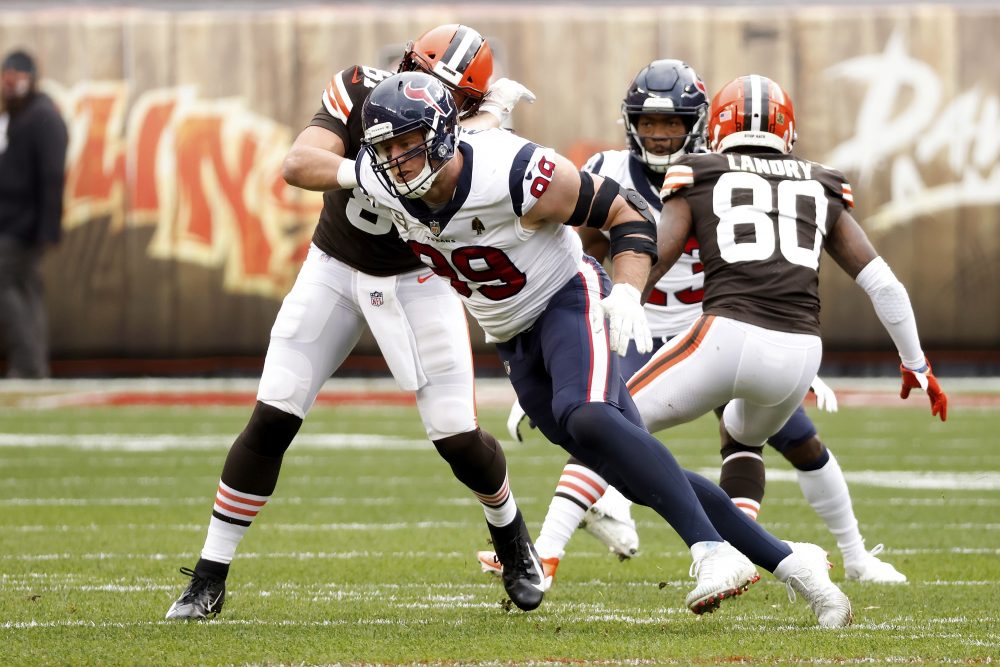 The free agent market will be loaded with big-name players.

Many of those players would improve the Browns.

None more than Watt.


The Browns reportedly expressed interest in Watt on Friday after he asked for and was given his release by the Houston Texans after 10 seasons. ESPN reported approximately a dozen teams quickly reached out.

The aggressive Andrew Berry would’ve been negligent in his general manager duties if he didn’t make a run at Watt. Berry should make landing him his top offseason priority.

The Browns will enter 2021 as a Super Bowl contender after reaching the divisional round in January for the first time in 26 years. They can’t take the jump without a significant upgrade on defense, starting with an edge rusher to put on the opposite side of All-Pro Myles Garrett.

Not only was he the best defensive player of the last decade — he was NFL Defensive Player of the Year in 2012, ’14 and ’15, joining Lawrence Taylor and Aaron Donald as the only three-time winners in league history — he brings a work ethic, tenacity and drive that would rub off on Garrett and the rest of the relatively young roster. Watt’s the type of person who can lift an organization to new levels.

The perfect bookend for Garrett can rush the passer and stop the run. Olivier Vernon came on in the second half of the season to finish with nine sacks and was always stout setting the edge, but his Achilles tendon ruptured in the finale and he’s a free agent.

Watt is a much more talented and dynamic version of Vernon.

He remains a feared pass rusher and powerful vs. the run as he gets ready to turn 32 in March. Watt had only five sacks in 2020 but was double-teamed more than any edge rusher in the league, according to ESPN, on an inept Texans defense. With Garrett on the other side, opponents would have to choose between devoting extra resources to stop Garrett or Watt. The other would be left to feast.

Watt (6-foot-5, 288 pounds), who has the versatility to rush from the inside, could provide the push that allows Garrett to realize his goal of Defensive Player of the Year. Watt had 17 quarterback hits, 14 tackles for loss and seven pass defensed in 2020, as Pro Football Focus graded him seventh in the NFL among edge defenders. Garrett was sixth.

Houston, I wanted you to hear this directly from me… pic.twitter.com/YqT3P6Lb6l

There are three reasons to think twice about signing Watt — age, injury history and expected salary.

Although he played every game in 2020, he missed 32 among 2016, ’17 and ’19. But his Hall of Fame resume that includes five All-Pro selections and two seasons with 20.5 sacks allows him to ask for top dollar. He was due to make $17.5 million in 2021 in the last year of his contract with the Texans, so he’ll likely want a similar salary on a multiyear deal.

That shouldn’t stop Berry. He should start with a two-year, $30 million offer and be flexible.

Watt’s age probably makes him a short-term solution, but if he avoids serious injury, he’s got at least two years left of premium performance. Reggie White had double-digit sacks in three seasons after turning 32, and Bruce Smith did it five times.

The lack of a long-term future might scare some fans, who would prefer the Browns go after Cincinnati’s Carl Lawson, Baltimore’s Yannick Ngakoue, New Orleans’ Trey Hendrickson or the Chargers’ Melvin Ingram, who are eligible to hit the market in March. I understand that but prefer Watt, who would also be a great role model for a rookie end the Browns could draft as early as No. 26 in April.

The Texans granting Watt’s release made him available immediately and gave him complete control over where he signs. Watt’s been connected to the Steelers, where brothers T.J. and Derek play, and the Packers after growing up in Wisconsin.

Maybe Watt isn’t open to signing with the Browns. If he is, viewing them as a legitimate Super Bowl contender, Berry should put on the full-court press to close the deal.

He should do his best to get it done.

Commentary: Marty Schottenheimer was the force behind the 1980s teams that provided so much joy, so many thrills
Commentary: For once, QB quandary is not part of Browns’ vocabulary