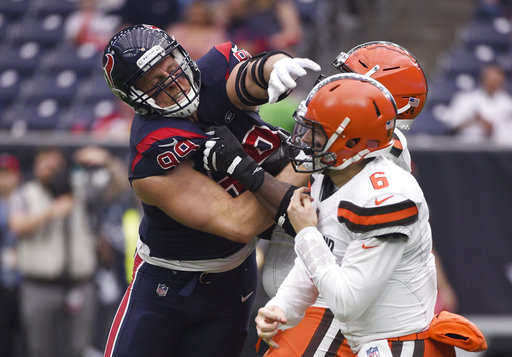 As I wrote over the weekend, I believe general manager Andrew Berry should make signing Watt his top offseason priority. I think Watt would have an incredible impact on the Browns and make them legitimate Super Bowl contenders as the biggest step in overhauling the defense.

While I expect the Browns to be in the mix, there are too many contending teams to predict Watt will choose Cleveland. He has family ties with the Steelers, grew up in Wisconsin and dreamed of playing for the Packers and is on the wish list of just about every team with Super Bowl aspirations. For reference, SportsBetting.com installed the Packers as a 3-to-2 favorite to sign him, followed by the Steelers (2-to-1), Cowboys (4-to-1), Rams (5-to-1), Raiders (8-to-1), Bears (10-to-1) and Broncos (10-to-1) before the Browns, Buccaneers, Ravens and Bills at 12-to-1.

I’m not ruling out the Browns, I just think odds are Watt lands elsewhere. My money would be on Green Bay.

Q:
Was the best clue into coach Kevin Stefanski’s effectiveness as a leader when our Browns won the Steelers playoff game without him on the sideline? Would you agree most NFL teams would have struggled far more in that situation?

A: Maybe I’m splitting hairs or parsing the language, but I think the 48-37 victory at Heinz Field in the wild card round speaks more to the system and culture Stefanski established in his first season rather than his leadership.

We saw his outstanding leadership throughout the season, starting with the ability to navigate the challenges of a totally virtual offseason and build chemistry at the same time. It continued early in the season when he got the team to rebound from lopsided losses in Baltimore and Pittsburgh. It was evident in the progress made by quarterback Baker Mayfield, especially after the bye week. It showed every time COVID-19 forced the team to miss practice or play without a key contributor.

The transformative playoff victory over the Steelers certainly reflected Stefanski’s leadership. I just think it was about so much more. The fact that the organization didn’t panic without its coach, some assistants and a couple of top players — left guard Joel Bitonio and cornerback Denzel Ward — then executed the game plan in prime time in a stadium where the Browns had lost 17 straight games revealed just how much Stefanski had changed the culture. His fingerprints were all over the win despite him watching from his basement 140 miles away. The coaches and players knew how to play “Browns football” without him, and that’s a huge testament to Stefanski.

And I would certainly agree that many, if not most, teams would struggle in the same situation. I could be wrong, but I have a hard time picturing the Patriots, Steelers or Rams, just to name a few, having the same success without Bill Belichick, Mike Tomlin or Sean McVay.

Q: Do the Browns go after Simmons?

I’m torn about Simmons and the Browns. That has nothing to do with Simmons as a player, only the team’s safety situation.

I thought Simmons would’ve been a great fit for the Browns last offseason, but the Broncos used the franchise tag to keep him. He’s scheduled to be a free agent again this March and would be a popular target if he makes it to the open market. He has nine interceptions over the last two seasons, and I was really impressed when I studied him before the Browns’ trip to Denver in 2019.

With Grant Delpit expected back from a ruptured Achilles tendon and Ronnie Harrison returning for a second season, I’m not convinced the Browns will dedicate big money to adding a third safety. I know coordinator Joe Woods wanted to use more three-safety sets in 2020, but a high-priced free agent doesn’t seem necessary after drafting Delpit in the second round in 2020 and trading for Harrison.

Q: Why didn’t A.J. Green see more playing time last year? Not NFL ready? Also, at their current level of play is J.J. Watt that much of an improvement over Olivier Vernon? Trying for a twofer.

A: It’s difficult for an undrafted rookie cornerback to break into the rotation. It’s that much harder without a normal offseason and no preseason games. I know Green had some buzz after the Browns reportedly paid him a guaranteed $145,000 signing bonus to secure him, but he wasn’t ready to make an impact on defense. This was reinforced when he didn’t see the field — one defensive snap all year — despite injuries and COVID absences. The coaches used Tavierre Thomas, M.J. Stewart Jr. and Robert Jackson ahead of him.

I’m feeling generous, so you get your twofer.

I do think Watt would be a significant improvement over Vernon, and that’s no knock on Vernon. He’s stout against the run and came on to finish with nine sacks. I just think Watt’s playmaking ability is at another level and could see him getting 15 sacks if paired with Myles Garrett. I also think he’s a force of personality, something the subdued Vernon isn’t.

Q: Regarding Marvin Hall (4.28 40), given our burner need that could have helped open up the field for Baker vs. KC, why wasn’t he active/used? I realize he’d only been on the team a month, but does it really take that much practice to run fly routes? Anything would have helped.

A:  I had the same thought well before the loss to the Chiefs in the playoffs. After the season-ending injury to Odell Beckham Jr., the Browns lacked a true speed threat and the ability to stretch the field. Berry realized this and claimed Hall on Dec. 7 to see if he could provide that, but the coaches never seemed to reach a level of trust. Hall’s only action was against the Jets when the top four receivers were on the COVID reserve list as high-risk close contacts.

I assume he either didn’t reach a comfort level with the offense, or the coaches thought he was too one-dimensional to have an impact. At 5-10, 190 pounds, he’s limited in what he can do, especially as a blocker in the run game, so his presence in the huddle might reveal too much to the defense.

I’m convinced the Browns should keep Beckham. Even if they do, they need to add variety at receiver. They could definitely use a quick slot receiver who can create separation underneath and maybe another speed threat on the outside.

Mailbag: Would Cleveland be better off hosting the draft in a different year? Who’s up first for an extension? What would it take to get J.J. Watt?
Mailbag: How does league-high carryover affect Browns’ salary cap space? Can fans count on Kevin Stefanski for long haul? What about trading Odell Beckham Jr. to Packers?