With 10 title games, 7 championships, Otto Graham deserves to be mentioned with Tom Brady in discussion of Greatest of All Time 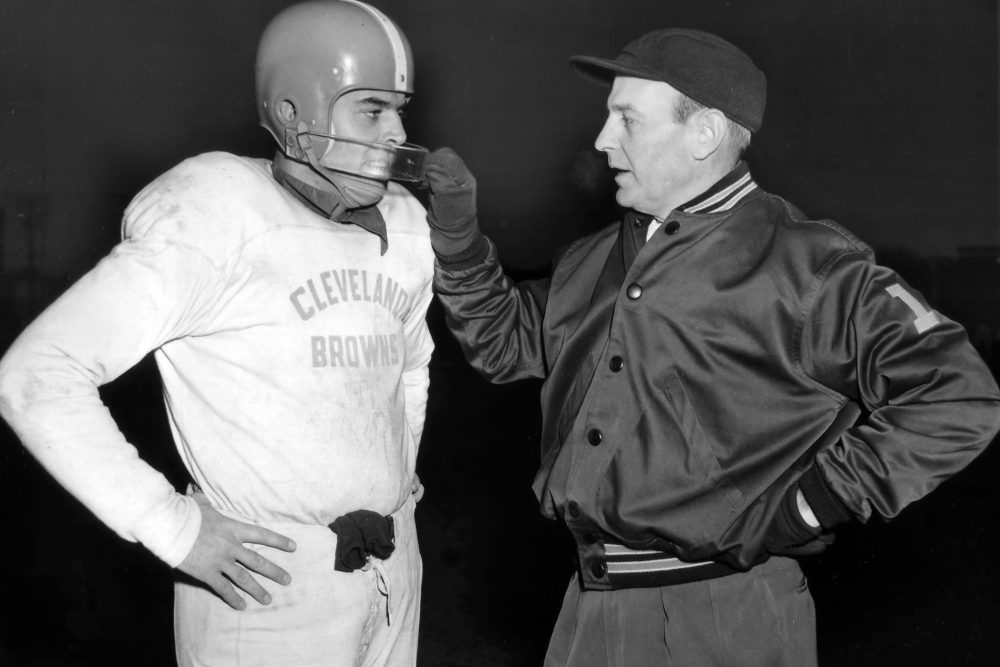 He has competition when it comes to the greatest winner in professional football history.

Otto Graham played in 10 league championship games in 10 seasons as quarterback of the Browns and won seven titles before retiring. Brady matched Graham on Feb. 7 when the Buccaneers beat the Chiefs 31-9 in Super Bowl LV, but he needed 21 seasons to do what Graham did in 10.

“Otto shouldn’t be overlooked just because of when it was,” Bengals owner Mike Brown told The Chronicle-Telegram in a phone interview Tuesday. “He was a real winner.”


Brown is uniquely qualified to discuss Brady and Graham. He was 10 years old when Graham began his career with the Browns in 1946 under Hall of Fame coach Paul Brown, Mike’s dad. Mike, 85, has been around professional football since and has owned the Bengals since 1991.

“Well, Otto’s my favorite,” Brown said. “He was a player who meant so much to the Browns. I grew up as a young boy watching him.

“He had comparable success to Brady. They were the best of their eras. Football was different in the different eras. In Otto’s time, he was the best. In Brady’s time, arguably he is the best.”

Graham is rarely mentioned when Brady is almost universally recognized as the NFL’s Greatest of All Time. Not only is perspective slanted toward recent events, the NFL gives extra weight to the Super Bowl era, which began in 1966 after Graham’s career and the Browns’ glory years had ended.

The Browns began play in 1946 and won all four All-America Football Conference championships before joining the NFL in 1950. They earned instant credibility by beating the defending NFL champion Eagles 35-10 in the opener, then topping the Rams in the title game, as Graham picked up yards running to set up Lou Groza’s winning field goal. Graham lost three straight title matchups — by seven, 10 and one — before winning two in a row and retiring at 34 years old.

“I think it’s the thing that sets him apart. He was a winner. Brady’s a winner,” Mike Brown said. “That’s pretty remarkable stuff. Otto did it over a shorter span of years. You can argue that that sets him over Brady, or you can argue that Brady was able to do it all the way to age 43 and maybe he’ll continue to do it even more. That’s extraordinary. They’re both extraordinary players. Otto does deserve to be in the conversation when you talk about the top guys.”

Graham, who died in 2003 at 82 years old, didn’t miss a game in his 10 years and made five Pro Bowls. “Automatic Otto” retired after winning championship No. 7 and was inducted into the Pro Football Hall of Fame in 1965. The Browns unveiled a statue of him outside FirstEnergy Stadium on Sept. 7, 2019.

“The thing that Otto had was a certain physicality about him,” Brown said. “He moved in the pocket. He could move outside of the pocket. So when I think of comparables, probably (John) Elway is more comparable than Brady’s style or (Peyton) Manning’s style.

“Otto was a great athlete. He could run with the ball effectively. He chose not to unless it was absolutely necessary in order to protect himself and that protected the team.”

Graham was an All-American football and basketball player at Northwestern University. He played a season in the National Basketball League with the Rochester Royals and won a championship. He then joined the Browns and rushed for 50 touchdowns in 10 seasons.

Anyone who’s seen Brady’s 40-yard dash at the 2000 scouting combine knows Graham was the better athlete. Brady made his career with a strong, accurate arm, subtle movement inside the pocket, great decision-making and the ability to thrive in the biggest moments.

Graham had the same characteristics.

“As a passer, he had the ability that the great quarterbacks have, which is to find the open receiver and to get the ball to the open receiver in a catchable, accurate fashion,” Brown said. “Otto could do it at all ranges.”

The numbers support the testimonial.

Not only did he lead the league in passing yards five times, completion percentage four times and touchdown passes three times, Graham is the all-time leader with 9.0 yards an attempt, more than half a yard more than anyone else in history. Hall of Famer Sid Luckman and Chiefs quarterback Patrick Mahomes are second at 8.4. Brady ranks tied for 29th at 7.5.

“That has always been considered the principal standard, and that’s the one that seems to identify the top quarterbacks best,” Brown said. “And it speaks well for Otto that he registers well in that category.”

NFL Network ranked Graham No. 16 in 2010 on its list of greatest players. Brady was No. 21 after winning three Super Bowls. Hall of Fame coach Don Shula presented Graham after growing up watching him then becoming a teammate.

“Otto certainly has to be one of the best of all time,” Shula said during the video. “All you got to do is look at his accomplishments. You go and look at Otto’s record, and all he ever did was win championships. And how else do you judge a quarterback. Every season that he lined up the Browns were in the championship game.

“It’s hard to pick anyone any better.”

Running back Jim Brown was ranked No. 2 on the list, behind 49ers receiver Jerry Rice, but Mike Brown gives Graham the edge in Browns history.

“He was the Browns’ greatest player,” Mike Brown said. “Those who were fortunate to see their history the way I did, which is most of it, the player who is at the top of the heap is Otto.

Which is why Brady gets all the love he does.

Brady is a three-time MVP who’s completed 64 percent for 581 touchdowns, 191 interceptions and a 97.3 passer rating. He had to play more games in a season, beat more teams (the NFL was 13 teams in 1950 and 32 in 2020) and win more playoff games than Graham did to earn a ring. At the most, Graham claimed a title with two postseason wins, while Brady has needed at least three, including four this season.

Terry Bradshaw and Joe Montana won four Super Bowls apiece, and Elway made it to five, winning two. Brady’s separated himself from everyone in the last three generations.

“He’s the player that they are seeing, the one they remember,” Brown said. “They didn’t see Otto. And Brady, let’s admit it, he’s special, too. You tend to give a little bit more credit to the ones who are recent.”

“I’m glad you’re onto this as a topic because Cleveland should be proud of Otto,” Brown said. “He was their player and I wish more of them had had the chance to see him play that I had. He deserves it.”