Commentary: For once, QB quandary is not part of Browns’ vocabulary 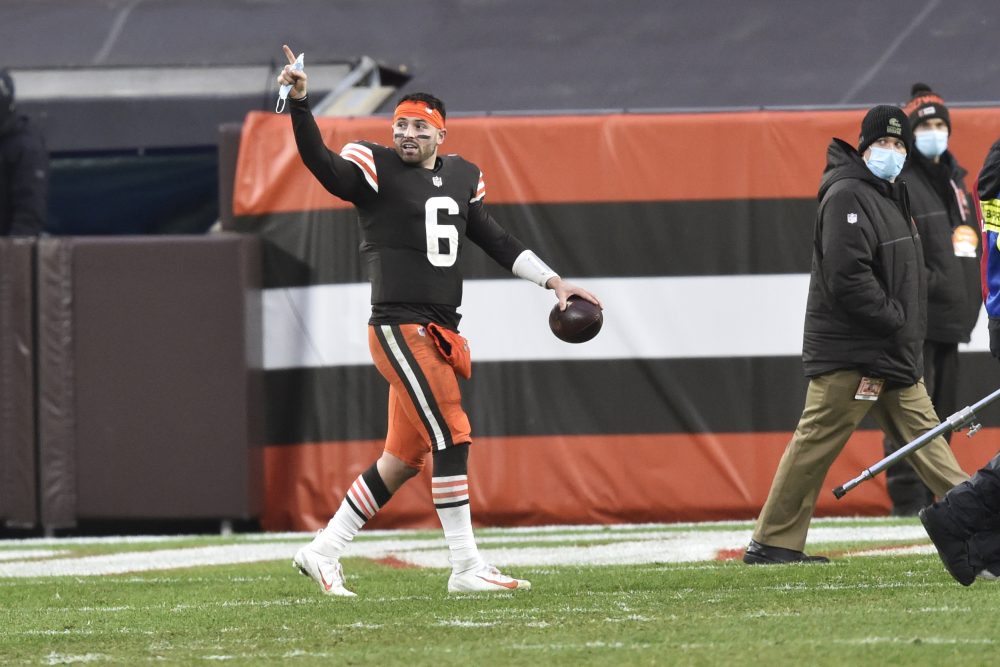 Remember the bad old days, when every team in the NFL had a quarterback but the Browns?

Welcome to the good new days, when almost nobody has a quarterback BUT the Browns.

Has the quarterback landscape in the NFL ever been this skittish? This unsettled? This Vinny Testaverde-ish? It’s seemingly chaos everywhere. With only a handful of exceptions, most of the NFL quarterbacks fall into one of three categories. They are either unhappy, just got over being unhappy or are about to become unhappy.

That’s because all NFL quarterbacks also fall into one of two other categories: Tom Brady and Not Tom Brady.


The leaders in the grumpy quarterback clubhouse this year are Deshaun Watson, Russell Wilson, Aaron Rodgers and Dak Prescott. Other quarterback situations are merely disjointed and unsettled, but worth examining.

Here is a brief roundup of the quarterback situations on selected NFL teams:

DOLPHINS: Tua Tagovailoa, unless they trade for Deshaun Watson.

JETS: Sam Darnold, unless they trade for Deshaun Watson.

TEXANS: Deshaun Watson, unless they trade him or he doesn’t show up.

JAGUARS: They’re still trying to decide whether to use the No. 1 pick in the draft on Trevor Lawrence or stick with Gardner Minshew II. Bet you’re glad you don’t have that tough nut sitting on your plate, huh?

RAIDERS: Derek Carr, unless they trade for Deshaun Watson.

BEARS: Nick Foles or Sid Luckman, unless they trade for Deshaun Watson.

SEAHAWKS: Geno Smith, unless they don’t trade Russell Wilson or they do trade for Deshaun Watson.

COWBOYS: Dak Prescott, unless they trade him for Deshaun Watson.

THE WASHINGTON FOOTBALL CLUB AT THE DISTRICT OF COLUMBIA: Alex Smith or Taylor Heinicke.

CHIEFS: Chad Henne. But that’s not etched in stone.

All this, or some of this, could change, of course, during the draft. This is reportedly a quarterback-heavy draft, to the point that four of them could go in the first two picks.

Other situations are still up in the air. The Cowboys still refuse to pay Prescott fair market value for having to play for Jerry Jones. The Steelers have reportedly asked the rapidly declining Ben Roethlisberger to play for free this year, while Roethlisberger is demanding at least $100 per game. It remains to be seen whether Carson Wentz, finally out from under the shadow of Nate Sudfeld in Philadelphia, is the answer for the Colts.

Then, improbably enough, amidst all this turbulence, you have the cozy quarterback oasis in Cleveland with flip-flop-wearing, tropical drink-sipping, carefree conquistadoring Baker Mayfield proprietor.

Who’d have thunk it?

The NFL’s former quarterback black hole has become a villa on the Mediterranean. Not coincidentally, the Browns are basking in the afterglow of their first trip to the playoffs since the team’s recreation director was Butch Davis.

Nothing removes the stress from an organization more than, after winning 11 games and making the playoffs, not having to spend the offseason searching for a quarterback, having to hire a new head coach, while also conducting endless interviews with candidates to become the new general manager.

While many of the other NFL teams are in full scramble mode, the Browns are in the backyard putting up a badminton net and croquet wickets.

That’s not to say the lemonade is flowing at Club Stefanski. The defense still needs some mortar, but the framework of a championship team is in place, starting with the two most important pieces of all — the coach and the quarterback.

The fabulous Baker boy may not walk with the league’s elite at that position, but he’s good enough, he’s feisty enough and he’s leader-ly enough to win the big trophy. More impressive still: after a wobbly 2019, Mayfield, with his career in Cleveland on the line, had a career year. An “I’m your guy” year. A year to build a dream on — starting this year.

So while half the league’s teams continue to look under rocks for a quarterback capable of being a franchise quarterback, whatever that means, the Browns aren’t one of them. The Browns have one of what they’ve been looking for since before Mayfield was born (feeling dangerous) 25 years ago in Austin, Texas.

FYI, the last quarterback to lead the Browns to a championship, Frank Ryan in 1964, was also from Texas. Fort Worth, just a three-hour drive from Austin.

For now, what’s refreshing is that for the first offseason in too many offseasons, Browns officials aren’t at Defcon 2 in frantically trying to find a quarterback and assemble a team capable of disassembling other teams.

All that’s left is trying to figure out a way to stop Chad Henne.