Mailbag: What happens now that J.J. Watt’s not coming to town? Could Baker Mayfield benefit from waiting to sign extension? Should Odell Beckham Jr. be traded? 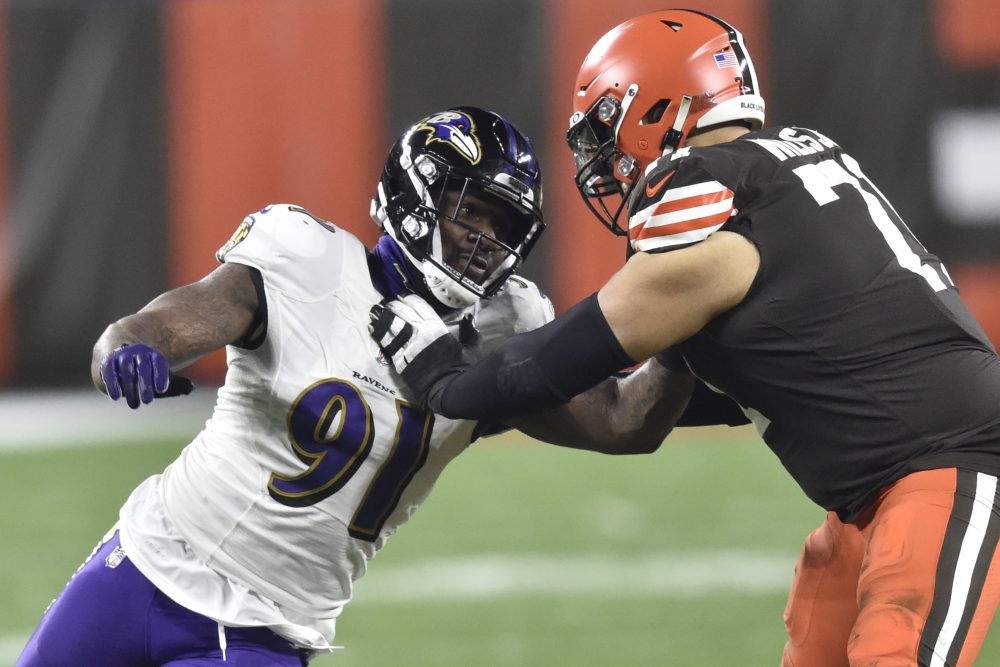 Q: Who are some non-J.J. Watt defensive free agents you think the Browns will be in the conversation for?

A: The good news is the list of candidates is long. As much as I thought Watt would be an ideal fit for the Browns, his decision to sign with the Cardinals isn’t the end of the world. The Browns should, and I believe will, focus most of their attention at defensive end and cornerback, with safety and linebacker following.

With that in mind, here are some of the players who jump out to me as potential targets: ends Yannick Ngakoue, Carl Lawson and Leonard Floyd, cornerbacks Shaquill Griffin, Troy Hill and Brian Poole and safeties John Johnson III and Anthony Harris, who could be too expensive but has always seemed like a fit.

Q: Is it a better idea to take the $16M it would take to sign J.J. Watt and invest it in younger, cheaper defensive linemen? I’d be worried about making Watt the sole upgrade on the line, given Watt’s injury history.

A: You asked this before Watt picked the Cardinals on Monday. But it’s still applicable.

I wrote the day after Watt was cut by the Texans that the Browns should offer him a two-year, $30 million contract and be flexible enough to go beyond that. If the Browns had agreed with me, I believe Watt would be in Cleveland today. But the front office seemed reluctant to pay Watt that much.

I understand why. Watt has missed 32 games since 2016 with a variety of injuries, so there was certainly a risk factor in handing him $23 million guaranteed as the Cardinals reportedly did.

Other linemen may command similar dollars in free agency, but they’ll be younger and less risky. They also won’t have the resume of Watt. Whether the Browns swing for the fences with a big-money defensive end — I think they will — I’m convinced they won’t stop there. I expect them to add multiple edge rushers, and wouldn’t be the least bit surprised if the top free agent and a second-day draft pick were edge rushers.

Q: It’s been reported that the top offer to J.J. Watt is in the $15 million-$16 million range. I don’t think Andrew Berry offered that much. What do you think the Browns offer was/would be?

Piggybacking off the answer above, I would guess the Browns stopped at $12 million or $13 million a year. The bigger issue could’ve been the extra $10 million in guaranteed money agreed to by the Cardinals.

Q: What are the odds on the Browns signing middle-of-the-road free agents like Carl Lawson and Mike Hilton while passing on big-ticket players with more recognizable names?

A: First, I’m going to disagree with your characterizations. While I agree Hilton is middle of the road, Lawson is a top-flight free agent. Spotrac.com projected his contract at four years, $40 million.

But addressing your overall point, I’d be stunned if the Browns don’t land at least one big-name, big-money defender, either in free agency or through a trade. It will be a defensive end or cornerback. So I’d put the odds at 10-to-1 for your scenario.

I expect the Browns to fill in the defense with lower-tier players, but general manager Andrew Berry is aggressive by nature and won’t get away from that coming off the team’s first playoff appearance in 18 years.

Q: Fans talk about a Baker Mayfield extension as if it’s all on the front office. Any chance Baker doesn’t want to sign a deal right now, but rather gamble on himself having a big year in second season with Kevin Stefanski? Thus setting up a bigger payday next year?

A: That’s a great question.

I don’t know where Mayfield’s head is in regard to an extension. I do know there are multiple reasons he would elect to delay signing one until after the 2021 season. Your reason is likely the biggest one. Quarterback salaries only go up each year, and usually by several millions of dollars. So if Mayfield continued the improvement he made in the second half of 2020 throughout 2021, he’d be able to sign the second-highest contract in NFL history, behind only that of Kansas City’s Patrick Mahomes.

Mayfield could also have questions about whether he wants to commit long term to Cleveland. He’s watching his peers try to take control of their futures, and that’s a lot easier without the shackles of a long-term deal.

Of course, there’s risk to waiting. He could get hurt or not play as well, which would potentially cost him tens of millions of dollars. The situation certainly deserves close monitoring — on both sides — in the next few months.

Q: What is it going to take for the Browns’ fan base to accept and commit to Baker Mayfield?

A: First of all, being a fan doesn’t require blind and complete allegiance. If some fans would prefer Deshaun Watson or don’t trust or don’t like Mayfield, that’s their prerogative. Having said that, I think a large majority of fans support him and want him to stay and succeed. But I won’t argue that those who don’t like Mayfield can be vocal, especially in the vacuum of the offseason and in the cesspool of social media.

Q: Should the Browns trade Odell Beckham Jr. to clear up cap space, so they can build the defense through free agency, draft Rondale Moore with the 26th pick and keep Jarvis Landry and Rashard Higgins as Baker’s top targets?

A: I’ve been consistent in saying the Browns should keep Beckham. I’d like to — and believe the Browns also would — see him healthy for a full season and what he can do in the second year in coach Kevin Stefanski’s offensive system. The potential is intoxicating, and the Browns can’t afford to take a step back at receiver when the goal is reaching the Super Bowl.

But I understand the draw of your proposal. If the Browns traded Beckham and were able to rid themselves of the $15.75 million salary for 2021, they would be able to address multiple areas. They would need the proper plan at receiver. I like Moore’s potential and would be fine with him at No. 26 but think a proven veteran would also need to be added. I don’t think Higgins is a strong enough No. 2 receiver and am hesitant to forecast a rookie immediately stepping in as a starter.

Q: Do the Browns need to improve their speed at the 2 starting WR spots? At this point, can OBJ be relied on as the deep threat receiver? Does Jarvis Landry basically play quasi TE rather than WR? Rashard Higgins is another possession receiver. What do you expect?

A: If the Browns have Beckham, they don’t need to add speed to their starters. If he’s healthy, Beckham remains one of the fastest, most explosive receivers in the league. Landry obviously isn’t the fastest wideout, but it’s unfair to label him a quasi-tight end. He gets open downfield plenty, remains an upper-tier receiver and pairs well with Beckham.

I would recommend the Browns add another speed element off the bench. Donovan Peoples-Jones takes awhile to get going but has downfield speed, so I would add a quick receiver who can play in the slot, catch a bubble screen and take an end-around.

If Beckham is removed from the equation, the Browns would need to add speed throughout the position group.

Q: Who’s on the roster today that is a good candidate to contribute unexpectedly next year? I’m thinking practice squad or young special teams guys.

Q: A week ago I wouldn’t have asked this question, but Jarvis Landry’s cryptic tweet last week has me wondering whether Andrew Berry approached Landry’s agent to attempt to start the ball rolling on a restructure of Landry’s contract similar to what was done with Chris Hubbard last season? Restructuring contracts almost always means the athlete accepts less money, in that case shouldn’t Landry play poker right back & refuse any concessions? In my view Landry represents everything Browns fans value in a football player, but might cap space and analytics might force a confrontation?

A: I was asked about the tweet on the 92.3 The Fan on Monday, and I’m assuming you both were referring to the one that starts “If One Door Closes…” First of all, I think it’s dangerous to read into any tweet. He could be referring to anything.

But there has been enough speculation about Landry’s future to address the topic. He’s due $13.25 million in 2021, and any number that big is a possibility for restructuring, especially with the salary cap being reduced this year. But I don’t think the Browns would try to strong-arm Landry into a new deal. He’s too valuable and too important to the organizational turnaround.

The Hubbard comparison misses the mark. He had struggled and was being demoted from starter to backup. Landry is still highly productive and isn’t in line for a pay cut. Rather, I could see the Browns trying to lower his cap number by adding years to the end of the contract. I could be badly misreading the situation but I just don’t see a scenario in which Landry isn’t here next season and making a ton of money.

Q: It is my sense that the biggest question regarding the Browns’ offseason is how mindful they will be relative to preserved chemistry vs. infused talent. Management seems sufficiently astute and sensitive that they’re quite aware it takes more than an assemblage of skill to create a team, an inestimable concept that persistently displayed itself throughout the unfolding weeks of 2020. There was evident buy-in, cohesion, a family spirit and resolve demonstrated, priceless energies conducive to winning in so demanding a team sport. So I ask how things will be balanced as the new year approaches.

A: I trimmed your question, but you also referred to keeping defensive players who might not have had the greatest seasons but were invested, contributors and had overlooked roles such as signal caller and leader. I think you’re onto something.

While I certainly expect an “overhaul” of the defense that might be limited to two or three starters. The role players that are so important could come from the crop of players signed to one-year contracts a year ago in free agency — linebackers B.J. Goodson and Malcolm Smith, nickelback Kevin Johnson and safety Karl Joseph. There is something to be said for continuity and familiarity. I’d expect at least a couple of these guys to be back.

To your larger point, I agree a balance must be struck and I would trust Berry to find it. While I expect him to be aggressive in adding players through free agency, I do think the approach will be targeted and won’t necessarily include sweeping change.

Mailbag: How does league-high carryover affect Browns’ salary cap space? Can fans count on Kevin Stefanski for long haul? What about trading Odell Beckham Jr. to Packers?
Where will Browns find starting defensive end? Who in secondary has best chance to be re-signed? Will fans be disappointed in free agency?