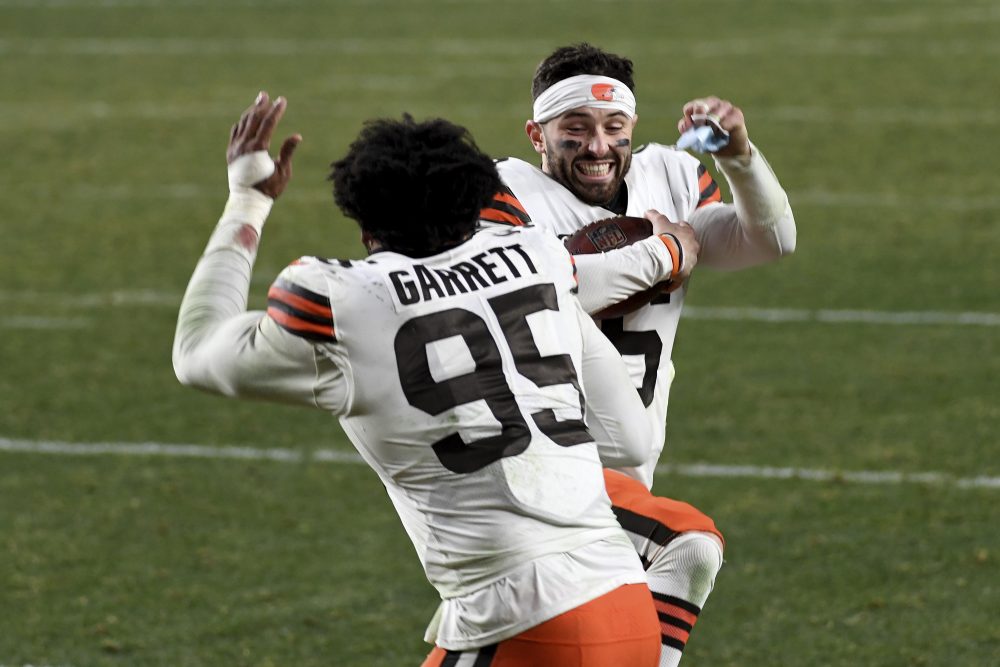 Different has become all too typical in the past 12 months.

The 21st Greater Cleveland Sports Awards were no exception, going virtual for the first time Thursday night. No local legends roamed a downtown Cleveland hotel. No fans rubbed elbows with their heroes. No ballroom was packed.

The unusual night and hour-long TV broadcast reached a fitting conclusion when the Browns won the award for Best Moment in Cleveland Sports. There hasn’t been much occasion for the Browns to take the spotlight in the more than two decades of the annual awards.

The Browns won the same award in 2019, but that was for ending a 19-game winless streak. The success was better sustained this time, as they went 11-5, snapped a 17-year postseason drought and won their first playoff game in 26 years.

“It was an amazing year in a year of a lot of uncertainty,” quarterback Baker Mayfield said in a recorded message, saying it was “truly humbling” for him to speak on behalf of everyone involved in the season, including the daily COVID-19 testers. “To be able to have found bright moments like the one that we just saw, something special, truly so special that I won’t ever forget and I know everybody that was involved won’t either.

“It means so much to the city of Cleveland. That’s why you saw so much passion and joy in that highlight tape right there, because everybody was a part of it. It was a whole team playing as one. It means so much for us to be able to give back to the city. Hopefully we have a lot better moments and there’s more to come.”

GM Andrew Berry grateful for Baker Mayfield, expects him to have “fantastic” 2021

Speaking of strange … because the broadcast was taped, no one had the chance to ask Mayfield about his Wednesday night tweet that went viral.

“Almost 100%, Em and I just saw a UFO drop straight out of the sky on our way home from dinner…” he tweeted, referring to wife Emily. “we stopped and looked at each other and asked if either of us saw it… Very bright ball of light going straight down out of the sky towards Lake Travis. Anybody else witness this?”

The observation drew a lot of attention. The tweet had more than 36,000 likes by 8 p.m. Thursday, and Tom Brady joined the discussion. He replied to Fox Sports’ Colin Cowherd, a Mayfield antagonist who said on his show that Brady, Joe Montana, Terry Bradshaw and Troy Aikman had never seen aliens.

“At your age you’ve probably seen a bunch..” Mayfield responded, with three “rolling on the floor laughing” emojis.

Almost 100%, Em and I just saw a UFO drop straight out of the sky on our way home from dinner… we stopped and looked at each other and asked if either of us saw it… Very bright ball of light going straight down out of the sky towards Lake Travis. Anybody else witness this?

On a much more serious note, Cavaliers forward Kevin Love was named Humanitarian of the Year after sharing his struggles with mental illness and creating the Kevin Love Fund.

“Thank you to everybody who’s been a part of my story,” he said. “I’ll continue to be an advocate, just continuing to eliminate the stigma. We’ve been through a very tough year in 2020, which is bleeding into 2021, but I think we can come through this very strong.

A Vermilion teenager shared the spotlight with the multimillionaires. Camryn Colahan was given the Cleveland Clinic Sports Medicine Courage Award for her battle with alveolar rhabdomyosarcoma — a rare soft-tissue cancer.

She was diagnosed in 2018 when she was 15, returned to the volleyball and basketball courts and beat the cancer. She’s feeling “great,” is back to normal as an athlete and plans to play volleyball at Wittenberg University next year while majoring in psychology.

“Looking back on it, now I do think that I have had a lot of courage,” she told The Chronicle-Telegram. “It has been quite a road of recovery.”

Colahan was thrilled to be recognized by such a big organization and planned to watch the show at her house with friends. She was a bit bummed she wouldn’t be mingling with the other award winners.

“Unfortunately we can’t do the whole thing in Cleveland, the event,” she said.

Kent State quarterback and Midview graduate Dustin Crum was a finalist for College Athlete of the Year but lost to Iowa State linebacker Mike Rose from Brecksville-Broadview Heights.

The Greater Cleveland Sports Commission, which puts on the awards, announced the 2024 Pan-American Masters Games will be held in Cleveland during the summer of 2024.

The multisport event is expected to be the largest international gathering in Northeast Ohio’s history, attracting more than 7,500 athletes from more than 50 countries. The games are held every four years for athletes 30 and older, featuring nearly 20 sports, including track and field, tennis, basketball and cycling.