Analysis: Bengals defensive end Carl Lawson should be No. 1 target in free agency 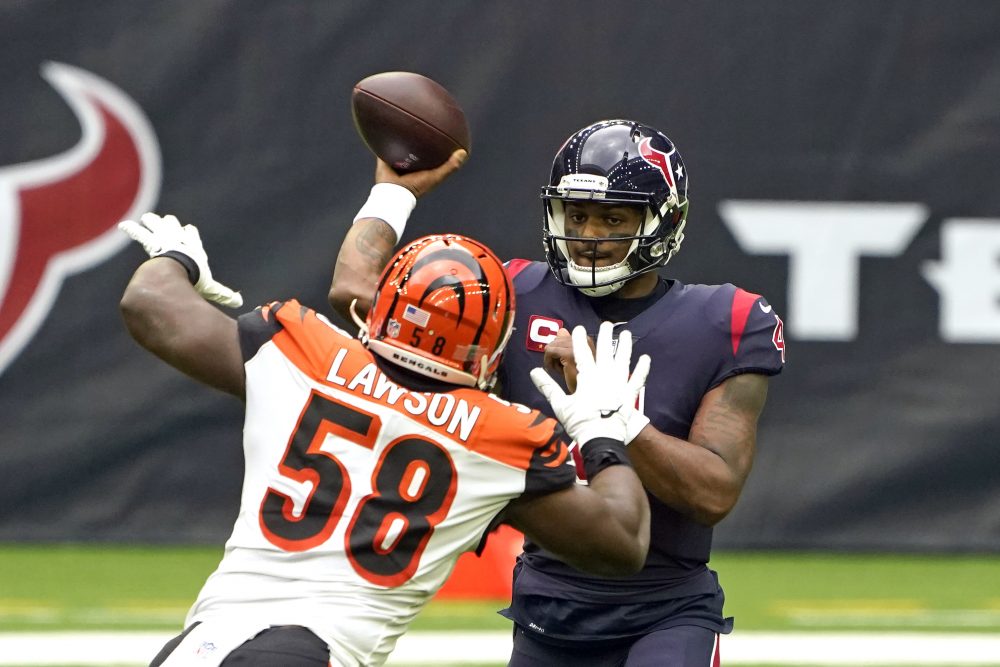 General manager Andrew Berry will make a million — give or take — decisions during free agency. He must decide what positions to target, which players he prefers, how much money he will offer and how high he’s willing to go.

All while 31 other teams pursue the same players.

Free agency is too diverse for there to be one right solution to the complicated puzzle, but here’s the blueprint I’d recommend for Berry as the negotiating period starts Monday. Signings can become official Wednesday at 4 p.m. as the league year starts.

The first order of business for Berry and the Browns is finding a starting defensive end to pair with All-Pro Myles Garrett.

A strong pass rush changes a defense and games, especially when it comes from the front four and without a blitz. Coordinator Joe Woods sent a fifth rusher only 21.3 percent of the time in 2020, 30th in the league. So philosophically that demands a dominant defensive line.

Not that it should’ve been necessary, but the Super Bowl was a timely reminder that an effective pass rush can stop even the most high-powered offense. Taking advantage of a Chiefs offensive line decimated by injury, the Buccaneers made life impossible for quarterback Patrick Mahomes, who was harassed all game. Kansas City never established anything, and the Bucs were relentless as they blew out the defending champs.

How aggressive will Andrew Berry be in free agency in Year 2?

Olivier Vernon isn’t the flashiest defensive end and he’d go through sack droughts, but he proved to be reliable, tireless, sturdy against the run and capable of stringing sacks for the Browns. But he’s 30 years old, is a free agent and won’t be ready for the start of the season after his Achilles tendon ruptured Jan. 3 in the regular-season finale.

So Berry has no choice but to find a replacement, and he should shoot for a playmaker. The free agent options will be plentiful, so it’s up to Berry to match the player, the contract and the fit it in Woods’ 4-3 scheme.

Tampa Bay’s Shaquil Barrett and Pittsburgh’s Bud Dupree may be the most talented, but they’re more natural as outside linebackers in a 3-4 and will cost too much, especially after Garrett signed a five-year, $125 million extension in July. It wouldn’t be wise to devote another $18 million or $20 million to the other end, despite the importance of the position.

When talent, cost and fit are considered, Cincinnati’s Carl Lawson tops my list. Lawson may end up back with the Bengals, but they didn’t use the franchise tag to guarantee his return and he’s expected to test the market.

Lawson (6-foot-2, 265 pounds) was a fourth-round pick out of Auburn in 2017 and didn’t become a starter until this season, so his best days are ahead. He had 8.5 sacks as a rookie and 5.5 this year but has never had a player like Garrett on the other side.

Free agency will be all about the defense, with pass rusher the top priority

Lawson, 25, plays hard, is athletic and should feast on the single teams prevalent with Garrett drawing so much attention. The risk is that he’ll never reach double-digit sacks, but the No. 2 end on most teams comes with deficiencies. Lawson is worth $8 million-$10 million a year if the Browns can get him for that.

He doesn’t play as strong against the run as his size suggests and only played 53 percent of the snaps but he’s fast, can get to the quarterback in multiple ways and never stops hustling. The Browns would expect more snaps for $10 million a year and the concern is he’s a one-year wonder, but the consistent effort this season convinced me he’s worth it.

Detroit’s Romeo Okwara, 25, would be next on my list. He could be higher in the Browns’ ranking if they value power over speed opposite Garrett, who’s the ideal combination of both.

Yannick Ngakoue has a strong resume but only played part time for the Ravens and doesn’t have the burst of the other candidates.

Berry should act quickly in securing the pass rusher. The need is too great to get cute and hope to find a bargain later in free agency.

The $25 million in salary cap space allows for an expensive signing, and defensive end should be it. I would be surprised if the Browns don’t have a deal done by Wednesday.

They’ll still need another end after releasing Adrian Clayborn on Tuesday, but can wait for a cheaper veteran later in free agency or an early round draft pick. I’d get one of each.

Berry’s work won’t be done if he signs Lawson, Hendrickson or any of the other pass rushers. Step 2 should be landing a cornerback.

I’d try to re-sign Terrance Mitchell, who played more than 1,000 snaps in 2020 in place of the injured Greedy Williams. The solid performance as a starter could push Mitchell out of the Browns’ price range on the open market, but he’s a valuable veteran to have if Williams and a rookie aren’t ready.

If Mitchell leaves, I’d focus on a cheaper option with slot experience. Kevin Johnson battled through some difficult circumstances last year, but an upgrade is in order. The Jets’ Brian Poole and Pittsburgh’s Mike Hilton would be my top targets.

Berry can wait to execute the rest of his plan. The market will be loaded with talent and he can be choosy and stingy with the offers.

When the time is right, I’d take a flier on Colts safety Malik Hooker, who’s been beset with injuries but is a really good player. A speedy receiver would also be on the list, perhaps Cincinnati’s John Ross or Buffalo’s John Brown, who was cut last week.

I don’t expect receiver Rashard Higgins to return. He’s only a day away from receiving offers from other teams. If one reaches $5 million a year, I don’t think the Browns would match.

Nor should they. He’s a good player but isn’t worth that much money given Cleveland’s roster composition and salary cap status.

He’s under contract for 2021 after the Browns picked up the $6 million fifth-year option on his rookie contract. Berry likes him and he brings speed and leaping ability the other tight ends on the roster don’t, so he’s got value in coach Kevin Stefanski’s system that relies on tight ends. But the right trade offer — a starter in the secondary or at linebacker — would be enough for me to send Njoku packing.

Commentary: For once, QB quandary is not part of Browns’ vocabulary
Analysis: Takk McKinley has upside, but Browns need bigger upgrade at defensive end