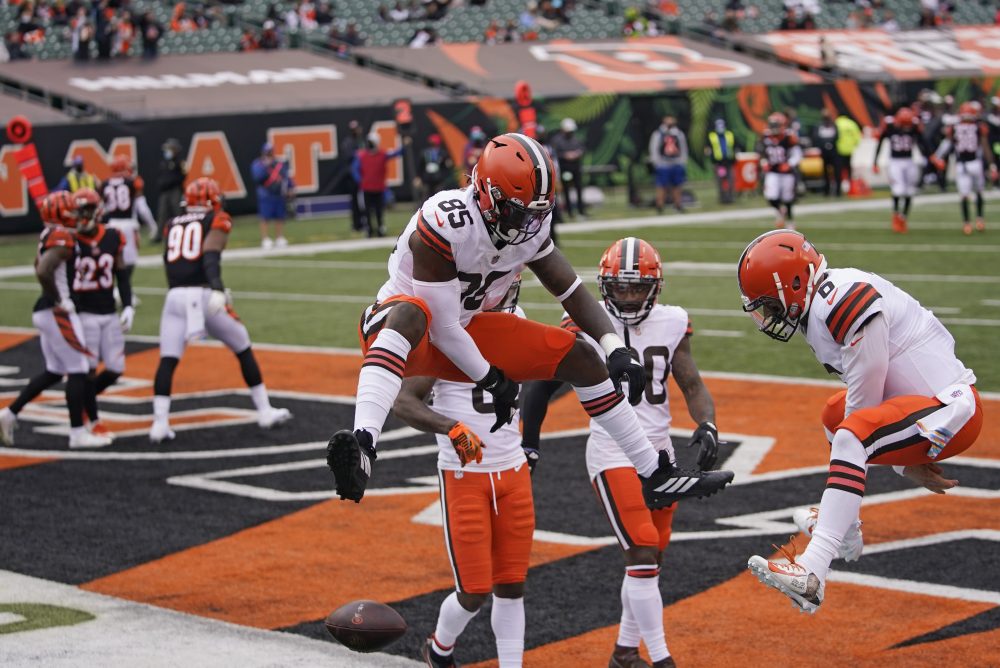 He marked the turn of the NFL calendar by tweeting a GIF of Leonardo Dicaprio toasting in “The Great Gatsby.”

The Browns could’ve cut Njoku before the deadline and saved the money and salary cap space but have been consistent in affirming his value to the team. He requested a trade before last season after he was pushed down the depth chart with the signing of free agent Austin Hooper and the drafting of fourth-rounder Harrison Bryant, but the Browns kept Njoku.

The Browns still have the option of trading him, but he’d make the $6.013 million with his new team.

He played 39 percent of the snaps in 2020, fewer than Hooper (64 percent) and Bryant (56 percent). But Njoku has the most upside of the trio given his rare combination of size (6-foot-4, 246 pounds) and athleticism (he was a national high jump champion in high school).

Smith will be with Cleveland from the start in 2021.

Smith, 31, agreed Wednesday to return to the Browns on a one-year contract just after hitting the unrestricted free agent market, a league source confirmed to The Chronicle-Telegram.

Smith, who was Super Bowl MVP for the Seahawks after the 2013 season, was an important pickup last year, playing 52 percent of the snaps and serving as an integral part of the nickel package. He started four of 17 games, including the playoffs, with 78 tackles, three tackles for loss, an interception, a sack and a forced fumble.

Veteran middle linebacker B.J. Goodson is also a free agent after playing 79 percent of the snaps. With Smith, Jacob Phillips, Sione Takitaki and Wilson due back and the Browns planning to use a lot of three-safety packages, Goodson may not be re-signed.

Defensive tackle Larry Ogunjobi will stay in the AFC North. Just not with the Browns.

He agreed to a one-year deal with the Bengals, NFL Network reported.

Ogunjobi, 26, was a third-round pick out of Charlotte in 2017 and started the last three seasons. He didn’t become a Pro Bowler as hoped but was solid, endeared himself to coaches with his work ethic and evolved into a team leader.

He started all 17 games he played in 2020, including two in the playoffs. He compiled 50 tackles, five tackles for loss, 2.5 sacks, six quarterback hits and a forced fumble.

The Browns never seemed like they intended to keep Ogunjobi, and after the season he spoke as if he knew he would be gone.

Andrew Billings, who opted out of the season due to COVID-19 concerns, is expected back in 2021 and will likely take Ogunjobi’s starting spot alongside tackle Sheldon Richardson. Billings signed a one-year, $3.5 million deal with the Browns as a free agent a year ago after starting 37 games in three years with the Bengals.

Jordan Elliott was a third-round pick in 2020 and should see more playing time.

Add Haason Reddick to the list of big-name free agent pass rushers the Browns didn’t land. Reddick (6-1, 235), who is more outside linebacker in a 3-4 scheme than defensive end in the 4-3 scheme the Browns use, agreed to a one-year deal with the Panthers with $6 million guaranteed and a maximum of $8 million. He had 12.5 sacks with the Cardinals in 2020.

** Special teams ace and nickelback Tavierre Thomas agreed to a two-year contract to join the Texans, NFL Network reported. Thomas spent three years with the Browns, playing 45 games. He made his first three starts this year.

** Special teamer/linebacker Tae Davis, 24, agreed to terms with the Texans, his agent tweeted. Davis played 22 games for the Browns over the last two years but played only 25 total snaps on defense.