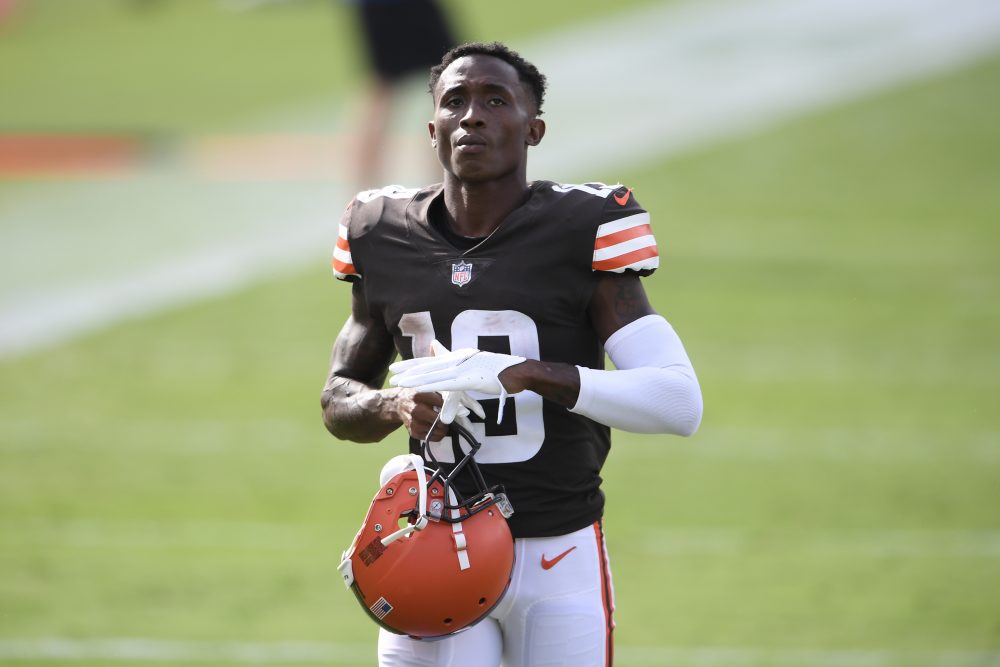 The Browns appear set to bring back their entire receiving corps for the 2021 season.

Receiver/returner JoJo Natson agreed Thursday to return on a one-year contract, a league source told The Chronicle-Telegram. He was an unrestricted free agent.

He averaged 8.3 yards on three punt returns and had one kickoff return for 31 yards. The return game struggled after he was hurt and finished the season ranked 30th in punt returns (4.8 yards) and 14th on kickoffs (22.1).

Natson (5-foot-7, 153 pounds) was injured on a punt return. His right knee bent in an awkward way as he made a cut and he grabbed the knee after he went down. For his four-year career, he’s averaged 7.7 yards on punt returns and 20.9 on kickoffs.

Starting receivers Odell Beckham Jr. and Jarvis Landry are under contract for 2021 and expected to return, as Beckham looks great in his rehab from a torn ACL suffered Oct. 25, four weeks after Natson’s injury.

Rashard Higgins agreed Wednesday night to return on a one-year, $2.38 million deal. The Browns tendered restricted free agent KhaDarel Hodge, who began the year as the No. 3 receiver. And Donovan Peoples-Jones will be in his second season after being drafted in the sixth round.

Natson, who went to the University of Akron, provides a quickness element the others don’t. He was used as a fourth receiver and a speed threat last season, often serving as a decoy on jet sweep action, giving the defense something else to consider.

“Disappointed for him,” coach Kevin Stefanski said after the injury. “JoJo was doing a nice job for us on the offensive side.”

Linebacker Anthony Walker, 25, could be the man to replace B.J. Goodson in the middle of the defense.

Walker, who started 46 games in the last three years for the Colts, made a free agent visit to Browns headquarters, a league source confirmed to The Chronicle.

Goodson is a free agent after playing middle linebacker, calling the defensive signals and emerging as a team leader in his first season in Cleveland.

In addition to Smith, the Browns bring back Jacob Phillips, Sione Takitaki and Mack Wilson at linebacker. Phillips was a third-round pick out of LSU last year and is expected to assume a larger role.

Defensive tackle Larry Ogunjobi will stay in the AFC North. Just not with the Browns.

He agreed to a one-year deal with the Bengals late Wednesday.

Ogunjobi, 26, was a third-round pick out of Charlotte in 2017 and started the last three seasons. He didn’t become a Pro Bowler as hoped but was solid, endeared himself to coaches with his work ethic and evolved into a team leader.

He started all 17 games he played in 2020, including two in the playoffs. He compiled 50 tackles, five tackles for loss, 2.5 sacks, six quarterback hits and a forced fumble.

“To see and be apart of this teams turnaround will always hold a special place in my heart,” Ogunjobi wrote in an Instagram post. “Want to thank my teammates, fans, the entire city of Cleveland, and the Browns organization for welcoming me with open arms and giving me the opportunity to continue my career as a professional.”

Just want to thank God first and foremost for an amazing journey over these last 4 years. To see and be apart of this teams turnaround will always hold a special place in my heart. Want to thank my teammates, fans, the entire city of Cleveland , and the Browns organization.

The Browns never acted like they intended to keep Ogunjobi, and after the season he spoke as if he knew he would be gone.

Andrew Billings, who opted out of the season due to COVID-19 concerns, is expected back in 2021 and will likely take Ogunjobi’s starting spot alongside tackle Sheldon Richardson. Billings signed a one-year, $3.5 million deal with the Browns as a free agent a year ago after starting 37 games in three years with the Bengals. The contract carries over to 2021.

Jordan Elliott was a third-round pick in 2020 and should see more playing time.

Smith won a championship with the Seahawks after the 2013 season and was named Super Bowl MVP. He was part of the Browns team that snapped a 17-year playoff drought last season and agreed Wednesday to return to make another run.

“I think our prospects at success are what have me most excited,” he said on a Zoom call from his home in Los Angeles. “Obviously there is a lot of familiarity here.

“For me, it was about making the best decision for my family, too, as far as taking them to Cleveland and what I saw from being in the city. I am looking forward to the opportunity to play football.”

Smith was a seventh-round pick in 2011 and has played in 117 games with 466 tackles, seven sacks and five interceptions. He’ll be 32 in July, is grateful for another season and doesn’t know if it will be his last.

“I think just the nature of the game is people like young players. That is just how it goes,” he said. “For me, it is just about being happy, going out there and enjoying every step of the way. I think if you look too far in the future, it can be daunting, and it is just not as fun.”

The NFL, the Browns and the Greater Cleveland Sports Commission continue to finalize plans for the draft along the lakefront April 29-May 1. Fans will be permitted, but the attendance will be capped to allow for social distancing.

“We’ve been working with the Browns,” Gov. Mike DeWine said. “I talked to (Browns owner) Jimmy Haslam over the weekend. We are very much aware of it. We know the importance of this event.”

The final schedule and protocols haven’t been released.

Offensive lineman Greg Senat (6-6, 305) agreed to a one-year deal. He was on the team’s practice squad last year before being signed by the Cowboys to their active roster. He made his NFL debut with Dallas, appearing in 10 games.

He was originally a sixth-round pick of the Ravens in 2018 out of Wagner.