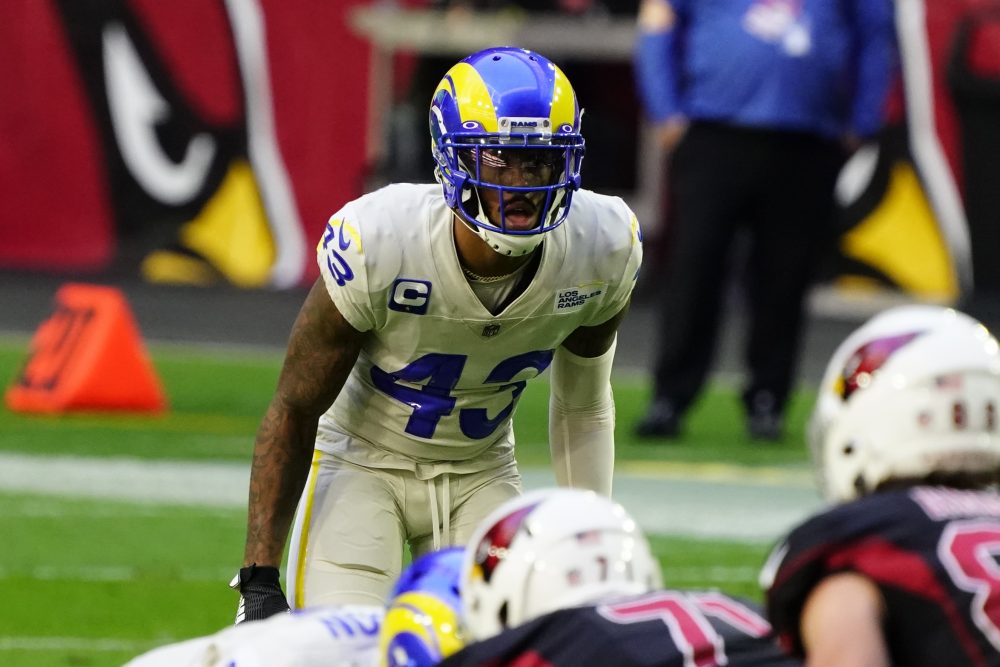 John Johnson III sees an organization on the rise, a city that embraces its team and a pass rusher and cornerback he compares to the best in the business.

The combination made it easy for the free agent safety to pick the Browns, signing the three-year, $33.75 million contract Friday to make it official.

“I felt like it was an opportunity of a lifetime, coming to a situation that things are moving in the right direction,” he said on a Zoom call from Browns headquarters in Berea. “That is rare in this business. It is really a business that it is rare that people care about you, people actually appreciate you and people want to do things the right way. This city as a whole, let alone the organization, it drips that.


Johnson was the Browns’ top target in free agency after he proved in four years with the Rams to be a smart, versatile tool in the secondary. He said he won’t “waste or soil” the opportunity.

“I automatically think of with great power comes great responsibility,” he said. “I see it as I have to come right in and get to work. Things that I was doing at the Rams, I can’t do that here. I have to be an even truer professional. People speak that I am a true professional, but I have to ramp things up a little bit.

“That is why they brought me in — to establish a great defense, which we have the foundation to do it. But with a guy like me, I feel wholeheartedly that we can take the next step.”

He arrived in town Thursday and was quickly impressed.

“I have a roommate from college, he was born and raised in Cleveland, loves the city,” Johnson said of Boston College teammate Kevin Kavalec, who went to St. Ignatius High School. “He would choose this place over anywhere. He has nothing but great things to say.

“Honestly, I knew that the fans loved their team, supported their team, but when I got here yesterday, people started to notice me already. So that just confirmed everything. I’ve just been hearing things and it’s all coming to fruition and I’m just happy I made the right decision.”

Johnson, 25, was a captain and the signal caller for the Rams’ No. 1-ranked defense. He left defensive tackle Aaron Donald, a three-time Defensive Player of the Year, and cornerback Jalen Ramsey, a two-time All-Pro.

“I see Denzel Ward and Myles Garrett as the same thing,” Johnson said of Cleveland’s cornerback-defensive end combination. “It is funny because we all marvel at the work that they do on the field on Sundays on gameday, but Aaron Donald is probably the hardest-working person I have seen in my life. It is tireless. Sometimes it is like, ‘Aaron, do you have a chill button? Can you stop?’

“I am just looking forward to getting in here with Myles. I have heard great things about him, as well, and that he is pretty similar, so it is going to translate to Sundays. When you have a guy like that who you know is going to get to the quarterback and you know is going to rush hard every single down, it makes your job as a DB a whole lot easier.”

“So what I see right now is a lot of guys that can play football, that love to play football, that have played great football, so I just want to come in and be a leader, just give them tips that I’ve learned over my career, things that I saw even last year that got us to such a great defense, a top-ranked defense,” Johnson said. “I just want to be a guy that people can just feel my vibe and rub off on people.”

“We’re all similar body types, similar skill sets, so just being out there together, hopefully we can all be on the field at the same time giving quarterbacks headaches and just moving all around, just doing different things from a disguise standpoint,” Johnson said.

Delpit, the No. 44 pick, missed his entire rookie season in 2020 after his Achilles tendon ruptured in training camp. That prevented Woods from doing what he planned with the safeties and scheme. Johnson was a priority for the Browns for that reason and as insurance if Delpit isn’t ready by the start of the season.

“We all have versatility. We all can be moving around in different spots,” Johnson said. “When you think about a three-safety contour, usually it is going to be like a dime linebacker or a slot corner like one of us playing a nickel type of position, and all three of us are more than capable of doing that.”

Johnson is also excited to quickly reunite with Hill, who agreed to a multiyear deal Thursday. They played four years together with the Rams, but Johnson didn’t believe Hill when he texted he might be following to Cleveland.

“I know it is still football at the end of the day, but it is kind of like a new journey, and it is kind of good to have somebody who you are comfortable with here,” Johnson said. “We can meet everyone together. I know how he plays, and he knows how I play.

“I think what made us so good is that we did the little things right and with discipline. We did not really have too many times where guys would bust a coverage, were not running to the ball or were not giving an effort. The small things ended up being huge things in the end. I am glad we have him here. I know you all will love him here. It is going to be fun.”

Chief of staff Callie Brownson enjoys Hall of Fame visit, exhibit and growing representation of women in NFL
Takk McKinley says he lost himself over last couple of years, but vows to regain hunger, repay Browns for always wanting him