Mailbag: How did 2021 opponents fare in free agency? Will Browns trade up in draft? Where does salary cap stand? What position will be picked at No. 26? 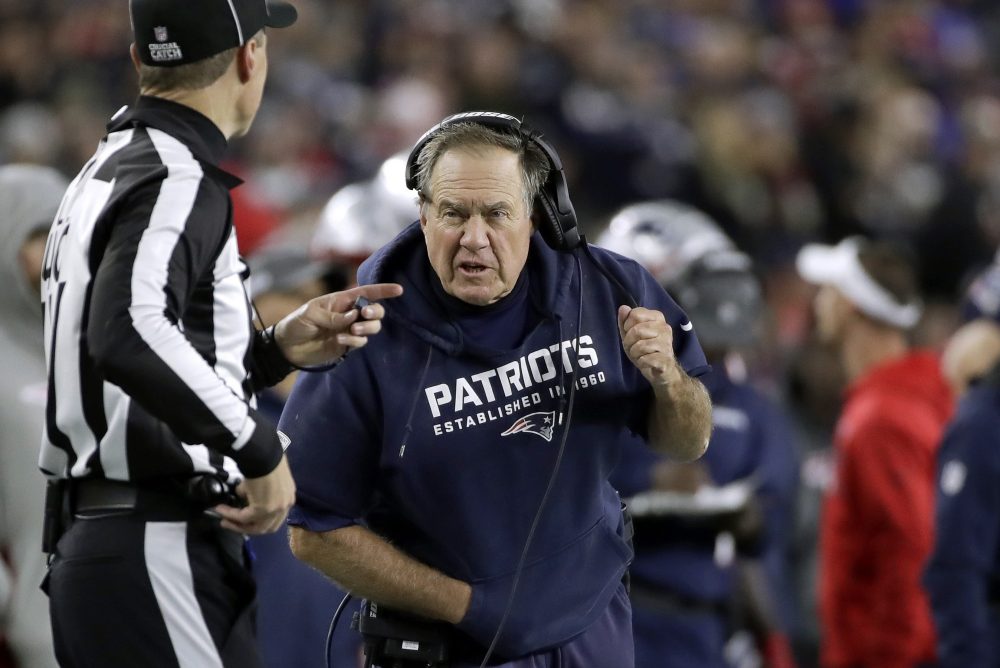 Q: I know there is a lot of movement still to come this offseason, not the least of which is going to be the upcoming draft. After this first big wave of free agency, how do you see the signings or departures for the Browns opponents impacting the upcoming schedule? Is there any opponent who you think got significantly better or weakened?

A: An in-depth question to kick us off.

I’ve got to start with the Patriots after they dominated the headlines at the start of free agency. After a year out of the playoffs, Bill Belichick didn’t mess around as he took advantage of his salary cap space and owner Robert Kraft’s willingness to spend by signing a slew of players. The Patriots might still have a big move ahead at quarterback, but even if Cam Newton is the starter, they made enough moves to make a run at the postseason. Hunter Henry and Jonnu Smith give them a formidable tandem at tight end, and Matthew Judon and Kyle Van Noy will bolster the pass rush and linebacker position. Those are only a few of the moves.


Shifting to the AFC North, I thought the Browns had the best free agency of the bunch. The Steelers lost pass rusher Bud Dupree to the Titans, cornerback Mike Hilton to the Bengals, defensive tackle Tyson Alualu to the Jaguars and cut cornerback Steven Nelson to clear cap room, and their only big signing was retaining receiver JuJu Smith-Schuster. The Ravens weren’t hit as hard by losses as they could’ve been after re-signing outside linebackers Pernell McPhee and Tyus Bowser and defensive end Derek Wolfe. They also made a great addition in former Browns guard Kevin Zeitler. But Baltimore did lose pass rushers Judon and Yannick Ngakoue, so they took a step back at a key spot. And the Bengals failed to make the large leap forward necessary to compete with the Browns, Steelers and Ravens. They replaced defensive end Carl Lawson with Trey Hendrickson and cornerback William Jackson III with Chidobe Awuzie, so the moves cancel each other. Hilton is a good pickup as are tackle Riley Reiff and former Browns defensive tackle Larry Ogunjobi, but they’re not enough to change Cincinnati’s fortunes.

We’ll go quicker through the rest of the 2021 opponents.

The Broncos beefed up the secondary but still don’t have a quarterback. The Bears lost cornerback Kyle Fuller and got quarterback Andy Dalton, but that’s not enough of an upgrade at the position they can’t figure out. The dysfunctional Texans signed a bunch of players the Browns didn’t keep. The Lions didn’t re-sign receiver Kenny Golladay but kept defensive end Romeo Okwara. The Packers re-signed running back Aaron Jones but didn’t do much else, because they never do in free agency. The Raiders spent for Ngakoue but dismantled the offensive line. The Chargers lost Henry but helped the line with center Corey Linsley. And the Vikings added defensive tackle Dalvin Tomlinson and cornerback Patrick Peterson but lost Reiff.

The Chiefs are the biggest hurdle in the AFC and on Cleveland’s schedule. Their offensive line will look completely different than it has. The Chiefs cut tackles Eric Fisher and Mitchell Schwartz but signed guard Joe Thuney and kept guard Andrew Wylie. They figure to make other moves before the season because they must protect Patrick Mahomes.

The league has yet to announce it will add a 17th game, but that’s the assumption, and the Browns would reportedly play the Cardinals. They acquired defensive end J.J. Watt and center Rodney Hudson and lost Peterson.

The Patriots’ spending spree could turn out to be a waste, but I’d say they have the best chance to make a jump in 2021 based on the first week of free agency. I’d put the Cardinals second on the list — I think Watt’s got a huge year in him — and the Vikings third, assuming Pederson isn’t washed up.

I question what the Raiders are doing and need to see Kansas City’s Week 1 offensive line before passing judgment.

Q:
With nine draft picks do you see the Browns using some of them to trade up in the early rounds for a player that they target?

A: I definitely do.

The Browns’ roster is at a level where it can’t handle nine rookies. There just isn’t room.

So I have no doubt general manager Andrew Berry will trade at least two of the picks and probably more in a combination of trading up in this year’s draft and accumulating picks in 2022. The organizational philosophy is to have extra picks each year to keep flexibility.

The trade-up scenario is interesting. When the Browns were going 1-31 and rebuilding, it didn’t make sense for them to spend big resources moving up, although they did it occasionally. But with the Super Bowl as the goal and clearly defined roster needs, I expect Berry to be aggressive if the opportunity presents itself.

So count on a lot of trades by the Browns over draft weekend, including one to move up within the first two rounds.

Q: Has the plethora of free agent signings put the Browns in a precarious salary cap situation? Will the team need to create cap space for its draft picks?

A: A popular and important question. And one that’s a bit complicated.

Overthecap.com is a great site for this, and as of Tuesday at 3:20 p.m., it listed the Browns with $13.8 million of room under the salary cap. But the contracts for free agent signees Anthony Walker and Malik Jackson weren’t included. I’m estimating their combined cap hit to be around $6 million, leaving about $8 million.

That’s more than enough to sign the draft class, but another pricey acquisition through free agency or a trade could require the Browns to get creative to clear space. That could come with a long-term extension for Baker Mayfield or Nick Chubb that lowers his cap figure in 2021, or a restructuring of a contract. Defensive tackle Sheldon Richardson and receivers Odell Beckham Jr. and Jarvis Landry jump to mind as candidates because of their salary cap figures in 2021.

Berry was forthright that the reduced cap in 2020 would affect what he could do in the offseason, but he still has enough wiggle room to accomplish what he wants, even if that is signing another veteran defensive end such as Jadeveon Clowney, Ryan Kerrigan or Carlos Dunlap.

Q: With as much as the 2021 salary cap dropped from 2020, can we expect an historic rise in the 2022 salary cap with the new TV deal and more ticket revenue back in the equation? Do you think this would allow the Browns to keep one or two more core pieces next year that they may have lost?

A: I do expect a significant jump in the cap next year, but I’m not sure it will be historic or as large as people may assume.

First, the reduction in the 2021 cap didn’t cover the entire loss of 2020 revenues due to the pandemic. The NFL Players Association fought to spread out the cap reduction over multiple seasons.

Secondly, most of the new TV deal doesn’t kick in until 2023. I expect the league and union to compromise and spread out the losses and gains so there’s a steady increase in the cap. While that should start in 2022 with a nice spike, I’m not sure it will reach or exceed the $210 million that was projected for 2021 before the pandemic.

But the increase will provide cushion for the Browns as they look to secure Mayfield, Chubb and cornerback Denzel Ward with long-term deals. The Browns will be able to keep all the core players they deem essential.

A: I’ve got it narrowed down to two, with one outside possibility.

Berry’s work in free agency erased any urgent needs and gave him flexibility in the draft. But there are still questions and holes at defensive end and cornerback, so I’d be stunned if the first pick isn’t at one of those spots. They also happen to be the most important on the defense.

The Browns sound like they’re counting on defensive end Takk McKinley to start opposite Myles Garrett, but his production slipped the last two years, including in 2020 when a groin injury limited him to four games. Even if McKinley is the No. 2, the Browns need at least one more pass rusher on the edge. McKinley signed a one-year contract, so a first-round rookie would fit nicely into the equation at end.

Greedy Williams is the big unknown at corner. If he is completely healthy after missing all of 2020 with a nerve injury in his right shoulder and plays like the second-round pick he was in 2019, the Browns have a solid top three in Ward, Williams and Troy Hill. But those are huge ifs. Cornerback is critical enough to use the No. 26 pick on just in case Williams isn’t what the Browns need. There’s nothing wrong with a surplus at that position.

The wild card for me is receiver. I know the Browns appear set to bring back the top six wideouts from last year, but if the right guy fell to them — someone with elite quickness or speed — I could see Berry deciding he’s too good to pass up.

Q: Are we still looking at defensive linemen in free agency or do you think we’re done?

A: As referenced above, I certainly think defensive end remains a need and priority. I think the addition of Malik Jackson along with the expected return of Andrew Billings after opting out of last season leaves the tackle spot in good standing.

Because of the cap constraints, I’m not expecting Berry to spend big on end. He targeted McKinley and landed him relatively cheap — one year, $4.25 million. But Berry knows depth is necessary and that McKinley isn’t a sure thing. So I wouldn’t be surprised to see him add a veteran and an early draft pick at end.

Q: Who are we drafting in the 1st based on free agency pickups?

A: Piggybacking on the earlier answer, here are some possibilities at defensive end and cornerback.

If you want one name: Northwestern cornerback Greg Newsome II.

Q: Is Malik Jackson an upgrade over Larry Ogunjobi?

Ogunjobi has power and quickness and made several plays in the backfield but he’s too thick in the bottom half to be consistently explosive as a pass rusher. I think Ogunjobi has tremendous value and will continue to get better, but for 2021 Jackson is probably a slight upgrade.

Q: How many Super Bowls in a row do we win starting this year?

A: Love the optimism. I’ll go with two. It’s really hard to three-peat.

Mailbag: What will Browns do early in free agency? Why would Bengals let Carl Lawson leave? What about Bud Dupree?
Mailbag: What was best move of free agency? Is organization’s culture strong enough to transform Takk McKinley? Trade up or trade for extra picks in 2022?